Phil Holloway reckons that he’s spent the equivalent of three or four bikes on his pair of Guzzi T3s, but there’s no stopping a man on his hobby horse

Why own two nearly-identical bikes? Phil Holloway didn’t mean to, but he’s ended up with two T3s, one from 1977 and one from 1979. He bought the second one; ‘with the idea of keeping it as a back-up bike or a source of spares. It didn’t work out like that though. I was so impressed with the green bike, tatty though it was, that I started to use it regularly and put it through a steady process of improvement.’

The T3’s dodgy sidestand was replaced with one from a Guzzi G5, while Koni shocks replaced the Marzocchi ones and proved to be ‘much more supple.’ A new seat came from Wessons, and a set of stainless pipes and a Lucas ignition completed the job. It was then; ‘more than good enough, despite its tatty appearance,’ says Phil.

So, logically, the only thing to do next was put the green bike into the garage, take the black one out, and start tinkering with that one. As you do. The black T3 benefited from some of the special parts which graced the green one (including the comfy seat), and was treated to a leadfree conversion from Raceco; ‘it wasn’t strictly necessary but will be useful in future.’ 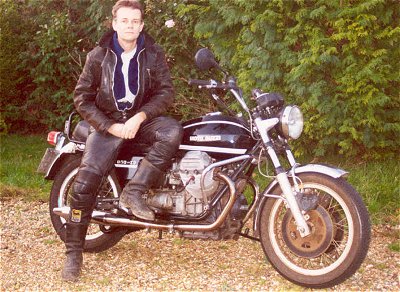 Phil just loves; ‘that engine and the general chunky functionality of the design. I can’t see that I’ll sell either bike in the years to come. They give good reliable service with enough Latin flair to add interest — and Wessons would probably go out of business if I stopped buying spares from them! I haven’t added it all up but I suspect that I’ve spent at least half the value of each bike on extra bits and pieces. Still, if I had all the money back that I’d spent on bikes… I’d just spend it on bikes!

‘And I’m keen to see what Guzzi bring out next…’