Last episode, Michael Eustace explained how he found his Greeves and got involved in Pre-65 off-road racing. After one race he had a fair bit of work to do over winter…

After my first race I then went on to complete another three scrambles by the end of last year’s scrambles season. One at the Mortimer Classic MCC’s ‘Amey’s Copse’ scrambles circuit near Reading and another two with the Pre-65 MXC at Great Bardfield and Maylandsea, both located in Essex.

Over the Christmas period I completely stripped and rebuilt the Hawkstone.

Former Greeves works rider and Dave Bickers’ protÃ©gÃ©, Chris Ginn (Suffolk Stove Enamellers 01473 735585), did an excellent job of powder coating the frame in the original Moorland Blue. Greeves restorer, John Fryatt (01728 830885), galvanised the engine plates and supplied me with a new swinging arm, the old one was bent.

After the final round of 2003 I took the cylinder head and barrel off the engine, something I do after every meeting, to find that the top piston ring had seized in the piston and the bottom of the head and piston crown were severely pitted. So I sent the Villiers lump off to Simon Bateman at Nametab Engineering (01527 522266), who is a Villiers and classic 2-stroke engine specialist. Simon honed the barrel and fitted a suitable sized piston and rings. He also changed the trials gear cluster to scrambles close ratio gears. I hoped that the close ratio gears were going to be a bit closer and, subsequently, give me more top speed from first gear. Simon also set the timing and point’s gap and rebuilt the crank, fitting a needle roller bearing to the big end.

I changed the final drive sprockets to give more acceleration and less top speed, down from a 15T to a 13T on the front and 60T up to 65T on the rear. I was finding I was hardly touching top gear and felt that I would benefit from the extra acceleration whilst I was learning to ride the Greeves. I bought the front sprocket from Simon Bateman who has a wide selection of front sprocket sizes and provides an excellent next day mail order service. The billet aluminium rear sprocket I bought from Super Sprocks (01386 831341), who custom-make sprockets for any motorcycle (it took about a week to come through the letter box). 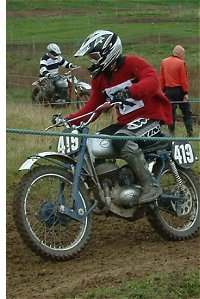 I bought a new chain from Orwell Motorcycles in Ipswich (01473 527401). It was the cheapest chain I could buy since a heavy duty one would wear away the back of the primary drive case — it is a lot wider than the standard chain. A heavy-duty item is hardly needed as the Hawkstone only makes 19bhp tops!

Handling-wise I purchased new front and rear suspension from NJB Shocks (01206 330631). The front dampers were quite simply not damping at all, nor were the rear shock absorbers. I also fitted a new front tyre; the 40-year-old Dunlop was looking a bit low on tread, so off to Jim Aim Motorcycles again to buy a Pirelli MT32 of similar size, which fitted perfectly in place of the Dunlop. I also bought new levers, a fast-action twist grip (a godsend), and Venhill clutch and brake cables.

The first meeting of the 2004 season came in March and I was off to a very wet Marks Tey in Essex with the Pre-65 MXC. The day went really well… apart from the new front tyre, which had considerably taller treads compared to the worn Dunlop, so it was hitting the exhaust header pipe when the front suspension was on full travel. As a result the exhaust began to crack at one of the weld points and the bike began to lose power.

In the two Greeves Series races I finished 16th and 22nd (as a result of the blowing exhaust) out of 35 riders. That’s pretty good when you’re up against more modern Greeves motocrossers such as the 1969 360cc Challengers and early 70’s Griffon 250cc and 380cc Griffons, although the handicap points system does help me out riding an older Greeves. 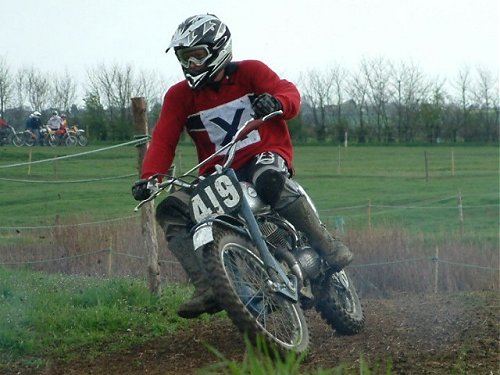 Easter Sunday 11th April was the second race meeting of 2004 at Maylandsea in Essex with the Pre-65 MXC and, with the re-routed and re-welded exhaust system, the Greeves was ready for action again. I’d fitted new front and rear mudguards of the polished aluminium type (SMC Spares Distribution 01728 648213). After landing on my first jump there was a loud bang from the front wheel — it was the front tyre now hitting the new front mudguard and it had bent the mudguard stay.

I still managed a 18th and 14th in the two Greeves Series races taking me to 10th overall out of 42 riders in the Series, and second out of 12 in the Hawkstone-only championship.

So, jobs for the next race meeting are: weld the mudguard stay and drill new holes in the front mudguard. Also fit new competition clutch basket, new clutch friction plates and heavy-duty primary chain from Simon Bateman, as the existing clutch friction plates and basket are worn to say the least. With these modifications complete I will hopefully be at the stage where the bike is reliable in all aspects and I won’t have to worry about it for the next few years.

I’ve been very pleased with the Hawkstone, it’s a great little bike and is great to learn on and is competitive. Although it can be a handful at times it is predictable and is to counteract. If Dave Bickers can do it, I can… maybe!

For information on this event or any Pre-65 MXC events (or maybe you want to have a try at racing yourself or find what the Greeves Scrambles Series is all about?), go to www.greeves.co.uk or email me at michael@greeves.co.uk

Anyone fancy doing some off-road riding?