Most people ride classic bikes on the Queen’s Highway, but some riders never turn a wheel on tarmac. Michael Eustace took to scrambling…

If this time last year you had said to me I was going to be involved in classic motorcycling, let alone racing a classic motorcycle, I would have keeled over laughing. As a 21 year old university student, one year ago I only had eyes for modern bikes. I rode my Suzuki SV650S road bike, covered thousands of miles (it ‘s done 60,000 at present) and completed a few track days here and there. I only ever thought I would race modern machinery…

In June 2003 my father spotted a poster advertising a Pre-65 Motocross Club scramble at Cornard Tye near Sudbury, Suffolk. The event in question was the Tye Farm Suffolk Grand National and I gladly went along as a spectator with my Grandfather, who rides a Norton Model 50, and other Eustace family members. There were nearly 130 riders that day and every one of them enjoyed and contributed to the friendly atmosphere, an atmosphere you may not experience at more modern meetings. From then on I was hooked and I was off to find a bike. But what bike and how many strokes?

I had ridden my father’s 4-stroke BSA C15T trials bike before and was always impressed with the sound and the spread of ‘power’ (such as it is!) so I was veering towards a 4-stroke machine. I then spoke to an old friend of my Grandfather, who scrambles a Greeves Hawkstone in the Pre-65 Motocross Club. He mentioned there was a Hawkstone for sale down at East Grinsted. After a month of wavering I decided on the Greeves. The fact there was a Greeves-only scrambles championship, the only one-make classic scrambles series in the UK, helped me to decide on the Greeves too.

The Greeves I acquired was a 1958 250cc Hawkstone and cost me £850, the right sort of price for a Hawkstone. It had a log book and was originally a 20TA (that’s the model number for a Greeves Scottish trials bike to you and me), fitted with a Villiers 197cc single 2-stroke lump. Since 1958 the bike had been converted to a Hawkstone and the 197cc barrel had been swapped for a 250cc Villiers 33A scrambles barrel, claimed to pump out a whopping 19bhp at 6000rpm.

The next job was to purchase some clothing suitable for scrambling. The rules say you must not wear any brightly coloured clothing. So off I went to Jim Aim Motorcycles (01787 460671) in Sible Hedingham, Essex. I purchased a helmet (£60), armour to wear under a top which covers the back, shoulders, chest, elbows and kidneys (£120), and gloves (£25). I had a pair of trials jeans and boots from my schoolboy trials days and I used an old top to the cover the armour.

Now I had a machine and clothing, so the next stage was to enter a meeting. I live in Suffolk and the nearest classic scrambles club is the Pre-65 Motocross Club, who run scrambles around the East of England. The Tye Farm meeting I had attended as a spectator was organised by the Pre-65 MXC too, so I was already familiar with their race set up. Their next meeting was scheduled for 24th August at Maylandsea in Essex, four weeks away.

I entered for the meeting a couple of weeks earlier than the race date as you can’t turn up and enter on the day of the scramble. This entailed phoning the race secretary for that meeting and he sent me an application for annual membership to the club and an entry form for the meeting, both of which are compulsory for scrambling.

Membership to the club is £16 and entry for a meeting is £25 plus around £10 for a day race licence from the Amateur Motorcycle Association (AMCA), also compulsory. If you plan to do more than 4 scrambles a year I would advise you to purchase an annual race licence from the AMCA which is £45, then it is better value since you do not have to purchase a £10 day licence every time you go to a meeting.

There were only four meetings left that year, three of which were Pre-65 MXC run meetings and one with the Mortimer Classic MCC, so I just bought day licences. For 2004 I purchased an annual race licence from the AMCA (I got the application form from the membership secretary of the Pre-65 MXC when I renewed my membership with them this year).

I feel the fees are very cheap when compared to modern events. I have friends who race modern machinery at modern road race events, they can expect to pay up to £150 just for entry for one race per meeting and that’s minus the cost of getting a race licence and membership to a club! They were surprised to say the least when I told them I get six races for £25 per meeting!

On Saturday 23rd August I was off to Maylandsea, complete with my entire extended family; my father, uncle and grandfather would come in very handy if the bike was going to prove problematic. We helped to erect the track on the Saturday afternoon and I even had my bike scrutineered as I was there. This would normally happen on Sunday morning at 8:30am but as a one-off was done on the Saturday to lighten the load for Sunday morning’s scrutineers. The Hawkstone passed with flying colours – nothing was loose, the brakes worked, head bearings were tight and so on.

Sunday came and at 8:30am I signed on. At 10am the practice sessions started. First out were sidecars for 15 minutes, followed by even race numbered solos: that’s me! The bike started first kick and I was out into my first practice session…

I’d not even completed a couple of laps before my seat fell off and I had to ride the rest of the lap standing up, complete with ‘arm pump’ and a mouth full of dust!

As I questioned my level of fitness, my Father rescued the seat from the middle of the track and it was affixed back to the bike, securing it with a bungee cord for good measure. Out again for another five minutes before the practice session finished.

I had entered into three championships on the day: Pre-60, Pre-65 and the Greeves scrambles series, each having two races each – so I was up for six races, five laps each. My first race came, the Pre-60 race, for machines produced up to and including 31st Dec 1960. 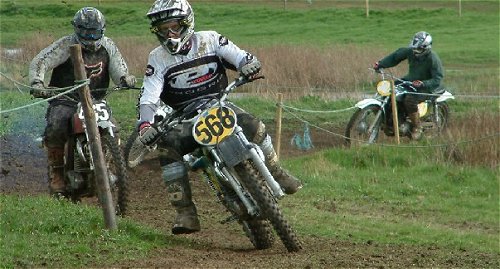 As I sat on the start line alongside 30 other scramblers, sentences such as ‘don’t fall off’, ‘don’t cut anyone up’ and ‘how will I ever be able to compete with the likes of veteran scrambler Jim Aim?’, who was sitting alongside me on his beautifully prepared 1959 built 650cc Orcadian, all came to mind.

The start man waved the Union Jack and we were off. Jim disappeared off into the distance along with twenty other experienced scramblers but after lap one I found myself racing in a group of about four other riders. Even though we were at the back of the field we were having our own race, it didn’t matter that we were battling for 24th place!

The feeling of racing alongside 30 or so other scramblers was amazing, the adrenalin, the smell of Castrol R and methanol.

Why hadn’t I thought of doing this earlier?

What was the most daunting part? Well the jumps were pretty scary at first but I soon learned that, on landing from a jump, as long as the rear wheel hit the floor first you’re less likely to go over the handlebars and into the ropes. And as I’m used to riding modern bikes, where the gear and brake foot levers are on opposite sides to the classic Greeves, everything was back to front. Even the gear shift was opposite, push down to change! The were a few occasions when I dabbed the rear brake instead of changing down a gear…

Even so, my first race was only just the start of it. Then came the work on the bike over winter, and the 2004 season. More on that, later!

Getting down and dirty?