When he was 16, Jerry Fiford wanted nothing more than to own a Goldie. 35 years later his dream came true. Was it worth the wait?

My dream started when, as a B31 riding 16 year old, I envied the guys who owned Goldies. They always had the best girls and could walk into any coffee bar and get admiring glances. To me they were the gods of the cafÃ© scene.

At the age of 51 I decided to stop racing. I was the owner of a Ducati which had won five championships so I knew I shouldn’t have any problems selling it, and I could use the money to buy the much dreamed-about 500cc Gold Star. As luck would have it the guy that bought my Duke had a Goldie to part-exchange so a deal was struck. I became the owner of a 1961 DBD34, complete with a standard steel tank and a 5-gallon Lytre. After trying both I now keep the alloy Lytre tank on the bike as it reminds me more of the 60s biker cafÃ© days – the days I have such fond memories of.

The first few days of owning the Gold Star didn’t disappoint me. I couldn’t believe I was riding my dream bike. After about three weeks I noticed that it was becoming harder to start, and then at Box Hill one evening it totally gave up. Turned out it was the mag. As the bike had not been used for a long time before I bought it the damp had got inside. A lot of older mags have a water-based shellaque on the internal windings and any condensation getting inside will cause the windings to fall apart. I removed the mag and gave it to Stuart Towner in Chessington for a rebuild. After three weeks I got it back and re-fitted it, and away we went with as much trouble-free starting as you can expect from a Goldie!

After about a year I noticed that the BSA was starting to vibrate more than usual so got in touch with Phil Pearson Engineering in Norfolk. He thought that the riveted flywheel assembly was coming apart. So I decided to go for a complete rebuild and let Phil, who is a Gold Star expert, do the work. First job was to have one of Phil’s homemade one-piece cranks fitted, complete with Carrillo rod. We also discovered that my engine was on a 40-thou piston so I went for a new Pearson barrel and standard piston, but with a lower compression ratio to compensate for modern, low octane petrol.

New guides and valves were fitted and the seats changed to suit unleaded petrol. Once the engine was complete and back in the frame I decided to dump the original clutch and fit a Bob Newby belt drive conversion. These clutches are beautifully made and will stand up to the hard work which the Goldie RRT2 close ratio gearbox demands. I decided to stay with the GP racing carb. as I wanted the bike to be externally as standard as possible.

During the running-in period I had trouble getting the bike to not run rich and had leaned it out as much as the carb would allow, with the needle in the lowest notch and the remote float carefully set at correct level. Phil suggested fitting a 1mm stainless washer under the needle jet to lean it out even further, and that did the trick. He told me that with unleaded fuel most old British bikes will run rich so the original factory carburettor settings won’t be any good — it’s a matter of trial and error to get it right. 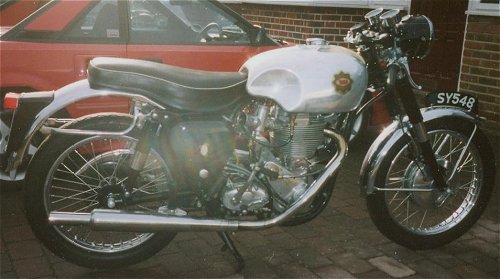 The bike was run for the first 500 miles on Castrol SAE 30 oil and then changed to Castrol SAE 50, getting changed at the next 500 miles. Now that it’s fully run-in the oil gets changed every 1000 miles. Since the rebuild I have done around 7000 trouble-free miles and the valve clearances haven’t needed adjusting at all in this time. I can normally start the Goldie on about the third or fourth kick — but can be a bit of a sod to start once it’s warm as the racing GP carb tends to suck in a lot of fuel. It also tends to not start when people are watching — I put this down to either the bike has a sense of humour or it’s shy!

The RRT2 gearbox means slipping the clutch a bit to pull away but can usually be fully engaged at around 25mph. It will do 60mph in first gear but that’s about it. The other gears are very close and top speed is around 110mph – a reduced top speed due to running much lower compression and low octane fuel. The Goldie was designed to race and many top stars started on them including Phil Read and Derek Minter. For a pushrod single it did extremely well, taking on and beating many overhead cam machines like the Manx Nortons , AJS 7R and Matchless G50.

The handling is excellent and the 180mm front brake works well, and the whole package obviously reflects its racing pedigree. The Gold Star 500cc DBD34 and its smaller brother, the 350cc DBD32, were in great demand as a road bikes for the ton-up boys. The factory sold them complete with a plug-in wiring harness so you could remove the headlight to race it at weekends, then refit your lights and head off to the cafÃ© for some more posing.

BSA stopped production in 1963 but today the Gold Star is still one of the most sought after motorcycles and can demand very high prices. Mine is currently insured for £10,000. But as I waited 35 years to own one I would never part with it, even when I’m too old to start it or get my leg over! 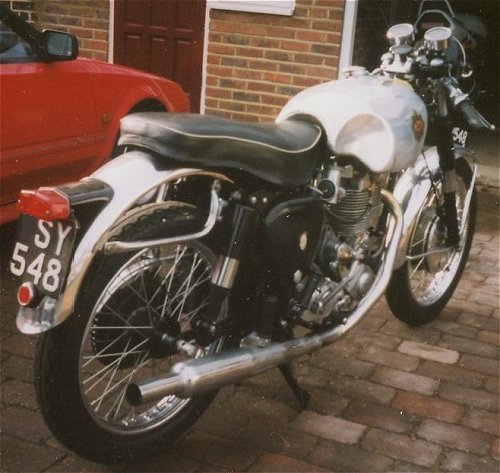