First rule of restorations: be certain you know what you’re dealing with. Initially, Russ Gannicott was certain he was dealing with a 153cc Rossa. Now he’s certainly… confused!

OK, where did we get to? I’d carried out some renovations and modifications to the frame, sourced some rare bits and was about to tackle the job of converting the front end to Aermacchi forks. Well, the fork story is going to have to wait as I’ve uncovered a bit of a mystery. The bike isn’t what I thought it was! All indications pointed to it being a 1954 153cc Rossa, but it ain’t!

With several restorations on the go, the Gilera is a bit of a stopgap project – something I return to when I’m stuck for something to do. And so it was that I found myself looking at the motor one day. The frame and swinging arm had gone off to be painted, the ‘new’ Mazocchis were off with a friend for some caps to be made, the tinware was waiting to be painted as part of a ‘deal’ with another mate and I’d recently finished the seat.

So what was left?

I’d always been pretty happy with the general condition of the motor and, having pulled the head and barrel off, I checked as much as possible for any play in the rod and crank, both which felt fine. I know this isn’t a very professional way of doing things, but with motors like these, the ‘if it ain’t broke, don’t fix it’ idiom is a good one.

The engines are so easy to drop in and out of the frame, it’s worth the gamble to clean it up and see if it runs before stripping it down. So, as I said, I was happy with the general feel of the motor so the only jobs I’d tackle would be routine; check the bore and ring gaps, replace the head and base gaskets, overhaul the points and oil system, etc. 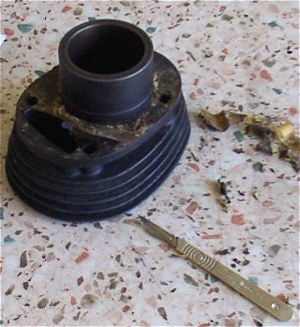 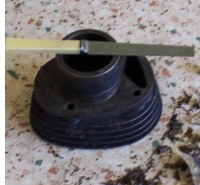 This is a nice point at which I’d like to introduce you to two of my favourite tools – the surgical scalpel and the engineer’s scrape.

The former is my weapon of choice when having to slice off fifty years of gasket goo and old gasket paper, the latter for de-burring aluminium castings prior to reassembly.

You can buy scrapers, but it’s far better to make your own. The best donor for this is the humble knife from a cutlery set – not any knife though, you

want to find those ones with the creamy yellow plastic handles that were all the rage in the Fifties and Sixties. The trick is to grind the edge to a dead straight ninety degree flat – the same with the tip. This effectively gives you four edges to work with when de-burring.

A word of warning here though, don’t overheat the steel when you are grinding it as two things can happen.

1) The steel will lose its temper.

2) The handle will explode!

The handles were made of celluloid which has a very low flash point and once they ignite they are very hard to put out. Not only that, the fumes are toxic and the smoke will coat everything in your shed with a black greasy deposit – nice. Don’t ask me how I know – just trust me on this one! 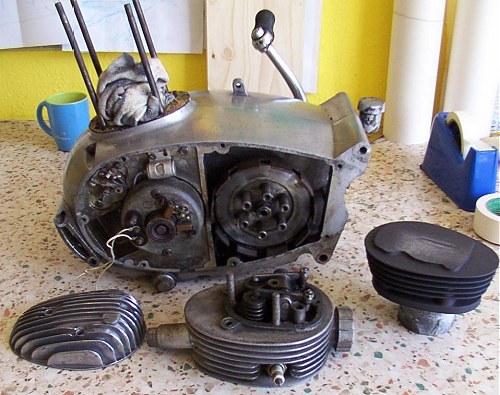 When I had the motor on the bench, it struck me that something about either the bore or the stroke looked wrong, so a quick measure showed that what I had wasn’t a 153cc at all, but a 124cc!

This is where things started getting strange. Gilera’s 125s from this era had a three-speed box and a 16mm carb, mine had a four-speed and a 20mm inlet. My barrel and piston looked standard and there is no way you could fit a 125 barrel to 153 cases, the piston/head appeared to be give higher compression than standard and the valves were a little bigger. The 20mm inlet port is a strange stub arrangement which also looked standard and not ‘messed about with’.

I had to keep confirming to myself that the gearbox definitely was four-speed – yes it was, and I kept looking in Mick Walker’s book to check I hadn’t missed a page on this model – no I hadn’t! The only person I could think of who might shed some light on this was Bob Wright, but alas he was as mystified as I was! I tried the Gilera Web Ring, but still no luck. In fact I’ve spent hours on the internet scouring all the sites I could find and emailing anyone I thought might help but have still drawn a blank.

OK, anyone got any ideas please? I’d be delighted to learn anything I can about this model, so if you have any information, please let me know.

Next time I really will tell you about the Marzocchi fork saga, I promise!