Buying a ratty classic bike unseen is always risky but – hey – nothing ventured… Russ Gannicott starts a new project and asks; ‘Can you tell what it is yet?’

Of all my eBay purchases this could have been the one where I came unstuck big-time. Scanning through the ‘newly listed‘ section of ‘other motorcycles’ (as I do each evening, hoping for a MV four with a ‘buy it now’ price of two hundred quid), I spotted an advert for a ‘125cc Gilera, early 1960s’.

My interest was quickly aroused by the description and as there was no picture I promptly emailed the seller for further details. Past experience has taught me that adverts with poor quality, or no pictures at all, can be a way to secure a real bargain as many potential buyers are put off and the bidding is therefore low. The emails I got back gave me a number of clues as to what the model could be and the frankness of the seller’s description gave me the confidence to put in a rather low bid to ‘get my foot in the door’.

I was tied up with work on the day the auction ended and was surprised to find that mine had been the only, and winning, bid. Luckily the bike was only about forty miles up the road, so a couple of days later off I went with a small wad of cash and my fingers crossed.

Arriving at the seller’s address I was confronted by a bit of a mystery. The bike was in the condition described, but a lot older and a totally unknown model to me… what had I bought? It had 19″ flanged alloy wheels, an engine that looked like a two-stroke and final drive on the left hand side.

Once home, a quick check of the motor showed it to be a parallel valve 150cc unit… good news! Further investigation eventually confirmed that what I’d bought was a 1954 153cc Rossa.

The condition of the bike was, well, let’s call it ‘tired’. Some bits had been replaced with hand-made items, extra bits had been welded onto the frame, lots of bits were missing, and pretty well everything appeared to have been brush painted with red Smoothrite… nice! 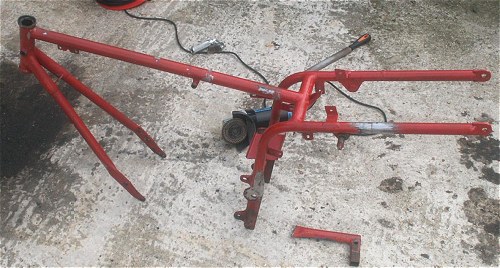 But fear not dear reader, I had a cunning plan. In the knowledge that a full original restoration would be almost impossible and to say the least extremely costly, I decided to store some original items that I wouldn’t be needing and replace them with components I already had and turn the bike into a replica of the Gileras that campaigned in the Moto Giro D’Italia first time round.

The most major item to be replaced were the forks, which were very bendy 25mm units and which would be replaced with a pair of 31.5 Marzocchis from an Aermacchi. Everything else would be cosmetic, but it still amounted to a pretty major project.

Whenever I get involved in a build like this, I try and run a number of jobs simultaneously. This avoids all those unexpected hold-ups which inevitably occur and allow you to progress with something at least!

With the engine out and the frame stripped, I set about identifying my priorities. The tank and tool boxes could be prepped and painted, the wheels stripped and the frame repaired and re-welded whilst I worked my way through this season’s bike jumbles trying to source parts. 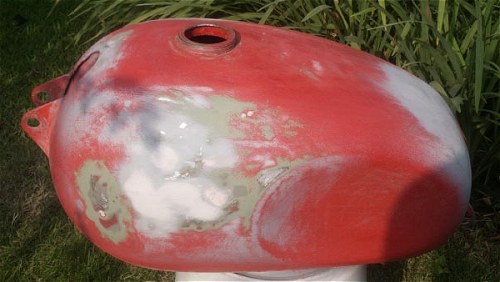 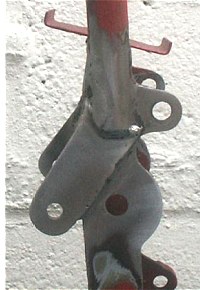 So it began. Prepping the tank was pretty straightforward, with only a couple of dents to get rid of, but the frame was another matter.

Someone had chopped off the pillion footrest hangers and replaced them with a couple of welded on lengths of one-inch gas pipe. Also, the seat rails had been lengthened at some time to allow for a BSA mudguard to be fitted!

Chopping off the footrest hangers was not a problem, but did show up a failing in the welds to the swinging arm gussets on both sides of the frame. As I was going to fit rear-sets, I decided to brace these joints with 4mm steel plate which would double-up as the new footrest mountings.

After carrying out this job, and the remedial work 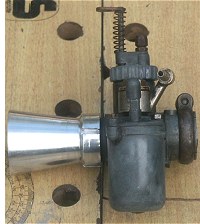 to the seat rails, the bare metal was liberally coated with Smoothrite to keep rust at bay until I got the frame blasted and powder-coated.

Meantime, the jumbles had come up trumps with a variety of much needed parts. I found all the bits I needed to rebuild the rather ancient Dell’Orto carb, a pair of tyres (2.5″ and 3″ x 19″), and a complete chrome headlight assembly to fit to the

One of the biggest problems I had to face was sourcing a kick-start.

The Gilera has a right-hand kick-start and the original lever was made of aluminium with a 15mm spline. Needless to say the splines strip as soon as you look at them! Salvation came in the form of a left hand folding Ducati lever which was not only the right fit, but also the right shape to avoid the rear-sets. The fact that it folded the wrong way was a bit of a problem, but one that was easily solved with the mig welder! OK, it doesn’t fold, but neither did the Gilera one…

Next time; How not to convert Marzocchi forks to external springs. and why do I have the ‘un-replaceable’ rear shocks?