Not all verbal exchanges need to be disagreements. Frank Westworth has been talking with other riders and wonders whether they’re as friendly as they used to be…

‘Bikers are not what they used to be,’ he said.

I smiled, nervously. What did he actually mean by this?

‘Sunshine Outlaws, Race Heroes and owners of aged over-hyped tat without fail blank me on my rare forays to “biker hangouts” these days.’

My friend continued in this vein for some time. I don’t mind this. Letting off a little steam in the company of your pals is always permissible. Just so long as he didn’t start insulting Norton riders. He didn’t. I attempted in a vague way to provoke him a little by remarking that I’d met as many good guys riding … draws breath … Harley-Ds as I have riding … draws another breath … rotary Nortons. Or indeed Hondas. My friend of course rides a Honda. He rides it a lot and indeed everywhere. He owneth not a motor car. He is a brave chap. If I did not also own a motor car, how on earth could I carry the spares my ancient clunkers demand at odd times? Not everything is available online.

He went away in the end, no doubt delighted that I’d put up no argument, which means that he had won it. The argument I mean. Not that we’d had one. But I did fall to wondering whether he was right.

Are our fellow two-wheeled pilots not what we were?

His argument was basically that we’re unfriendly to other riders who don’t ride our kind of bike – whatever that may be.

I thought about this. Thinking is a great luxury, especially when you’re supposed to be doing something else.

A chap in a Land Rover towing a modern trials bike was at the next pump. ‘You OK in the floods?’ he asked. ‘There’s room on the trailer for yours if you want?’

Earlier that same day I’d been sitting in the most northerly OK Diner chatting with the rider of a splendid Brough Superior. We were in fact talking mostly about books and about music, but as we watched the rain lashing both of our bikes (and several others) in the car park, I reminded him that B-S riders famously never ride their bikes, and wondered where he’d hidden the trailer? Nice guy; never spoken to him before, but an instant friend, as is often the case.

He squeezed another half-pint of water from his gloves and we chuckled together at how folk generalise about these things.

The day before this, at another inevitable OK Diner, the rider of an almost brand new and astounding Moto Guzzi Norge had attempted to persuade me to take it for a ride. I was utterly intimidated by the thing so I pretended to be utterly intimidated to avoid dropping it in front of him in the car park. All around us other riders were chatting about their bikes, which ranged from the restored and immaculate, via the entirely unrestored and completely scruffy, to a couple of ridiculously high-mileage BMWs and a couple of well-ridden Japanese Harley clones. No actual Harleys, which is unusual. But everyone did appear to be getting on famously well. Banter flew, as banter does, and riders tried each other’s bikes for size. I even saw a man with an Enfield chatting amiably with the rider of an MZ. Remarkable. 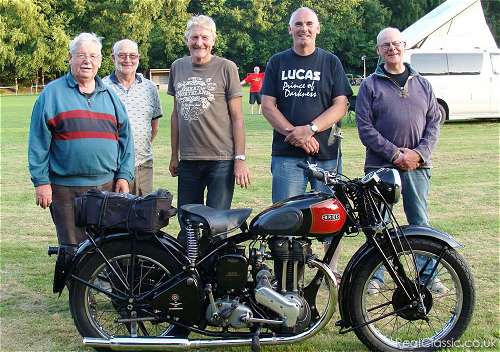 After this, a chap could have been forgiven for thinking that all riders are salt of the earth types and all get along completely famously.

Heading home to the sanctuary of sanity which is Cornwall, I was sailing happily around Shrewsbury’s A5 by-pass, crossed a multi-lane roundabout and became aware of a great roaring and screaming from behind. I glanced at the mirror. A man in a MINI had attempted to out-accelerate the Norton out of the roundabout, shifting lanes so he could get past. Even a worn-out old Norton accelerates a lot better than a MINI, so I’d not really taken note of him. Unlike the rider of a tricked-out streetfighter, bright colours, skinny girl clamped to the rider’s back and a louder exhaust than you’d hear on a race track these days. He attempted to overtake both the MINI and me, and, baulked, proceeded to scream and bellow abuse at the driver, all the while making more noise than a GP racer. I pulled over to give him the room he plainly felt he needed, to be rewarded by a shaken fist, more exhaust histrionics before he returned to his chosen task of trying to force the car off the road.

I think my friend, the one who thinks that bikers aren’t what they used to be, is wrong. Most motorcyclists are good guys, always have been, always will be. But idiots have always been idiots, and ever more shall be so.