Kicking over classic bikes might be part of the ‘charm’ but not everyone appreciates all the fuss. Steve Hodgson went in search of an electric leg for his single-cylinder Guzzi…

It all started when my recently acquired Moto Guzzi Nuovo Falcone 500 Military and I decided to go on its maiden voyage to Elvington with the Teeside Yesteryear Motor Club (www.tymc.org.uk). I had ridden the Falcone around the block on the Saturday evening and nowt dropped off — so it was Elvington, here I come.

My next-door neighbour and TYMC member Terry Walton volunteered to lead the way in his Rover, so off we went. The Guzzi was running a bit rough on tickover but with the wick turned up a bit it plodded on without much bother. No problems getting down to Elvington, except for a 60mph right angle turn, when the Rover decided to leave the dual carriageway, just as I had encouraged the Guzzi to overtake a car at 65mph!

Up to the gate at Elvington, pull over to pay. Stop the engine. Pay my money. Oh heck! (I am polite). The kickstart is on the left; all the other controls are on the right. So unless you have arms like a gibbon (and don’t have a dodgy right knee) it is difficult to kick over the Guzzi (even though it will start very easily) without putting it on the stand.

We have all been there, full gear on, first kick, wry smile, second kick, wrinkled brow, third kick, sweat.

Before the fourth kick, look around for sympathy and help.

Terry and his lad took pity, and uttered those immortal words; ‘Do you want a push?’ It was a bit like a strong-man event, chuff, chuff, chuff – no bang! (Except perhaps the pushers were on the brink of collapse!). I noticed the ‘air lever’ on the right hand side of the handlebar. In desperation I pulled it back and the Guzzi burst into life immediately, leaving my breathless and no doubt grateful pushers relieved as the Guzzi chugged away.

(I have since realised that the ‘air lever’ is really an ‘increase fuel’ lever).

Still, the Nuovo Falcone starts very well from the kickstart. Once you get the big outside flywheel spinning it’s dead easy – it just works.

So why do I have a problem?

The first three teeth on the kickstart quadrant are missing, hence only 90 of travel are available and that is from the horizontal to the vertical. (Anyone who has kicked off a big single does not want to have his foot ‘at the vertical’ when it kicks back). On the stand and all things equal, it is no problem, but at the gate at Elvington…?

I came back to riding some ten years ago, and all my bikes (except my Norman two-stroke) have had electric start – a great facility, if you stall it, stab the button and you are away. My previous bike the Cali III, use to burst into life with a reassuring roar, giving the impression that I was in total control.

I convinced myself that my Nuovo Falcone would be a much improved bike with an electric start.

The Nuovo Falcone Military was produced between 1967 and 1974-ish and the civilian version a couple of years longer. They are quite rare in the UK but nevertheless attract people like me to own them. I discovered that the civilian version had an optional extra of an electric start – this I knew from information gained from the Moto Guzzi Club (www.motoguzziclub.co.uk).

The problem was that I had no idea how the electric starting was done on this Guzzi. All my other Guzzis had conventional starter motors just like a car, and if this system was used then I could foresee a few mechanical changes, but information was not easy to find. I found out that the unit used was called a Dynostart unit, made by Bosch and simply replaced the existing dynamo on the bike? Eh?

Bosch was just not interested in giving out old information, which apparently had been archived. It seemed that a vee-belt drives the dynamo on the Falcone from the outside flywheel; a Ford Fiesta fan belt will do the job.

I rang Stuart at North Leicester Motorcycles, the importer, and received comments with the words ‘rare as hen’s teeth’, but he did outline the basic workings. Armed with this information, I emailed Agostini Duilio in Italy, asking them if they had one. They replied some three weeks later and advised that they had found one for £300 plus P&P and with the control gear on top. Gulp!

I thanked them but decided to try for an alternative. Surely a company such as Bosch must have provided these units for other machines?

After many hours on the Internet and many phone calls I was given a lead by a Bubblecar website, which mentioned Dynostarts in their spares lists. I rang the owner and after a number of emails was advised that some invalid cars might have had dynostarts similar to the ones I wanted.

I live in Darlington. I remembered that a company which operated in the street where I was brought up used to service invalid cars. It was still operating, so off I went to ask if they had any information on dynostart units.

The familiar blue invalid cars have been withdrawn from service and are now illegal to use on the road. The later versions were powered by a Steyr Puch 650cc horizontal twin and — lo and behold — were started via a Bosch Dynostart. (It also turns out that the last Fiat 500s also had this engine – hence the connection with Italy).

They produced a starter unit from their stores – bingo! I could see instantly how it would fit the Guzzi. The unit proved to be dimensionally identical to the unit used by Guzzi except there were no mounting lugs to attach it to the bike.

To fit the invalid carriage unit to the Guzzi required fitting mounting brackets, which took the form of mounting straps, and I made these in my workshop using a jig based on the dimensions of the original Guzzi dynamo. 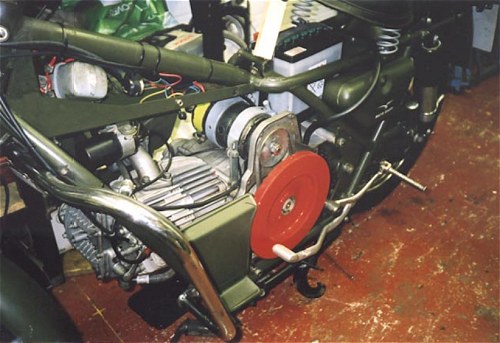 Add a few wires, a Mini starter solenoid, which I have housed in one of the tool boxes, handlebar push button and bingo!

I have an electric start Nuovo Falcone! 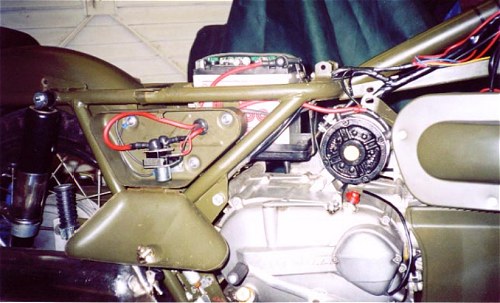 For the ‘electrophobes’ the existing wiring loom is not disturbed and the existing dynamo connections are reconnected to similar terminals on the dynostart unit.

Only the simple wiring needed to operate the starter circuit is added. Although the rating of the dynostart generator is 20A as opposed to the 11A of the original dynamo, the original regulator unit seems OK.

The original battery is more than man enough and is kept charged up satisfactorily.

In action, the dynostarter doesn’t cause much of a stir. It is driven by that vee belt, so there is no mechanical clatter when operated. Depending on how you want to do it, it sounds more like a spin dryer, followed by the bike starting up at a very slow tickover. I’ve been known to lift the valve lifter and jab the start button and then walk away as the bike starts up – Guzzi don’t do things like other folk!