Every inch of Russ Gannicott’s 250cc Enfield racer has been tweaked and tightened or gas-flowed and lightened. Time to give it a try, then…

With the bike finally built we got permission to do our testing at Hurn Airport, and on a sunny February day the Super 5 first burst into life. On first push, I might add! After strobing the timing we were able to do some long runs and take some plug chops. Result? Too weak. Up the main jet, try again. Again too weak. And again, and again and again. We were staggered to find that we had to go up to a 250 main jet to get a decent burn!

At the end of the runs we kept pushing a little harder and by the time we’d run out of perimeter track I’d seen 9500rpm on the tacho, and the revs were still climbing – not bad for running in! The thing with race engines is that when you build them you do it with the knowledge that their running-in period will be either the morning’s practice, or the first lap. With this in mind, you tend to run a bigger piston to barrel clearance than on a road engine, along with the kind of piston ring gap that you’d normally consider to be ‘worn’.

Being based on the South Coast is a bit of a handicap if you want to go classic racing. We’ve got no local circuits that cater for historic bikes and all of our nearest meetings are run at club level. By building the Super 5 to the same specifications that were used in the Sixties, we had bizarrely gone outside of the regulations stipulated by the CRMC, mainly in regard of our wheel and tyre sizes, so club meetings it had to be.

The North Gloucester Motorcycle Club held regular meetings on airfield circuits and included two mixed class classic races at each event, so we started a long and happy relationship with this excellent organisation.

Pre-season practice at Keevil went well despite being the less than ideal circuit for a small classic, and we got a top six placing at our first meeting at Pembrey. The rest of the first season saw us racing at Hullavington, Fairford, Colerne, Keevil and Ty-Croes on Anglesey. The biggest difference between airfield circuits and more regular, purpose-built tracks is that they tend to favour big bikes and can be real engine killers. Generally the airfields are three long straights, three corners and a chicane. Any gain you might have with handling or rider skills are totally lost when pitted against brute force and power, so our little Enfield was always going to be a rank outsider at these meetings! 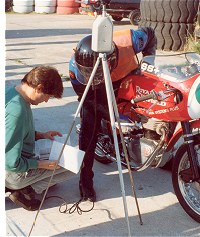 However, the bike often surprised both us and the spectators, as having screamed its way up to 9500rpm on the straights, the leading link forks with their inherent anti-dive allowed for very late braking and high corner speeds.

On more than one occasion a Rob North Trident pilot was staggered to be passed on the outside of a bend by the little red Enfield!

On a technical note, as mentioned the leading links proved to be worth their weight in gold. Not only do they have a primitive form of anti-dive, which is useful on a small bike which doesn’t allow for much rider weight transfer, they are also very rigid.

In fact they are so rigid that they would tend to punish the headstock races and quite often we’d have to take up some slack in the headraces half way through a meeting despite having set them before morning practice.

The gear ratios worked as well as we could have hoped and the only changes we would make would be with the gearbox sprocket for either airfield or twisty style circuits.

We finally settled on a 9.5:1 compression ratio to allow for some very advanced ignition timing which we achieved through running a 75/25 unleaded/avgas fuel mix.

On more than one occasion the needle on the Scitsu shot passed the 10,000rpm mark with no valve bounce or structural damage, but for our own peace of mind we imposed a limit of 9500rpm.

In testimony to this decision and the durability of the Enfield design, the bottom end held together for two and a half seasons of full-bore racing. Quite some achievement for white metal shells and an alloy rod. When it did finally go, it did so gracefully, with just a little knocking to give you enough warning of impending disaster.

The oil pump took its punishment in its stride and always produced the high pressure it was famed for. Yes, the same high pressure that Enfields were criticised for – ‘Leaky Oilfields’ etc. They leaked oil, yes, but most often as a result of the very high oil pressure finding a weak spot – where someone had used a blunt screwdriver to prise open a case, or lift the head for example.

They bike handled like a dream, the engine was sweet, the brakes worked and it was capable of a respectable turn of speed. In many ways, it proved to be far more than we could have hoped for. Sure, it wasn’t going to win anything, but that wasn’t our aim. Even with a mid-field placing you can get an awful lot of satisfaction when you take a look at the bikes that finished behind you, and in our case that often included some big singles and Triumph twins.

Our finest hour though was at New Brighton. The New Brighton road race was the only race on public roads on the mainland and consisted of around a mile and a half of sea wall, high kerbs and roundabouts! As an open meeting it attracted a huge entry and a field of twenty-seven bikes in the up to 250 class. At the rider briefing you were warned not to take the racing ‘too seriously’ (yeah, right!) as the circuit was inherently dangerous with no run-offs, just walls and spectators! 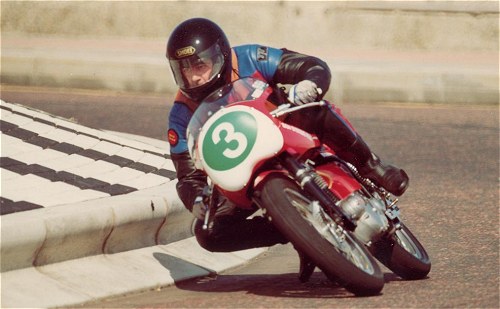 It was the kind of circuit our bike could have been built for – no long straights, lots of corners rather than bends and a couple of roundabouts. Stuart rode the bike with his usual surgical precision and in both races we were the first British bike to cross the line, being beaten by a couple of full race Ducatis, a Honda works replica and a Crooks Suzuki Super Six that was a veteran of the Manx GP.

Whilst a Duke took the honours in the first race, the Crooks Suzuki bagged the second with Stuart coming in fifth place just a few seconds behind the winner both times. The most astonishing thing was what we’d finished ahead of; several more Dukes, Hondas, Aermacchis and Suzukis, a couple of Conti GTs and some real exotica like a 250 Manx Norton and a very rare 250 (genuine) Gold Star clubmans racer.

Our first season of classic racing had been a great success and we were now confident that we could build a viable race bike. We had established good relationships with a number of specialists and had a list of reliable suppliers. We knew the sorts of circuit we were good on, and those we’d probably not return to. In short we were ready to move on to phase two; the two bike team! 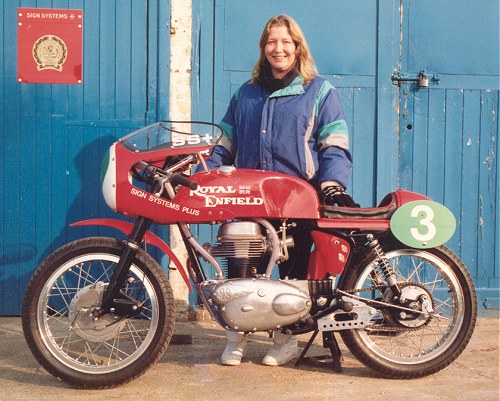