Russ Gannicott gets a yen to go classic racing, so finds himself an unusual 250cc Royal Enfield and starts prepping it for action…

I guess it all started when I was sixteen, riding my new FSIE back and forth across the New Forest to attend Brockenhurst sixth form college. Every morning at around the half way mark I’d be passed by a lad a year older than myself on a loud, red blur. Even when I’d reached seventeen and progressed onto a D3 Bantam, then a DT175 and finally a RD200 Yamaha, that red blur still passed me through the twisty bits dropping down into Brock. I can still remember the smell and gentle pinging sound of his bike cooling down in the car park when I arrived about ten minutes later.

It was then that I made the promise to myself that one day, despite the uncool and almost extinct British bike industry, I would own that icon of aggressive teen spirit – a Royal Enfield Continental GT. There was something about the GT that made it seem attainable – you could understand the engineering, it wasn’t the sort of bike your uncle would ride and it wasn’t Japanese, which meant it sounded good, went round corners and didn’t tie you into years of HP repayments. (And if you want to know more about the GT, there’s a full road test of one in RealClassic magazine, issue 11).

Needless to say, things like pubs, girlfriends and a car license got in the way and the dream was put on the back-boiler for nearly twenty years.

In 1990 I’d just established my own business and was actively supporting a colleague who was racing a TZ250 Yamaha at the time. The bike was quick, but prone to blowing crankcase seals, so I suggested we look at the idea of campaigning a classic racer instead. Stuart, the Yamaha owner, was already a British bike fanatic with a collection of fabulous machines ranging from a Norton 88SS to a Velo Viper and various BSAs, so he was readily agreeable.

We decided to start at the bottom and campaign a 250, with the intention of progressing to a two bike team and eventually a move up in class to something bigger like a 500. We both believed that singles epitomised the spirit of classic racing, so a 250 Enfield seemed the logical starting point, as not only were they fairly quick, they handled well and parts were readily available.

Even in 1990, Conti GTs were fetching more money than I wanted to spend on the first donor bike, so I set about finding a suitable Crusader in the knowledge that I could easily take it up to GT spec. The bike I ended up with was a local 1961 Super 5, a model I wasn’t familiar with but which had all the benefits of the GT but without the price tag. I paid the chap the 400 pounds he was asking and we set about the task of turning it into a half-decent race bike. 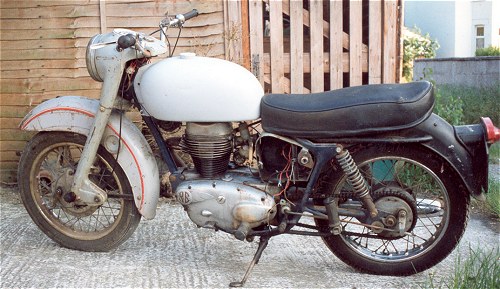 At this point I think I should explain our approach to the whole classic racing scene. We knew from the start that we’d never be really competitive but that didn’t matter. To us, the bikes and their preparation were always more important than the results we might achieve riding them. Sure, you don’t want to embarrass (or worse) endanger yourself or other riders by being so slow that you get treated like a mobile chicane, but neither did we want to win at any cost.

Had we wanted to be truly competitive then we would have had to meet a couple of criteria; you need to be light, your bike needs to be very light, and you need to run your engine on dope. Failing that you need to run either a Jap two-stroke or a bike that is already supported by a large aftermarket tuning industry. Sadly for us, the RE didn’t fit the above criteria and neither did we! The best we could hope for was a rideable bike that was reliable and prepared to the best of our ability, which conjured up what we saw as the spirit of the classic British racing four-stroke.

Chassis preparation was pretty straightforward with only one or two minor frame modifications needed to accept the GRP body work we were going to be using. The hunt for this bodywork led us to our first encounter with Allan Hitchcock who was able to source us a new Gander and Gray Gannet petrol tank. Allan was later to become the source of all our parts over the years and became and still is a good friend to us.

Along with the Gannet tank, we had a modified Aermacchi seat unit made and a Rickman front mudguard, which looked a little odd on the leading link forks, but did the job well. At first, we questioned if we should keep the leading links as neither of us had any experience of them, but research into 250 RE racers from the Sixties showed us that they were favoured by the riders of the day, along with what were unfashionably wide wheels and tyres. We settled on keeping the forks and got a pair of WM3 Akront rims laced onto the standard hubs by Central Wheel. Avon made some race intermediates for us, and the chassis was finished off by fitting a pair of Pat French rear-sets and Hagon shocks. 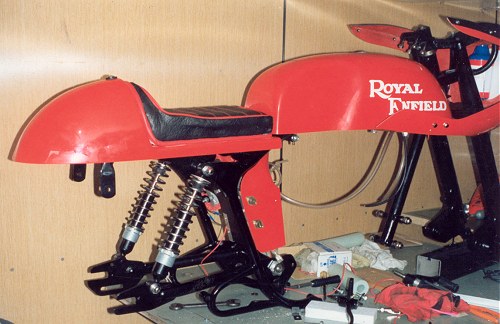 Having ridden a few 250 Crusaders, I knew the engines were rev hungry and decided that what we couldn’t gain in raw power, we’d have to make up for in revs.

The bottom end got a thorough rebuild with new shells and mains, the rod was polished and shot-peened and a new GT high compression piston was modified and generally cleaned up.

All the real work was going to have to go into the head to release all those revs I as looking for. We tracked down Ainsley Barwick, the renowned four-stroke tuner from Ringwood and gave him the outline of what we were looking for – along with a spare head to play with.

After a couple of hours on the flow bench, armed with a packet of plastecine, Ainsley had some suggestions for us. The standard valves were going to be big enough, if we could keep them open, to allow us to run a 32mm Mk1 concentric and the inlet port had enough metal around it to allow boring right down to the valve seat. 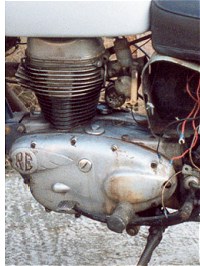 The guides would be shortened and the stems waisted to improve the flow. Skimming the bottom of the barrel and lapping the top to the head without a gasket would allow us the scope to push the compression over 10:1 if we needed to…

We were in business!

Whilst Ainsley got on with the head, we turned our attention to the rest of the engine. The oil pump had all its moving parts replaced and was ‘blue printed’ as was the points drive, primary and timing gear.

The standard GT cam had the hardening removed from below the lobes and was re-ground to provide a little more lift. Cam duration was increased by increasing the radius on the feet of the followers.

We knew the original cork clutch was going to prove to be a problem, so we set off in search of some alternative plates. Sureflex plates for a B25 were the same diameter and only needed the tabs machined down in size to fit the Enfield basket, but as they were thinner we found we could fit an extra plain steel plate in the clutch. This was handy as it meant that if you fitted it as a shim next to the thrust plate, then the heavy thrust plate could be drilled with lightening holes which should also help to disperse heat.

Electrics were going to be coil and battery total loss, so the alternator was scrapped, saving a few vital pounds of reciprocal weight. Other people’s dyno testing has shown that this can release about half a horsepower, which doesn’t sound much, but is quite a lot when you are starting off with only about eighteen on a good day! Our target was to break the 25bhp barrier…heady stuff! 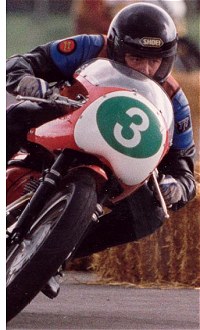 Next on the list was the gearbox. Needless to say, once again all the bushes and bearings were replaced. Ratios were going to be a problem as there were no alternatives available and we needed fairly low gearing to cope with the high revs we were aiming for. At least there was some choice regarding the gearbox sprocket, which was good – because the rear sprocket was cast-in and at this point we didn’t want to get into machining down the hub and having changeable sprockets made.

We finally opted for a four-speed box, not for any reason other than the ratios. By fitting the kick-start pinion from a five-speed to a four-speed box, you effectively close the top three gears up giving a bit of a jump from first to second, but from then on it would be a very close ratio box.