We feel that everyone should be told how Emm’s adventures with her Royal Enfield are progressing (even though we run the risk of becoming RealBullet.co.uk). This time, she gets in a bit of a flap…

Despite rabid heckling from the gallery for ‘Royal Enfield Bullet – the First Service’ and ‘Bullet 500cc – The Next 500 Miles’ to appear here, I would like to think that a detailed account of a bike’s routine first service would prompt a chorus of yawns and then be drowned out by the frantic double-clicking of mice in an attempt to find something more worthy of reading. Wouldn’t be the first time that I’ve been shown lacking in perception though.

As an introduction to the Thought for the Day however, and for those of you with an inane fascination for the technical doo-dahs, the dealership did accomplish a little more than routinely disassemble Enfield innards and change Mr Castrol’s finest during the first check-up. They also exchanged one, 17-petalled, sunflower-shaped, thick disc thingy for another 18-petalled, sunflower-shaped, thick disc thingy – someone technical can correct me here, but I believe it’s called a sprocket.

The net effect of this up-rating for the Bullet is less of a Black and Decker strimmer sound at 45mph and more of a smooth, torquey sit-on-and-ride lawnmower effect at 55mph. And, having made this minor modification to the otherwise standard set-up, I left the dealership thinking that there was every chance that I could throw away the tow rope for good and start to keep up with traffic — or possibly even overtake something? It’s a challenge, having so much misplaced faith in something so unlikely. It makes life worth living.

So, with the minimally increased potential for speed and the chance to push running-in tolerances just a little further over the next few hundred miles, I opened her up and began to enjoy the sweeping bends and long straights of Cambridgeshire countryside. Picture the scene – HGVs buffeting me in their slipstreams, commuter traffic insistent on polishing my right knee and large, photogenic, Japanese bikes whooshing past at an extraordinary number of miles per hour. I’d adopted the classic, RealClassic, posture – head down, elbows tucked in, cheeks puckering out with the G-Force of 30mph head-winds, and knees gripping the tank with more pounds per square inch than a stubborn baked bean on the bottom of a baked bean tin.

Anyone who followed me to or from the Stinkwheel will know that I make up for actual speed with interesting gearbox noises and a big grin — marvellous stuff. But now, all I needed to make my day was something of an amateur challenge to carry out my first official overtaking manoeuvre. I had a little bit more of the power I needed and in the bottom (sic) of my new leather trousers I’d found a small amount of confidence. I started looking for something slow moving and meaty, like a combine harvester, or possibly a dead hedgehog.

Nothing. Nothing on the A-roads, nothing on the B-roads. Everyone and his caravan in a hurry to get past me on their way home and road-kill was conspicuous by its absence. But then, coming down into one of the villages haphazardly glued to either side of the Ermine Way – I saw my chance. Up ahead in the distance, I saw a shimmering light. No, my head didn’t grow heavy, and my sight didn’t grow dim, but I had seen a small push-bike. Perfect. I had at least 300 yards to sort out a different gear; any one of the 30 between false neutrals in the gearbox would do, as long as it made a good growling sound – the blip of throttle and rumble of a big single in this first manoeuvre were going to be crucial to the overall effect. Downhill, wind behind me, with only traffic islands and lamp-posts to witness the historic occasion. Good job really, now I think about it.

Have you ever been overtaken by something when you least expect it? Often, it’s another one of those large air filters disguised as a V-Twin, sometimes it’s a BMW purring past within an inch of your mirrors and usually I keep a check on what’s going on behind me – using the paint-by-numbers technique. This simple but effective trick has helped me out a couple of times; you glance at your mirror and register colours — blue, red and black. Then, if you look again and see just red and black, you know that Mr Blue has either pulled over, pulled off or is about to pull a fast one and appear in your blind spot. This is your cue to move sharply over to the left hand side of whatever road is left, and hope that nothing appears in front of you for the next 200 yards while Mr Blue makes his move.

I was coming up fast — 38 in a 40 zone — on the pushbike. The pushbike had heard me coming; I could tell by the nearside lean and fervent backward glance. Dropping down into neutral (predictably) was not a problem; stomping her back up into fourth and I knew she’d still pull magnificently-ish past … I checked my mirror – no colours there… I put my indicator on… I pulled out… and nearly decapitated a pigeon that was overtaking me on the offside.

Now, I have had my encounters with wildlife of varying sizes while driving on the Queen’s Highway. Muntjak deer with a death-wish have been seen dangling from the underside of my otherwise shiny, red Golf. Rabbits with suicidal tendencies have been seen careering for the hedgerows as I hammer along on my way to work and various species of bug have met their messy end mainly due to a habit of nodding to their mates going the other way and not seeing my helmet in their flight path. 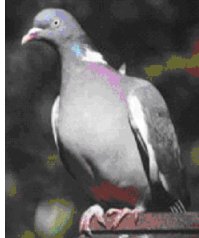 But on a scale of one to ten, being overtaken by a pigeon ranks pretty highly for both embarrassment and wobble-factor. Even on an Enfield. Arguably, the pigeon’s defence will state that it was not taking off on a parallel runway, it was merely rotating through a tandem trajectory and launching itself past me at a great rate of knots. My prosecution however will return to the evidence that presented itself out of the corner of my eye – a flapping bundle of grey feathers, whop-whop-whopping its wings madly in a blatant attempt to thwart my attempt on the land speed overtaking record.

Then I remembered: extra petals on the sunflower-shaped thingy down below. Did I really have enough ‘extra’ to try again and slip her down into third? Quick look down, 38mph — you betcha. I apologise to the rather shapely young wench on the push-bike for what happened next and I’d better do some grovelling to Haywards when I take the bike back for its next service. Believe it or not, I hit third gear spot on with a precision hoike of the Size 7s … The pigeon (head tucked down and squinting for the racing line if you ask me — trying to get out of the way if you ask its lawyer) flapped across the front of my bike and pulled a vertical loop right in front of me. Third gear pulling her up to the ‘well over the hill’ side of 40 – sounding like Foggy on a clear track day and — whoop! — slalom round the pigeon and neatly miss the front mudguard of the pushbike a clear five yards ahead of the challenger.

Yessss… she wheelies across the line…. the crowd goes mad…!

Back to reality as I continued on my merry way leaving pushbike and pigeon mayhem behind me. The official embarrassment factor at a pigeon trying to overtake me? That has to be at least a nine out of ten. The points for satisfaction at seeing the pigeon tumble frantically through the air in the direction of a hawthorn hedge as I check in my mirrors once I’m past? No doubt about it — must be an eleven and a half.

Douglas Adams once said, the art of flying is to throw yourself at the ground and miss. Today I proved that the art of staying ahead in life is riding just three mph faster than whatever’s trying to overtake you. Even if it is a pigeon and you’re on a 500cc Royal Enfield.

Oh well, bring on the next challenge – I’m ready for the next 500 miles! 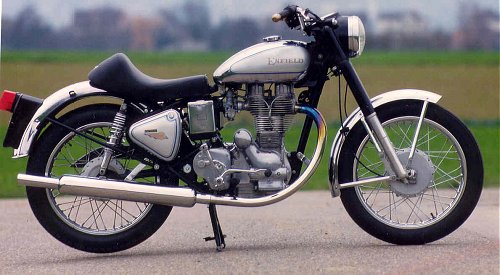