Why do so many of us apparently need to categorise everything? Frank Westworth is bemused by the notion of an emerging classic…

When you become a student of the biological sciences, as I once was, one of the very first thing your lecturers beat into your dense student heads is the importance of classification. If you are ever to make your own way in the soggy world of the botanist, for example, you truly do need to have a firm grip on the differences between the endless species and to recognise and understand the distinction between, say saprophytes and parasites, thinking journalistically for a moment.

But it does all get a little dull. Lists are just lists, whether they do in fact help you to tell the difference between Fucus Vesiculosus and Apis Mellifica, and, in our own case in the equally strange world of the ancient motorcycle, between an R1150 GS and a DBD34 GS. If not for the diligent efforts and selfless obsessions of the self-appointed classification expert, how would you be able to discern these vital distinctions?

This slightly irritable train of thought was shunted from the buffers by reading an email from an acquaintance in which he was asking my advice about whether he should buy a bike – I’ll avoid disclosing which bike; the guilty need protection too – because he felt that it would become an ’emerging classic’. Ignoring for a moment why anyone would seek my advice – apart from possibly ensuring that they did the exact opposite of my suggestion, thus ensuring a lifetime of success and adoration – what on earth is one of those; an ’emerging classic’, and how could a bike become one? I can see how a bike might find itself sufficiently honoured by the classification as a classic, but an emerging classic? Emerging from what? A cocoon? The outer darkness? The Conservative Party?

Very occasionally, I think I come vaguely close to understanding what a classic is, be it a classic bike, a classic boat or a classic bassoon. A classic is something which has a price way above its value. And traders make their meagre, selfless living by recognising that there are a lot of folk whose perceptions of these are very different. You, I trust, would consider a Triumph T160 Trident to be a gloriously engineered pinnacle; some kind of ultimate expression of the glory that was British bike-builderdom in 1975. I, being a cad and a prime example of know-nothing beardy scum, might consider the same bike to be a catastrophic money pit suitable only for standing in a living room and admiring, or for weeping over when it starts blowing acrid dense smoke signals from its shiny cylindrical silencers. Again. Which it surely will, at least if my own tear-soaked experience of them is typical. 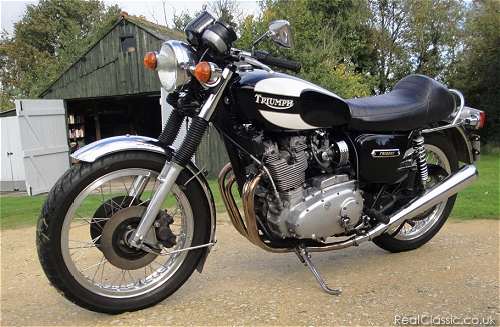 Time was, all Tridents were considered to be fairly disastrous as riders’ machines and the vast majority of Triumph riders rode twins. Until, presumably, there was an emergence. One dark day, as if by magic, three-pot Triumphs were quite suddenly viewed by Men Who Know These Things (and they are indeed mainly men) as classics. They had emerged. How utterly batty. They hadn’t changed. They’re still heroic failures in the Great British tradition; the difference now was that all those (like me, as it happens) who had a doggy T150 leaning against a wall, a wall it had leaned against for five years because it was so not worth repairing because it was unsaleable … quite suddenly they could clear the horror out of their lives in exchange for enough money to buy a sensible Honda.

A Note, in case the dedicated stalwarts of the TR3OC come after me with an axe; I actually went the other way about a month later, and swapped my CB750 for another T150. Phew. That latter deal was because it was still possible to buy a scruffy non-running T150 for very little, but because of The Great Classic Emergence it was worth fixing it. Which indeed I did. Unlike the T160 which followed.

My on-going bewilderment is that the bikes themselves, be they T160s or R1150R Rocksters, hadn’t changed. Folk’s views of them had. As in fact, quite recently and very suddenly, has my own. It’s like this. Back in the mid-1990s I rode a lot of the current versions of BMW’s oil-head boxer twins. They were (mostly) great. But, well, although the Better Third owned two of them, I somehow never did. I like … I like classic bikes, and soldiered on with my fractious rotary Nortons. And I always thought the Rockster looked … odd. 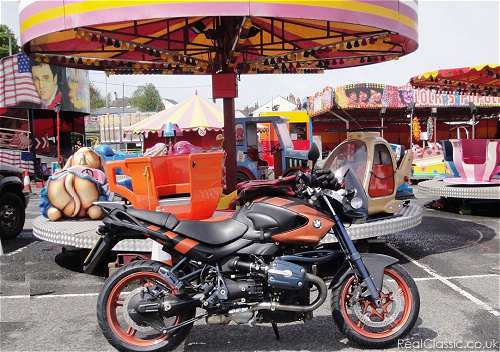 And then, no idea why or how, I have found myself the bewildered owner of a BMW Rockster. Why? Several pals asked me this. Simple, I tell them. It’s an emerging classic. I nod sagely. They nod, knowingly. We all go ‘Aahhh… That’s OK then.’

If you are overwhelmed with an inexplicable urge to find out more about Frank’s BMW Rockster, it makes a guest appearance in the …