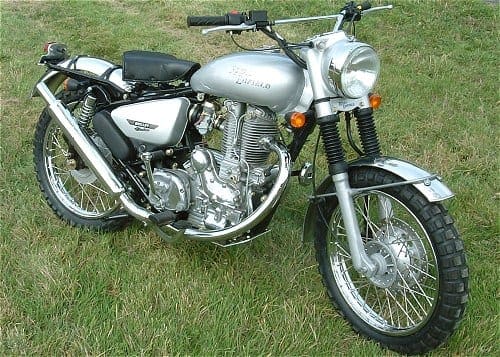 Big wide bars? Chunky tyres? Single seat? Someone at Royal Enfield is going the distance to tempt her into buying a new Electra, reckons Rowena Hoseason. But she’s more likely to get a T-shirt for Christmas…

The guys at Watsonian reckon that they’ve created the Trials Electra to reflect Enfield’s historic ISDT successes in the 1950s, aiming ‘to capture the spirit of the unstoppable Bullet in a package that will be comfortable to ride on today’s roads’. I reckon they’re just trying to make life hard for me. I can resist everything but temptation, after all.

And the Electra-T is a mightily tempting package. It’s based around the lean-burn engined, Electra-X model – the bikes which Emm and I took for a 3000-mile sprint this summer. The Bullet Electra 500-T shares the frame and running gear with the Electra-X road bike, as well as the 499cc OHV all-aluminium one-lung lump, plus that handy electric start (didn’t let us down once), 5-speed gearbox (prefer it to the trad 4-speed box but it can still be a bit fiddly), 280mm single caliper front disc brake (a vast improvement over the standard drum – although you can improve the performance of the drum with the application of skill and patience), and gas-filled rear dampers (which survived carrying a hundredweight of what turned out to be largely superfluous luggage. Ah well. Better safe than stranded without a kitchen sink…).

What the Electra-T gains is in the style department. It comes in any colour you like, so long as it’s silver. The colour-matched mudguards are gone, replaced by trim alloy items. You now grasp a set of scrambles handlebars and perch on a solo sprung saddle, while the back end of the bike has been given a revised rear sub-frame and tail light assembly. I must admit that these aren’t the neatest fittings I’ve ever seen, and the tail light in particular looks vulnerable to impact – I’ve a habit of kicking things like that when hopping on and off… But the alloy bash-plate, titchy indicators and upswept sports silencer look like just the job. 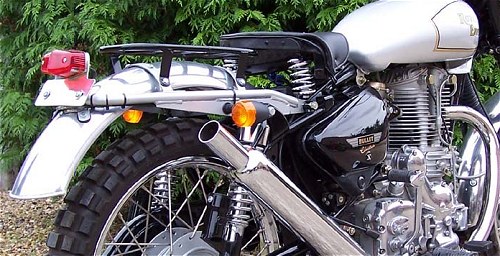 The exhaust system prompted me to make a quick call to the UK Royal Enfield importer, Watsonian Squire. That’s because the bikes which we rode were equipped with Watsonian’s Highway Kit which boosts power by 6bhp and gives them better acceleration and a healthy chunk of midrange whomp, right where you need it, accompanied by a delightful exhaust note. The kit is quite complex – it includes replacement carb, silencer, manifold, air filter and fixings – so I wasn’t sure if it could be adapted to the new Electra-T.

‘Hang on a minute’ said the man at Watsonian. He also wasn’t sure. It all went quiet for a while. Then: ‘we can’t see any reason why not!’ he announced, cheerily. So for 300 notes extra you could conceivably turn the T into a TT… and it’s a change I’d want to make, simply to boost the bike’s fun factor. The real challenge would be retaining the T’s funky kicked-up silencer – it would be a shame to lose that in exchange for the extra oomph. 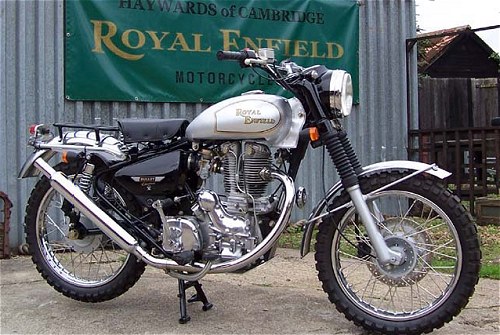 Another change I’d probably make would be the tyre choice. The Continental TKC 80 Rally tyres certainly look the biz, and Watsonian say they ‘offer high levels of grip when used on or off-road plus long service life.’ All the same, they look a touch too butch for my kind of tarmac riding – I’d go for something with a slightly milder profile which will suit wet roads as well as muddy lanes (we like Michelin Sirac in this household). 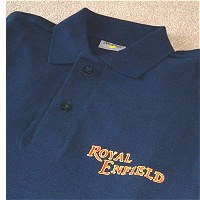 Not that I’m too likely to discover an Electra-T lurking in my Christmas stocking, more’s the pity. At a sniff under four grand, it’s £500 more expensive than the standard bike, and Christmas presents normally needs to cost a little bit less than that! However, official Royal Enfield polo shirts are now available and cost just £10. The navy blue shirts are made from high quality pure cotton, with the Royal Enfield logo embroidered on the left breast, and come in sizes L and XL. Cunningly, the shirts should also appeal to riders of older Enfields, as well as all the people who’ve bought modern Bullets.

Details about both shirts and motorbikes from Watsonian-Squire on 01386 700907 or www.royal-enfield.com. We snaffled a couple of the photos you see here from Royal Enfield’s UK Dealer of the Year, Haywards of Cambridge: www.haywards.co.uk

And if anyone out there has bought an Electra-T then drop us a line: we’d love to know what you think of it. 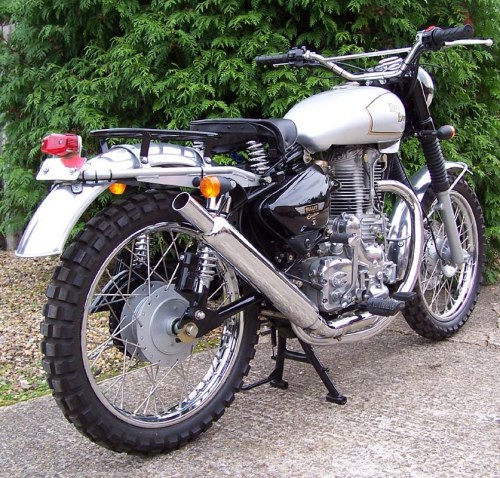