Karl Bentley investigates a misfire on his Yamaha XS650, and discovers that it’s all in the timing…

Coming back from a wonderful ride (you can read about it here), the ignition timing on my XS650 slipped due to a loose timing disc.

There are two main ways to check the timing on your bike. Static timing, where you work out where the points open in relation to the crank position, or dynamic timing which you check with a strobe against marked timing points with the engine running. This latter method is normally the one you use with electronic ignition setups and later points systems and is the one I will attempt to describe here.

To carry out dynamic timing with a strobe you will need timing marks. The first on a moving bit, like the alternator rotor, and another on a static bit like the crankcase. These are often provided by the manufacturers but on older models they are not. Fear not, as with a bit of paint you can make your own timing marks. I often did this with my older two strokes, like my old D14 Bantam, as it was a lot quicker and easier to whip the strobe out than set up the dial indicator or degree disc. Of course it takes a bit of working out with a degree disc or dial indicator first but I always thought it was worth the initial effort in the time saved later on.

On the XS650 the timing marks are on the alternator side. Make sure you follow the manual as sometimes there are marks for timing and others for checking valve clearances.

So the kit you need:- 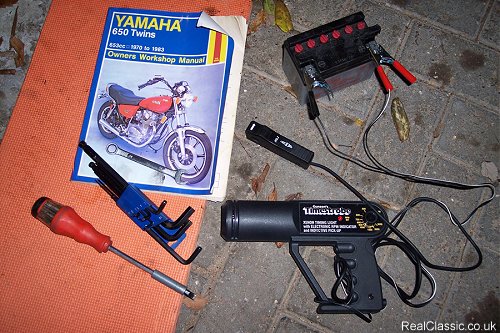 In the picture you can see the manual, tools, strobe, battery and something to kneel on. The strobe I use needs a 12volt supply hence the battery. I find it easier to use a separate battery though you can use the 12 volt one on your bike if fitted. Strobes come in all shapes and sizes and it’s best to buy the best you can afford.

The strobe clips around the first cylinder plug lead. Be careful not to drape the strobe wires near the exhaust pipes, yes, they will melt!

Firing up the bike the strobe will emit a bright light each time the cylinder fires. Pointing this at the bike timing marks, and not the neighbour’s dog, you will see the marks on the rotating bit line up with the marks on the static bit. If they don’t then you will have to move the timing. Have a look in the manual as there are a myriad ways of doing this. On the XS650 you undo the two screws and move the timing back plate. I do this with the engine off as with all the moving bits whirring around it would be easy to jab a screwdriver somewhere unexpected and expensive. Remember safety first. 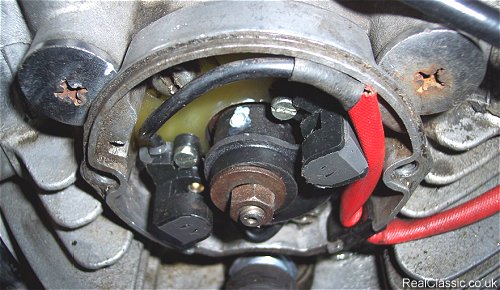 Karl’s XS650 is fitted with a Newtronic aftermarket electronic ignition system. The ignition is triggered by a beam of light being interrupted by a tab on a rotating disc. Note the grub screw (mentioned in the previous story) now locked in place with a blob of white sealant.

Now my advice would be to take your time and get it right but be aware the bike will not enjoy ticking over for too long and your neighbours might not be overjoyed listening to the mechanical mechophony*. So a job best done in the middle of the day not early in the morning or really late at night and definitely not a job to be done indoors as you will choke do death on the fumes, you have been warned! 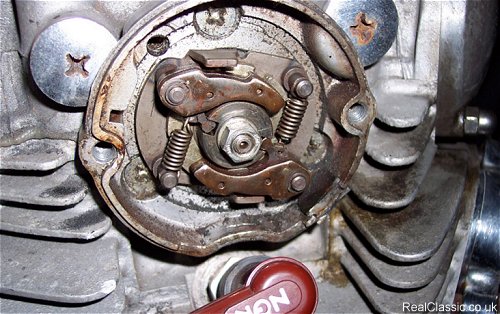 Once you have the timing checked, blip the throttle and make sure the advance works. This is mainly for four-strokes as older two-strokes tend to have fixed timing. XS650s have a tendency to wear out the springs in the advance mechanism and this is a good check to make sure all is working properly. Worn or faulty advance mechanisms will cause the timing to bounce around.

Finally, the factory marks are the best compromise and normally work well but some folk recommend retarding the timing slightly to stop pinking on older bikes with our modern petrol mixes. Let the debate on that begin…

*What a great word! Almost as good as ‘disgeographied’, which describes that nasty sensation that places may not be exactly where you expected them to be, although you certainly ain’t lost, oh no…