Over 100 vintage motorcycles will be ridden some 400 miles in two days this month, taking part in South Africa’s annual regularity rally. The classic bikes involved are all over 75 years old, and some of them have already celebrated a centenary. Roger Houghton reports…

An excellent entry of 136 riders has been received for the 2011 DJ Rally for classic motorcycles which will be staged in March between Durban and Johannesburg. Clerk of the Course Pierre Cronje, who is also chairman of the Classic Motorcycle Club, said he had hoped for at least 150 motorcycles on the start line in Durban, but the entry is still one of the best in recent years. Last year there were 124 entries and 117 starters for the 40th running of this commemorative event.

Hans Coertse (left) and Rory Nossiter rode the Humber Pedal Cycles in the 2010 event, but this year Coertse, on his 1909 model, will be accompanied by Stuart Anderson on the 1911 version that is celebrating its centenary this year.

All the motorcycles taking part in the run must have been made before 1937 so they would have been eligible for the last road race between Durban and Johannesburg, held in 1936. The first race had been staged in 1913 and in 1936 the authorities decreed that racing on public roads was too dangerous. The 2011 rally marks the 98th year since the first race took place.

In 1969 the late Dick Osborne, himself an avid motorcyclist, persuaded a group of fellow enthusiasts to organise a commemorative DJ Rally using the roads that made up the route of the original race. The first DJ commemorative rally took place in 1970 and it has been staged every year since then except for 1974 when the authorities refused permission due to the fuel shortage 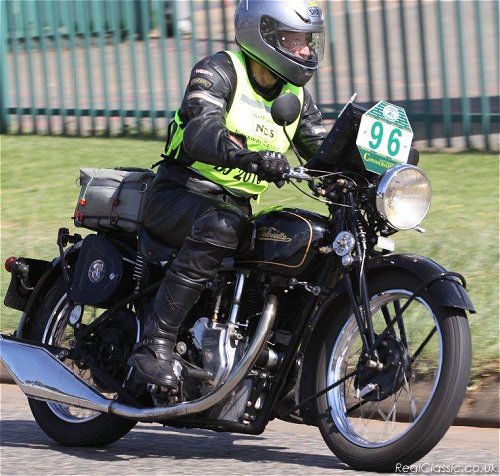 Last year’s winner, Kevin Robertson. Will again be mounted on his 1936 Velocette MSS as he defends his title.

The format of the event has changed from a ‘first past the winning post’ road race to a competitive regularity rally where riders have to try and ride as close as possible to set average speeds. Their performances are monitored by hidden marshals placed along the route who take the time as each competitor passes a check point.

Cronje and his organising team have been hard at work for several months already planning this premier event on the local classic motorcycle calendar.

‘The route for this year’s commemorative rally will be similar to the one used last year, with the start in Hillcrest and the finish at the James Hall Transport Museum in La Rochelle, Johannesburg,’ explained Cronje. ‘On the first day the riders will cover 350km from Durban to the traditional overnight stop in Newcastle and on the Saturday they will cover a further 320km on the way to the finish.

‘The oldest motorcycle entered is a 1909 500cc Humber Pedalcycle to be ridden by Hans Coertse. Stuart Anderson will ride a similar 1911 Humber, making it two machines in the field that are 100 years old. 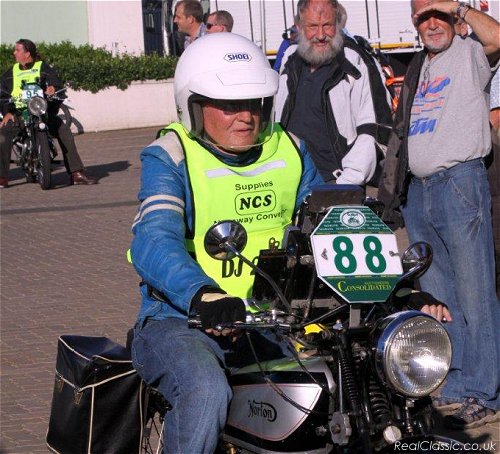 Oldest entrant is 89-year-old Stewart Cunninghame, who will ride a 1930 Norton International.

‘There will be a blend of youth and experience, as entrants include 89-year-old Stewart Cunninghame and local Superbike racing star Clinton Pienaar who rode a 1000cc Honda at last year’s Isle of Man TT races. Pienaar will ride an Ariel Red Hunter on his first DJ Rally where he will be up against Simon Fourie, who will again ride his 1935 BMW R12 750 and is a regular entrant on the DJ.

‘Cunninghame will have the competition number 100 on his 1930 Norton International as we were unable to allocate No. 89 to signify his age,’ explained Cronje. ‘Stewart Cunninghame’s son, Allan will be riding in the DJ Rally for the first time. He will be mounted on a 1935 Velocette 350.’ 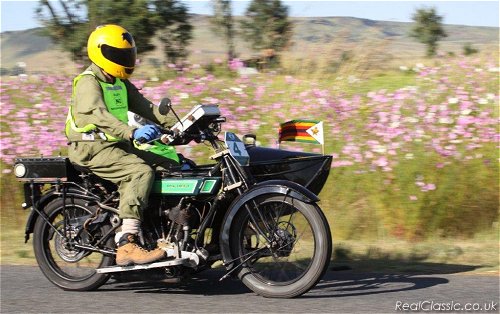 Peter Dahl , one of the oldest riders on the event, will again be mounted on his 1922 Royal Enfield combination. This year he will have Poekie Darlow in the sidecar.

The three Pitchford brothers, Harold (1926 AJS 350), David (1936 BSA 250) and Ralph of Dakar Rally fame (1926 Triumph 500) are also riding together. The second oldest rider of the Rally, Peter Dahl, who is also 89, will have Poekie Darlow in the sidecar of his 1922 Royal Enfield combination as his regular passenger, his wife. Laura, passed away last year.