Kel Boyce bought a Spanish-built Mototrans 24 Horas by mistake, believing it to be a Ducati. No problem; it was built to go racing and so that’s what he did with it…

So the road-going race replica I’d bought added up to a very overweight bike, right?

But don’t get too carried away because that bike stuck to the track like poo to a blanket and could take bumps, like those at Paddock Hill, Brands Hatch, without the chatter and weave which afflict a standard Duke. Consequently, the bike always seemed to be able to corner a bit faster than the Italians (although my weight of 14-plus stones might have helped here). The forks were absolutely superb and were the equal of many expensive Italian items designed solely for the track. I discovered just how good they were when the forks were destroyed in a crash at Brands and I had to fall back on Marzocchis. Those things twisted all over the place like a couple of chocolate bars – it’s a strange feeling cornering with the handlebars pointing one way and the front wheel pointing the other! I never replaced the forks but just had to knock the speed off slightly through corners.

I should say here that the crash which destroyed the forks was to come back and haunt me for the rest of the ’89 season. It took a few weeks to replace the wrecked parts although other parts that had taken a knock, but otherwise looked serviceable (carb rubber, condenser bracket, ignition coil and switch etc), were to fail in successive races. Racing the constantly sick bike, I was better able to hone my racing skills although, unsurprisingly, wins became scarce.

I’ve mentioned the front 4ls brake but, unfortunately, I never got it to work properly. Not being keen on spending hours setting it up, I swapped it for a double-sided sls Grimeca with road linings, which at least worked for scrutineering. Racing was a different matter for, although it worked tolerably well at Brands (used only at uphill-approach Druids), it was kinda scary at, say, the Esses at Snetterton, the Hairpin at Mallory, and Devil’s Elbow, Lydden, In fact the brake would only work once at the latter corner and you wouldn’t see it again for the rest of the race. It was a case of just crash down through the gears, then chuck the old pig in and see what happens!’

OK so far, but could the Horrors win short-circuit races? It certainly could and first and second places were the norm at CRMC and Kent Racing Combine (KRC) meetings. The engine was never super-tuned and was merely fitted with a ‘green-and-white’ cam and a Borgo forged piston. The inlet port was flowed somewhat but never opened out to the extent that the valve guide would flap in the breeze – this was a common mod that gave a lot more top-end power, at the expense of bottom-end grunt and reliability (the guide could occasionally drop out!). 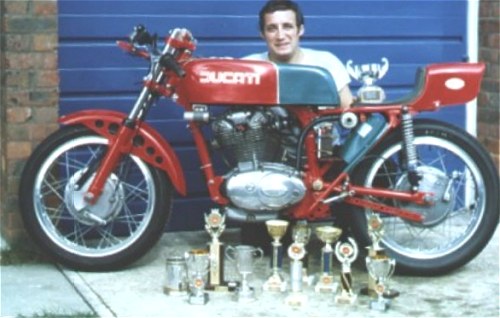 With my weight aboard, I considered going for top-end power a waste of time and concentrated on speed through and grunt out of corners. I remember on one occasion catching the then CRMC and KRC champion coming out of Clearways at Brands and slowly beginning (unbeknown to him) to overhaul his big-port Duke down the straight. When we hit the start/finish line, however, I was astonished to see his bike get a ‘second wind’ and pull out a six bike-length lead before Paddock Bend. Even though he had a special race frame I reckoned I could have an extra 5mph on him through Paddock. Sure enough, the old Horrors sat dead on line while I piled on the power really early and blasted past him, exiting the corner with an extra 10mph and leaving the stickers hanging from his fairing.

In all the time I was racing I never let on that the Spaniard was deficient in speed and many riders believed my bike to be faster than theirs – and all because of that road-holding and grunty road-tuned engine. It goes without saying that I usually kept well clear of tracks with really long straights like Snetterton, where the opposition would soon suss out the bike’s speed deficit. As a great rider once told me, ‘racing is 80% psychology’.

One high-tech mod that I undertook was the stopping up of the end of the hollow camshaft with silicone. This allowed more oil to get to the vulnerable cam and rockers and the bevels were left to survive on the oil that dribbled from the cambox – worked a treat. When I acquired a second (Italian) engine I modded this the same way although this lump came with a flashy Staschel con-rod (courtesy of the previous owner) but the accompanying full-race ‘red’ camshaft went in the bin.

I decided on replacing the hairpin valve springs with proprietary coils and shimmed them to allow the motor to rev to 11,000rpm just in case it was needed. I reduced the thickness of the shims when I learned that my brother (who I let race the bike on occasions) was regularly ‘maxing it out’. He was gutted when he found the bike would now only rev to 9000!

The original rocker pads I had re-chromed before putting the bike to use and these broke shortly afterwards, destroying the valve-gear train. The moral here – always have newly re-chromed rockers annealed unless you want an expensive repair job. The ‘silicon mod’, however, should prevent rapid cam and rocker wear.

In general the Duke and Mototrans engines are reliable and I only used one barrel and piston and one crankshaft and conrod all the time I raced the bike. The Achilles’ heel of the narrow-case motors, however, lies in the crankcases, which are prone to break up around the drive-side main bearing. As this usually causes the motor to lock up, I consider myself fortunate not to have personally experienced this particular failure! 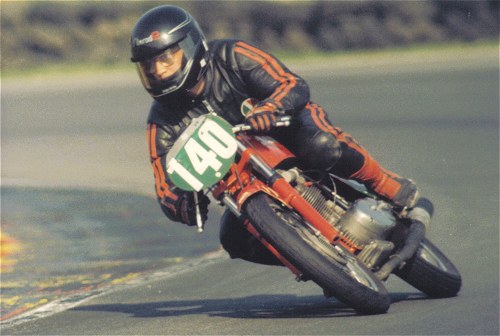 As I have already said, I decided against a highly-tuned engine but a close-ratio gear cluster seemed a good idea because, at most tracks, I had to use a lower top gear than the average jockey-like 250 rider. This was achieved by utilising more teeth on the rear sprocket which obviously affected all of the gears, making them slightly low for some corners. At Brands’ Druids Hairpin, the bike would skip and hop into the corner on the ‘over-run’ but this was totally cured by the higher second gear available with the close-ratio box.

By the way, the fitting of the (‘Wygatty’) gearbox cluster was a saga in itself and involved hours of filing and fitting as the gears did not fit as advertised. In use, however, the box was faultless – even if it did occasionally pick up false neutrals (a well known Duke bogey).

One other effective mod that I carried out was the fitting of an under-slung exhaust system Ã  la works Ducatis, which brought the pipe and long, tapering megaphone onto the left-hand side. This avoided grounding on most corners, which are often right-handers, and also took the exhaust clear of the drive-chain and gearchange lever. That exhaust sent test meters swinging to 128 db and I was thrown out of a couple of meetings because of it. Some heat resistant tape wound around the megaphone cured the problem but I note that Motogp bikes are now allowed 130-plus db (don’t those big-bang V4 Ducatis sound great!).

Ducati and Mototrans narrow-case frames have swinging arms that have to be adjusted for lateral float by way of shims. On my bike, I devised a system whereby the final few thou of end-float could be taken up by tightening a long bolt that went through the hollow spindle. Now, I am not proud of this obvious ‘bodge’ but it sure kept the swinging arm taut and avoided periodic re-shimming.

I never ran the 24 Horas with a fairing as the one that came with the bike was very thick and, consequently, very heavy. I could have got hold of another fairing but, as I was rather large for a 250 machine and could not get fully behind the screen, I decided not to bother.

So there you have it, a good solid race-bike from Barcelona – but don’t just take my word for it, take a look at Mick Walker’s book ‘Ducati Singles’ for his opinion of the 24 -Horas (who knows more about Dukes than Mick Walker?). And, if you see a ’24 Horas’ for sale then, hey, don’t be afraid, grab it quick – you’ll not regret it. 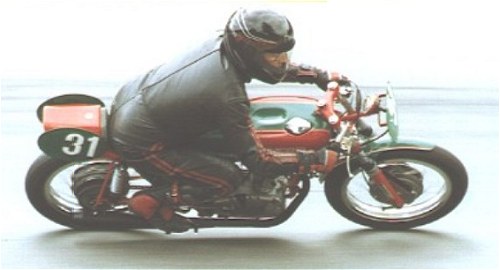