In the first instalment of this short saga, we met Ash Gannicott and his miniature Italian cafe-racer project. Russ (Ash’s dad) Gannicott takes up the tale of a first time classic bike rebuild…

The non-running, 125cc Mototrans Ducati had been successfully stripped. Nothing much was wrong with the major components, apart from the nearside fork stanchion which was slightly bent, so we made a start on the rebuild. The first and most major job was the frame which Ash insisted had to be gold. A black frame I would have tackled myself, but gold was going to be a problem so I reluctantly accepted that we’d have to get it powder-coated. The frame, along with the bottom yoke, swinging arm and centrestand was duly despatched to Triple S and a couple of weeks later returned in all its glory. I have to say, I didn’t know powder coating, especially metallic could be that good, but the Triple S boys really know their stuff….fantastic and worth every penny of my tight budget.

In the time that the frame was away, Ash was busy with the Solvol and had the top yoke and headlight bracket nicely polished along with a few other parts needed for reassembly. Once we got the frame back we built and fitted the yokes and swinging arm along with a new pair of Hagon shocks. At this point I started to discover one of the shortcomings of the project… the inability to source very fundamental but small spares. 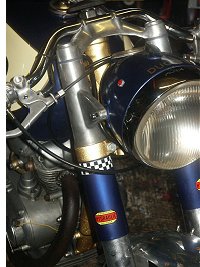 Fork seals were impossible to find as were threaded dome nuts for the rear shocks. The seals should be easy as there must be thousands of bikes fitted with 31.5mm Marzochi forks, but I had to resort to honing down an oversize pair to fit the sliders.

As far as the shock nuts go, salvation came in the form of Laurie Richardson from Lincoln who turns out all sorts of small bits for Ducatis in stainless steel from his garden workshop. Laurie was a chance find, as I came across him via eBay and have since had him make me loads of fixings including a lovely polished stainless front wheel spindle, all for very reasonable prices.

The wheels and hubs only needed a decent polish, 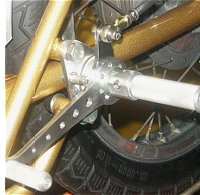 and the brakes overhauling before fitting and — hey presto! — we had a rolling chassis. The original footrests were replaced with homemade rearsets which I based around a pair of Tarrozzi folding pegs. The result is a pleasing, period-looking set of controls which work well, although they are rather on the cramped side for a six-footer like me.

It was at about this point that I realised I was getting a bit carried away with the project and it looked like it was going to be completed considerably ahead of schedule — about six or seven years ahead at this rate!

At this point I must mention another example of things going full circle. My first brand new bike was a Yamaha FS1E, bought by my Dad and I from Ray Fisher Motorcycles in Christchurch in 1973. 30 years on, I find myself and now my own son frequently leaning on the counter at Brit Bits chatting to Ray and his son about the old days. Two things haven’t changed though; Ray looks no different (spooky!) and his service is still second to none whether you just want advice or some hard to find part, even for a Mototrans Ducati! 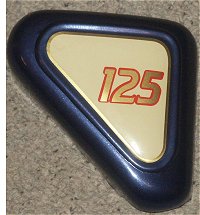 The paintwork was an ongoing job which took place while waiting for other bits to be finished off and was another thing we were going to do in-house. The seat was a special from Ducati racer and GRP specialist Ken Halliwell along with the replica Mach 1 tool boxes, all of which were treated to liberal coats of aerosol primer and Renault metallic blue.

Once we’d finally achieved an acceptable finish, everything was given a few coats of clear acrylic lacquer. The cream sides to the tank and side panels along with the other odd bits of graphics (including the chequered tape!) 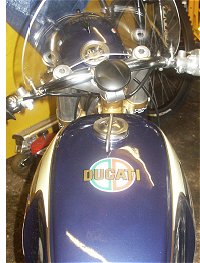 I produced at work from self-adhesive vinyl. The result may not be show standard, but it’s quite acceptable and Ash is delighted that we did it all ourselves. The upholstery was the same, with Ash and I taking turns on the old Singer hand sewing machine. Great fun.

Once all the rolling chassis was completed we fitted the engine, scratch built a wiring loom and hooked up a battery. Remarkably, the bike started first kick, but my God did it smoke! We lifted the barrel and it soon became apparent that the cause of this was a lack of lower oil control ring, with the other three being in about twelve pieces. The bore was OK, so a new set of rings was fitted, the engine retimed and we tried again.

This time, apart from some smoke from cold and a little out of the breather, the result was 100% better. The small amount of smoke we are left with is down to a worn exhaust valve guide, something we’ll attend to later once the rings have had a chance to bed in. Carburation needs some attention as we are in a ‘suck it and see’ situation with the Dell’orto. Slow running is a little rough but the engine revs cleanly through the rest of the range so I guess it’s just a matter of playing with pilot jet sizes.

The next job is to get the bike UK registered. We’ve got a dating letter confirming the year and model, so by the time you read this we would have got the MoT and should be well on the way to getting the bike on the road for the summer… as long as Ash keeps to his promise and lets me ‘borrow’ it for the next few years! 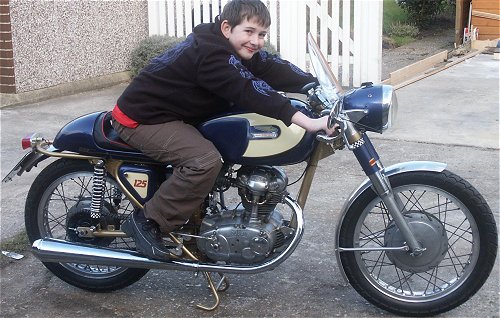 Initial short rides have shown the bike to be quite nippy and tractable for a 125 with all the nice handling characteristics you’d want from a small Ducati, even one that only produces about 10bhp. And Ash’s opinion? Well, he’s chuffed to say the least and will grab any chance he gets just to sit on it and grin in a way that only a nine year old can. As for the future; I can see Ash being able to kickstart and ride this by the time he’s ten (the way he’s growing) and before long he’ll be wanting to pull something else apart and rebuild it.

Will I stop him? What do you think?

Oh yes, what about that budget? Well, taking into account all the bits which were sold, swapped or traded, the final figure comes out at £1,054. OK, a little over budget but just for once I think I’ve managed to build a bike for about what it’s worth, as opposed to the usual hideous overspend that we all try to forget about! What, you haven’t done that? Be honest, I bet you have! 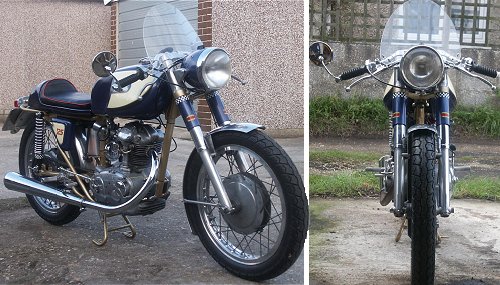