Only the brave can boast that they’ve attended the mid-winter Dragon Rally. This book explains how it started and what makes it so special…

This book covers nearly 50 years of the historic Welsh Dragon Motorcycle Rally, from 1962 to date, and it comprises of a collection of articles, stories, statistics and photographs from riders who have attended the rally over the years.

Carol herself has attended the rally a few times; however, her husband, Rod, has 26 rallies under his belt. The book came about because Rod had pestered Carol for years to write a book about the rally.

This 130-page book goes right back to the very first Dragon Rally, when it was felt that there was a need for a motorcycle rally in the UK similar to the Elephant Rally held at the Nurburgring in Germany in January.

Harry Louis, editor of the Motor Cycle Magazine (the Blue ‘Un) sent reporter John Ebbrell to North Wales to search for the ideal location for the rally with Conwy Motorcycle Club members and their Chairman, Don Williams.

Wales was decided as an ideal place to hold such a rally, as it is fairly accessible from most of the mainland. The Conwy Motorcycle Club was very enthusiastic about the idea and they have since organised all of the rallies. February was the chosen month, in order to give the riders who had attended the Elephant Rally time to thaw out before the Dragon!

So what is the secret of the Dragon Rally, which keeps going year after year and drawing thousands of riders across often ice-bound roads and into the snow-clad mountains of North Wales? It is the enthusiasm of the rallyists, and their desire to get the coveted badge, which cannot be got by any other means than by attending the rally. It is also a great meeting place for riders from many countries and riding many machines – small and large and old and new alike.

The first rally was held in 1962 in Bryn Bras Castle and its grounds, and it was a great success. Over 2000 riders attended. Despite the snow the night-time Headlight Parade created a snake of glittering lights five miles long! Nine staff members of Motor Cycle magazine rode to the rally.

In 1963 Ernst Leverkus, the founder of the Elephant Rally, and his wife, Inge, attended the Dragon, having ridden their BMW outfit there from Germany and there is a picture of him being presented with a badge by Tiny Tanner on behalf of the Federation of Sidecar Clubs. This time the rally was held at Gwrych Castle near Abergele. Unfortunately Ernst had missed the first Dragon due to ill health.

The rallies were a great success. However, unfortunately over the years an unruly element often arrived in cars, causing trouble. The club countered this by getting the rallyists to pay for their entry tickets in advance, and then, at the end of January, the club would send the riders the position of a control point. You would take your ticket to the control point, and you were then told the exact location of the rally. This system worked well, and it is still in place today.

For all Dragon rallyists this book is a great read; for those who attended in the past, those still attending, and for those who think that they might like to attend in the future.

For those travelling back to the south east of the country the Oxford Sidecar Club ran a Dragon brew-up and thaw-out station for returning rallyists by the Oxford By-pass, providing hot food and drinks and braziers for a warm-up. I called here on my return from the Dragon one year. On one Sunday the club used up 500 bread rolls and 28 pounds of sausages! Over the years the fame of this stop-off point has spread, and many returning rallyists go out of their way to get here for a final chat and a brew. 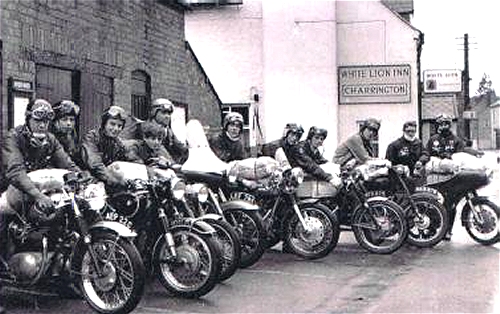 Another thing to think about is the financial aspect over all the years of all of those riders heading off to Wales – all the beer drunk, food eaten and petrol purchased in a tourist area during their quiet winter period has given the local economy a good boost.

This book is based on stories of riders’ personal battles, often humorous, to get to the Dragon Rally. In the tales told the camaraderie of the rallyists shines through – it was always there and still is, both at the rally sites and on the roads leading to it. The book is a great read. One Dutch rider said that ‘This was the best rally in Europe – no cars at all’.

Well done to Rod for being a pest and for badgering Carol into writing such a cracking good book. A very enjoyable read.

‘The Dragon Motorcycle Rally’ by Carol Morgan is available from the author via morganmaps@btinternet.com, price £11.99 plus delivery.