What is a ‘classic’? It’s one of those abstract questions that has fuelled a million internet arguments, ever since the first bulletin board was set up for people to talk about old vehicles. Andy Wegg adds fuel to the fire with a Jawa Mustang and some 500cc Hondas…

‘Classic’ is one of those unfortunate words that has had its meaning subtly demoted in recent times – in the same way that ‘hero’ can now apparently be applied to footballers and murderers as well as to soldiers standing in the face of impossible odds to defend their mates or people rescuing children from burning buildings.

Today ‘classic’ seems to be more or less interchangeable with ‘old’ and maybe vehicles do somehow become gradually more ‘classic’ as they age, however dreadful they were when they were new. Maybe even the very worst ones get there eventually when the awful memories of past owners have finally receded far enough and the pool of survivors has been whittled away to a few good examples.

Even then there’s probably going to be some obtuse group of supporters. Witness the frothing howl of outrage directed at Top Gear after Clarkson and co. destroyed a Morris Marina – a truly hateful effusion of the death throes of the British industry if there ever was one. For every person that knows that a Bonneville is a proper classic there will almost always be someone else to maintain that their Jawa Mustang is more of a classic than some common or garden Triumph.

So ‘classic’ isn’t necessarily something old – to be classic, it has to have that certain something that raises it above the ordinary or to be the exemplar from which everything else takes its cue – or to have been built in ancient Greece.

Jawa Mustang: not a classic?

In fact, a classic could even be a new bike. It could easily be argued that a Triumph Speed Triple fits the definition, although probably not a current Enfield. However, we can safely say that bikes that were rubbish when they were new are never going to be classic – such as the Jawa Mustang. What you have today, should you own one (and you have my sympathies if you do), is not a classic. It was a rubbish bike when it was new, and now it’s just a rubbish bike that’s old. Unless you can prove it was once owned by Pythagoras, I suppose.

The prime example of why all old bikes aren’t automatically ‘classic’ must be the 1970s Honda CB500T. A 500 twin that was developed from the legendary CB450 would seem to have been almost automatically a classic in the making when it was released, but sadly it was not to be. Honda managed to mishandle the styling that aped classic British bikes and produced a strange lumpy looking bike that came in a nasty biological shade of brown or an eye watering orange. 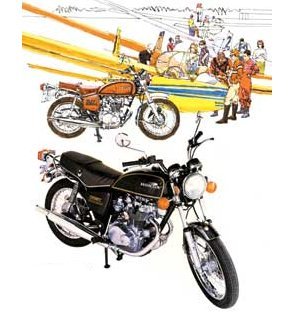 Jawas (classic or not) on now……

That might have been overlooked, had the bike been any good, but it wasn’t. At all. The real problem was the disastrous 500cc engine, although having a stodgy gear box and soggy handling into the bargain didn’t help. The sweet 450 engine had been given a longer stroke to achieve the larger capacity and became horribly vibratory while the longest cam chain in history had a tendency to jump off the cams.

By the early ’80s they were already rare – however rarity didn’t translate into value or classic status as they were unwanted and almost worthless despite being barely a few years old in a time when second hand values tended to hold up more than they do today. The few survivors now tend to change hands regularly as the folk memory of just how awful the 500 was has faded and people think this is a cheap way into the classic bike world, only to be rapidly disillusioned.

Is it that simple though? There’s never going to be a right answer as a classic is in the eye of the beholder and even bad bikes that themselves will never be classic can have some surprising classic characteristics.

It seems unfair to pick on Honda again, but Honda’s early 80s VT500E comes from the period when Honda had a habit of releasing under-developed products onto an unsuspecting clientele, so they can’t really complain too much. I’m not sure if “E” in VT500E stood for ‘Execrable’ or ‘Egregious’, but frankly either term is as good as the other, as the VT was one of the nastiest bikes I’ve ever had the misfortune to ride. 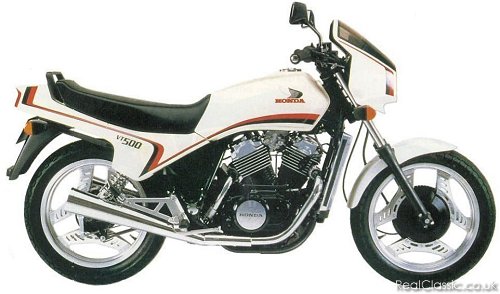 The main culprit was a twitchy, confidence sapping front end and high speed instability particularly with a pillion or a load on the back. Going faster than I should have on one while loaded with a pillion, top box and camping kit, I really thought my last moments had come as I leant the bike into a corner only to have the thing go horribly light with the sensation that the front wheel was about to wash out. Then there was that useless, enclosed front disk brake that even Honda had quickly realised was a dead end, a tendency to seize the rear cylinder and a side stand that was poised to tip the bike over in a slight breeze.

Some might say that a million couriers can’t be wrong as the VT was once a common sight in London, but London couriers are rarely aficionados of fine motorcycles, they just want a cheap and reliable ride. The VT was horrible to ride but it was reasonably robust despite everything and it was, most importantly, seriously cheap. All of Honda’s V range had suffered by association from the fall-out from the lamentable VF750 and by 1985 any Honda V was firmly stuck to the showroom floor unless it was given a shove by a chunky discount.

Working at a major Honda dealer back in the day, I sold boatloads of them at rock bottom prices to the courier firms who leased them out to their contract riders and then cannibalised them to keep the survivors going at minimum cost. The real truth of the matter is that the VT was outlasted on the courier circuit by its predecessor – the venerable CX. 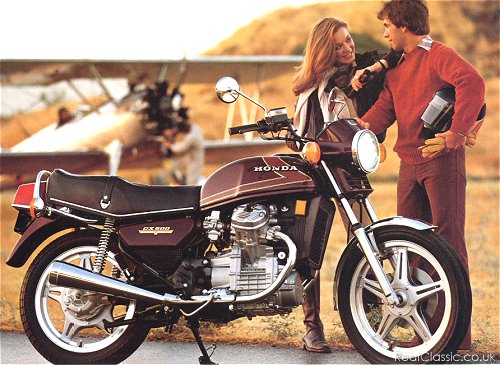 So it’s fair to say that the VT500 is no classic. But even a bad bike like the VT hid a classic secret – refined and bored out, the engine was transplanted into the Transalp and NTV ranges and survives in today’s Honda Deauville where it has earned a reputation for the ability to clock up huge mileages.

So there we have it; not all old bikes are classic although some may be more classic than they ought to be.

However, this leads on to an interesting thought. We are, it seems, in a golden age of motorcycling where there is more choice than ever before and we can choose from a plethora of well built, well designed machines.

It’s difficult to buy a bad bike these days. It’s not completely impossible as there’s still a great deal of two wheeled rubbish being built – all those cheap Cambodian 125s and so on – but the main firms rarely produce a complete lemon these days. And if everything’s good, does that mean in the future all old bikes really will be classic? Or, in the words of Syndrome, the villain from the superb animated film ‘The Incredibles’;

“Everyone will be special. And when everyone’s special – no one will be”.

Does this mean the impending death of the classic?