Kel Boyce looks back upon owning and riding his GT, and compares its engineering to Italian and Japanese machines of the era. Then he decides he quite liked after all…

After rebuilding it, I ran the GT for about four years by which time I was ready to move on to something different. The bike was great for slinging around the narrow, twisty lanes in the local area – far better than my 650SS Norton — but the archaic forks and the crudity of the engine were peeing me off.

The GT was sold to a wide-eyed, drooling youth for 500 quid and replaced with an immaculate, more civilised 350 MkIII ‘wide-case’ Ducati for 600 quid. Bargain! Unlike the GT, the Duke was low mileage and the cosmetics had been lovingly restored to perfection.

Later, I was to take the Duke to an RE rally in Essex, where it was voted the best bike. Unfortunately, the organisers decided they couldn’t give the Duke first prize without being lynched and demoted it to third… 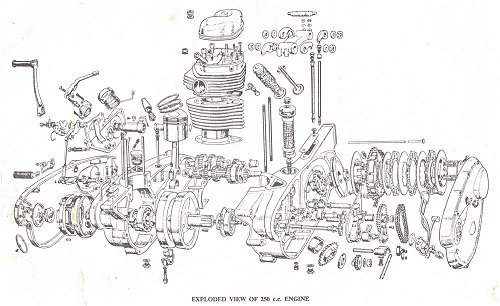 Overall, I think the design of the 250 RE was flawed on several fronts. Firstly, the engine contained too many ‘bits’. More bits mean more time to assemble and more chance for something to go wrong. It also meant more money to produce and reduced profits for RE, although Honda also made ‘bitty’ engines but seemed to be doing OK at the time (we were later to discover they’d nearly gone bust in ’67). Take a look at BSA and Triumph twins – there are very few surplus bits in these motors of three times the capacity. Then there are, of course, the BSA-Triumph ‘triples’ fashioned from the twins but we’ll not go there – suffice to say that if you pull one down you’ll need four tea-chests just for the castings!

One thing you notice when stripping an old British mill (as opposed to a Jap or Italian one) is the appalling fit between individual components. On the GT, for instance, when you release the engine’s outer covers they just fall off of their dowels. Compare this with a Duke where you’ll be straining to pull a cover off and spend an age looking for non-existent screws. Put simply, the Brit motorcycle industry didn’t have the wit or the will to build to a tolerance of less than 1/16 inch. Did I hear something about steam engines running on petrol? Now that’s unkind!

The reason for the 250 RE designer (RA Wilson-Jones, CEng., MI Mech E, BSc) putting the oil tank in the middle of the engine is something beyond my comprehension. Ducati and other unit-construction engine manufacturers put it at the bottom of the engine where it could be cooled within a finned sump. The GT dipstick seems like a good idea but, if the day is only slightly warm, the hot, urine-thin oil runs off the stick before it can be read. I tried to use straight-50 oil, which was great on hot days but, if the temperature dipped, the motor was almost impossible to turn over from cold. Has anyone tried synthetics?

I wouldn’t be surprised if the short life span of the big-end isn’t partly due to this issue of the oil getting too hot. Furthermore, the length and diameter of the ‘Medusa’s head’ oil pipes can’t be an aid to stabilising oil pressure and neither can the pathetic oil pump which tries to fill them. I certainly wouldn’t have the faith that Russ Gannicott had and go racing on one, although I’d guess that the motor is better cooled and better lubed at race speeds.

One other problem I’ve found with the GT (and this applies to all Brit sports bikes) is that, when you fall off, the rev-counter drive is often ripped out of the engine case. This happened to me once and I never fitted one again – to be honest it’s completely unnecessary on this old slogger anyway. 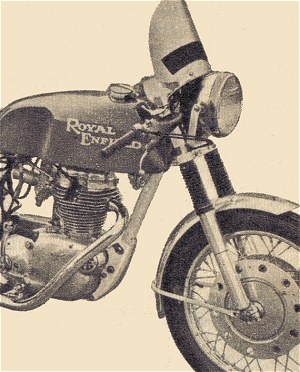 On the plus side, the GT is a delightful machine to throw around country lanes on a summer’s evening but that’s really the limit of its usefulness. As for the ‘oilfield’ legend, it’s simply not true unless, of course, the piston group is knackered or a monkey has rebuilt the engine.

These days I spend my time blatting around the tight, twisty lanes of the Lincolnshire Wolds, where I now live, but every so often my mind turns to the GT and I yearn for that superb chuckability… I suppose it’s those rose-tinted spectacles again!

BELATED THANKS are due to Jack Gray and Tony Cook of Hither Green who both supplied technical info for the GT rebuild. More thanks also to Tony for the welding jobs and whose stock of helicoil inserts I seriously depleted prior to getting my own!