Kel Boyce paid £40 for his non-running Continental back in 1979 and, bearing in mind how much work it needed ,that might have been over the top…

The first step was to remove the wheels. The hubs and drums seemed OK but the rims and spokes were almost devoid of plating. I set about dismantling the wheels but ‘hey, wait a minute – the front wheel’s an 18-inch and the rear’s a 17-inch!’

A quick call to Enfield specialist Jack Gray, however, confirmed that this strange mix was correct, if against modern practice where you might fit a smaller front to ‘quicken up’ the steering. Apparently, it’s all about stability over bumps (GT forks aren’t that clever!)

The battered (and useless) ‘bacon slicers’ were removed from the front wheel with a view to either replacing or restoring them – they never went back.

An examination of the swinging arm revealed one leg up and one down, a legacy, apparently, of a collision with a bus that also ‘graunched’ the left front fork slider. The rear suspension units had come from some sort of lightweight Honda and were stamped ‘Pogo’ or other such name – bin job!

I removed and junked the fibreglass seat, which seemed to have been intended for a big twin but everything else was standard although the front mudguard, the battery / coil cover, and the flyscreen were completely missing. The exhaust system and most bolts were coloured a lovely shade of ginger. 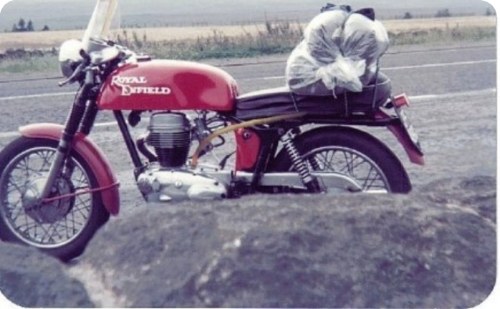 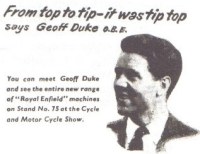 The engine looked a bit oily but the crankcases carried the GT stamp and were the genuine article. All gears could be found when moving the change lever – a good start.

The lump was removed (not a long job as half the engine bolts were missing) and the head lifted. This revealed the reason for the engine stoppage – a great chunk of valve head had gone through the top of piston!

Further investigation revealed that the cause of the calamity was the 1/8th inch play in the big end that had allowed piston and valve to come into contact.

No more problems were encountered in the engine unit, except that virtually every screw and thread in the cases was buggered. The motor had obviously been rebuilt many times, and by morons to boot!

The oil pump had me in fits of laughter the first time I saw it – just an oscillating lump of bronze with a couple of (what seemed to be) split pins going up and down inside it. What a joke!

Another sick joke was the ‘Medusa’s head’ of copper tubes that distributed oil around the engine. The question was, ‘why’? Having mulled this question over for years, I can only conclude that, with the pump being high-mounted at the front of the engine, and there being no room for drilled oil galleries, only these copper pipes could do the job.

My guess is that die-casting was in its infancy at the time, so thin-wall galleries could not be cast into the crankcases. 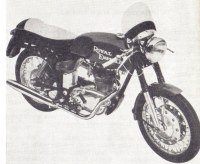 By the way, never wave one of these Medusas about in the street or you’ll be nicked for having an offensive weapon – it looks like something from a Ninja’s weapons box…

Likewise, the GT camshaft was a revelation, with concave areas on both lobes, which gave the impression that the valves would open and then partially close before full lift was attained – very strange! 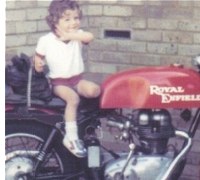 I set out to acquire a helicoil kit and put out a call for spares. I was soon inundated with enough gratis spares to last a lifetime (it’s funny how people never attempt to actually sell 250 RE spares).

Soon, I’d have to begin the restoration… 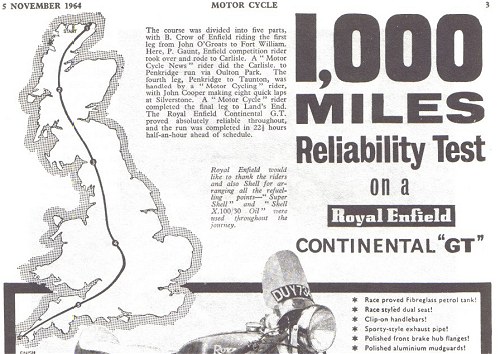