Which bike lived in your teenage dreams when you first started riding? Kel Boyce aspired to Enfield’s sporting 250, and he didn’t manage to grow out of it…

The Continental GT. What can I say? The dream bike of every learner rider of the mid-1960s. Seen as the saviour of an ailing Royal Enfield company from the massed hoards of Japanese and Italian lightweights, the Continental GT was, essentially, a Latinized version of the workaday Crusader.

Latinized? Sure! The bright red fibreglass tank, polychrome-silver frame, grey handlebar grips, hump-backed, two-tone seat, and the natty flyscreen were there to obscure the fact that this was a bastardised son of Old Blighty. The GT bits, as well as the name, could all have originated on an Italian sports motor-scooter.

After building the prototype GT, Enfield needed to out-plug the Japs in the advertising stakes. Honda were running full-page ads in the motorcycle (and national!) press, extolling the virtues of their high-tech machines that ran ‘like Swiss watches’.

What did Enfield do? They took a standard GT, in the winter of 1964, and ran it non-stop from John O’ Groats to Land’s End via Silverstone race circuit, where a certain John ‘Moon Eyes’ Cooper gave it umpteen full-bore laps around the snow-bound track. He completed the session at an average speed of 70.29mph, with a fastest lap of 73mph and the whole ‘end to end’ took 22 hours and 20 minutes.

Enfield did not take out full-page ads like Honda but ran a half page piece stating that the GT was Britain’s fastest 250 and positively dripped with (impractical it turned out) ‘goodies’. 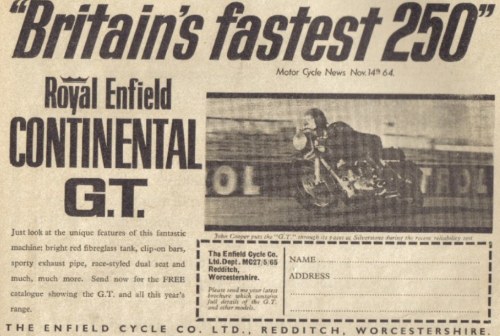 Make no mistake, the GT looked a million dollars standing, sparkling-new, in the dealer’s shop window but, sadly, deep in the back, lurked the fully-depreciated remains of many rider’s dreams – 18 month old GTs with peeling paintwork and that tell-tale of a duff design, a pool of oil lying beneath. These relics sold for around £170, which represented a Jap-style depreciation rate of 66% from new.

These shocking sights did not deter me and my mates from dreaming, but lack of an HP guarantor and sheer practicality dictated that I should buy a beat-up old BSA M21, later traded for a Super Rocket. Meanwhile, as the 60s wore on, the GT gradually disappeared from both the road and my memory.

I took to sidecar grass-track racing with a succession of mainly twin-cylinder powered (what else?) outfits and, when I packed up in 1976, I bought a 650SS Norton road bike. This was a logical choice as, by then, twins were all I understood. 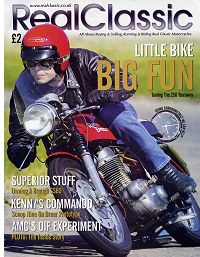 All changed, however, in 1979 when, as I was about to ride off on the SS, a rattly old single with a flame red tank pulled up across the road. Its rider dismounted and entered a neighbour’s house, leaving the hot machine tinking in a cloud of oily vapour. ‘Flock me’, I thought: ‘it’s a GT!’

Later, I spoke to my neighbour and it transpired that the machine belonged to a relative who had acquired the oil-spewing heap for a song. Then, some weeks later, I was told that the bike had stopped and was up for sale. Gleefully, I bought the sorry mess for 40 quid.

Was I robbed? You bet!

On getting the bike home, I set about discovering why the engine had packed up, the aim being to get the bike running and back on the road straightaway. Unfortunately, it was soon clear that the GT was in a complete mess and required a total restoration. This was destined to take up the best part of the following year…