Some folk fall off their bikes. A surprise, it’s true, but Frank Westworth is one of them. Someone is to blame! Someone must pay!…

I was pulling into the driveway at RCHQ Bude when Jack, the imaginatively-named black tomcat, ran under the front wheel. I braked. This is a reflex action. Running over the cat would have been the cheaper option. The RCHQ Bude driveway is badly surfaced. The front wheel locked. Slid sideways, noisily. The cat slid off, silently.

I have a feeling that I was witnessing some sort of mysterious feline powerplay. The black tomcat was possibly testing the mettle of the bike, a green Tiger. The black tomcat won; the Tiger fell to the ground, groaning and grinding. The 1998 Tiger 900 is not one of Hinckley’s lighter motorcycles, and trying to stop it falling is like trying to stop politicians lying; valiant but doomed.

I cursed a little in a therapeutic way and picked the bike up. When a Tiger falls, the only thing to do is to let it and to remain standing while it does it. It is not difficult to pick them up, provided that a lot of help and maybe a helicopter lift are at hand. I cursed. Again.

What this poor and unhappy man (he may be neither poor nor unhappy; I am however charitable) was asking was that you and I pay for his mistake. I doubt that he understood that he was in fact asking you and me personally to pay for his inability to control his motorcycle, but think about it, just for a tiny moment. He pulled over to the side of the road. He braked. He fell off. Apply expressions of sympathy at this point if you wish. I have done the exact same thing. More than once. The last time I did it, I rode a bike into a kerb and we all fell to the floor. My alleged friends roared with laughter. It was a simple mistake. I mistook the kerb for a white line. They look much the same to me at dusk. Should I have sued the council (or anyone else) for not posting a big sign every couple of yards announcing that This Is A Kerb Not A White Line, or for painting their kerbs the exact same shade of white as the white lines? Or should I have been more careful?

Councils and insurance companies do not pay compensation out of their own pockets. They charge you and me for the money. This is known by Guardian readers and BBC Radio 4 listeners as ‘the compensation culture’, in which everyone pays for mistakes they don’t make. Everything is somehow and mysteriously someone’s fault. Except that of the person making the mistake. BBC Radio 4 advised me this very morning that some £2,000,000,000 is paid out every year in compensation, often for imaginary injuries (whiplash is favourite, apparently). And who in fact pays for it? Policyholders (that’s you and I) or taxpayers (that’s you and I) or council taxpayers (guess who!).

The next time you’re out on your motorcycle, be it ancient or modern, observe if you will how there is often gravel and other skiddy detritus at the edges of the roadway. It has been like that since I started riding in 1969 or so. It has not got any worse. In the country, there is also a lot of mud, manure and mysterious stuff which defies easy description. In urban areas there are also pedestrians, prams and pillocks. Please be warned. Please bear this in mind next time you ride a motorcycle and need to apply the brakes. 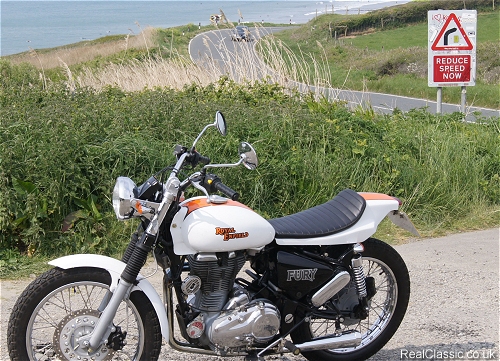 Please also remember that if you fall off, then we will all be sympathetic, every single tax and premium-paying one of us. No-one likes folk to hurt themselves. But if you have dropped your bike because you did not realise that there is skiddy stuff at the edge of the road then you need to learn that fact (although I bet you have learned it now). And if you did not see it, then you were either not looking or you need an eye test.

When I dropped the Tiger, I did wonder about suing RCHQ Bude for their lamentably poorly maintained driveway. Then I realised that I would be suing myself. Which is what folk demanding compensation for avoidable accidents also forget. They pay insurance premiums too, and although a claim of a few thousand is a good return on an investment of a few hundred, if we all did it, we would all be priced off the road PDQ. Which I would not enjoy…