What’s new in the world of old bikes? Classic Japs on display in Scotland, a rare book on rockers returns, and replica Girlings now available from Goffy…

The weekend of the 13th and 14th of December brought with it plenty of cold weather ice and snow, says RC reader John Nicholls in Eire. It also brought with it the Killarney toy run.

The run was organised by Tom Coffey, Mike Seamie and many other hard working folk who all deserve a ‘well done’ and Ho! Ho! Ho! The run set off from O’ Donohue’s garage at Killarney through Fossa, Milltown, Killorglin and on to the Climbers’ Rest at Glencar for soup and sandwiches.

The snow-laden hills resounded with the sound of Enfields, a Ural with sidecar, C50s, Harleys, BMWs, Vesper and many a nice Jap. In all 50 or 60 folk enjoyed this fine run out and many a child received a toy the may not have had if not for a dash good day out with like minded folk on their chosen steeds.

After distributing the goodies, the troop headed back to Killarney for a parade around town to the delight of Christmas shoppers and the surprise of children to see Santa out for a spin.

North of the Border

Anyone with a taste for Japanese machinery who lives in Scotland or northern England could do a lot worse that visit the Scottish Highland Show at Ingliston on the weekend of March 14th and 15th 2009. An eclectic mix of Oriental machinery is already committed to the VJMC’s stand including a Kawasaki GPX750R, Yamaha 350LC, Suzuki GP 100, Kawasaki Z 900, Kawasaki 750, Kawasaki GPZ750 Turbo, Yamaha XJ900F, Honda C95E, Suzuki AS100, Honda CBX550F2, Honda CB900. If you’d like to join the fun with the VJMC at this event then contact Bill Ferguson at jw.fergusonky11 @ btopenworld.com

Sales of the Royal Enfield Bullet grew by nearly 30% last year, bucking the national trend which saw motorcycle registrations fall by 3.4%. This is the ninth successive year of growth for the Bullet, which has been in continuous production for over 50 years, and overshadows the company’s impressive 15% rise in UK sales during 2007. ‘Motorcycling is predominantly a leisure activity these days and the classic styling and low running costs of the Royal Enfield make it an attractive proposition at times when money is tight,’ explains ‘Big’ Ben Matthews, UK Sales Director for Royal Enfield and a man of not inconsiderable tallness…

From 2009 all new Royal Enfield motorcycles sold in Europe will be powered by the company’s new 500cc unit construction fuel injected engine. Its modern design is more powerful, producing 41.3 Nm of torque at 4000rpm, but the pushrod construction, with a bore of 84mm and 90mm stroke, still delivers an authentic-feeling ‘British Single’ experience. 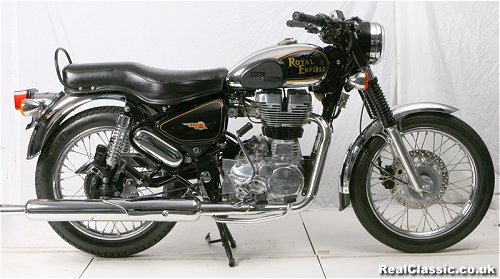 To keep the breed’s traditional audience content, one of the first new models to be made available is the Deluxe. Featuring a black and chrome tank with gold pinstripes and rubber knee pads, the Electra EFI DL captures the essence of British motorcycles from the 1950s and 60s. Chrome mudguards front and rear, chrome tool box covers and authentic Avon Speedmaster tyres enhance the period appearance of this 500cc air-cooled single.

The impression of a classic British bike is reinforced by the exhaust note and character of the engine, which retains the same pushrod construction, with a bore of 84mm and 90mm stroke, as in the original Bullet motorcycle.

If you’d like to try one of the new EFI Enfields before you buy, then plan to join the RC Crew at Royal Enfield’s UK headquarters in the Cotswolds on June 20th and 21st 2009. The current range of EFI bikes will be available to test ride, with factory staff at hand to answer your queries. Or if you can’t wait until then, demonstrator machines are available from Royal Enfield dealers across the UK. The Electra EFI DL sells for £4007 on the road. Contact 01386 700907 or visit www.royal-enfield.com

The winner in the VMCC’s end of year raffle was Iain Murdoch who was presented with this handsome 1969 A65 Lightning just in time for Christmas. The club are repeating this popular competition over January to June 2009, this time with a 1964 Velocette Venom as first prize. 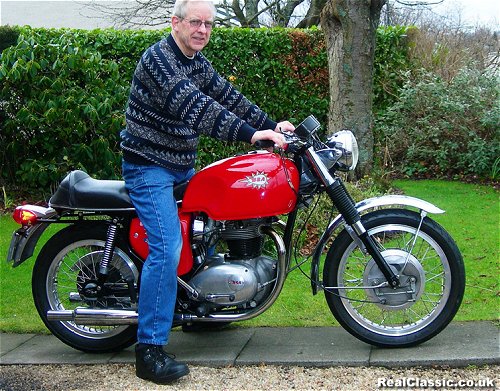 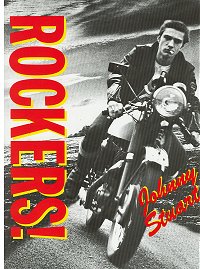 Rocker Book Is Back

Johnny Stuart’s captivating book ‘Rockers’ has been re-published after many years out of print.

Illustrated with over 170 rare and evocative black and white photographs, this large format soft-back book captures and brings to life the danger, the myth, the magic and melancholy of a unique youth culture which continues to fascinate and endure.

Kawasaki Racer Up For Grabs

The 600 Kawasaki which Chris Martin rode to sixth place in the British Supersport Championship last year is currently on display at the Sammy Miller Museum in Hampshire. If you’d like to do more than just look at the Kwacker then it’s being offered for sale by the Gearlink team- serious enquiries only to 01722 711444 – or you can drool over it at the Miller Museum at New Milton (check opening times during the winter on 01425 616644). 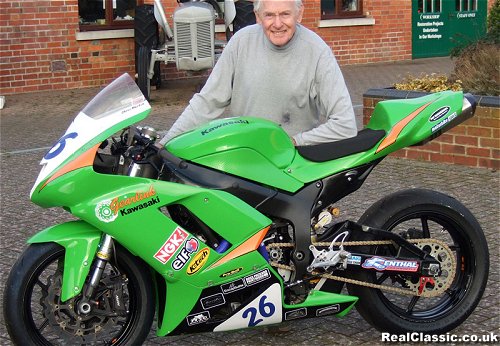