In this newsround: driving licence fees are set to fall, save money on classic bike insurance, a new autojumble auction in Kent in September, classic racing, historic camping, and more…

For the first time, the Romney Marsh Bikejumble on Sunday 21st September 2014 will include an auction of spare motorcycle components. You can bring your surplus spares and old bike bits along on the day; lots can be entered from between 10am and noon on the morning and the auction starts at 1pm. There’s no fee to enter lots, but a 10% fee applies to vendors and buyers on successful sales. Expected lots include a 1994 Moto Guzzi California, a quantity of motorcycle wheels, a quantity of British bike autojumble, enamel signs, petrol cans, and plenty of other assorted autojumble oddments. It’s a great opportunity to clear some shed space – you’ll help someone else complete their project and stick a couple of quid in the coffers for your own ambitions!

Several of the classic racing championships in the VMCC’s BHR series were wrapped up at Darley Moor last month, leaving five classes to be determined at the series’ final round at Cadwell Park on the last weekend of September. Among the class-winners are Mervyn Stratford on his beautifully engineered 250cc Rudge; Graham Buller who rides a Norton Manx; Dave Matravers on another Manx; Richard Stubbs on his BMW R100; Bobby Bevan aboard his Norton Commando; Scott Harris also aboard a Norton, and Bill and Maggie Tuer of Morgan Racing. 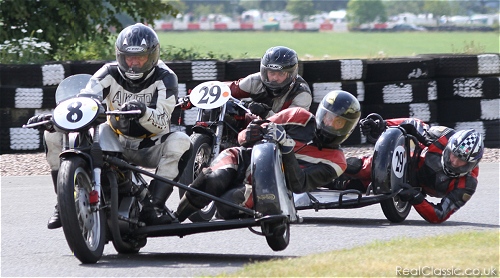 This leaves 250cc 1963-72 class to be decided between Ducati riders Andy Hunt and Rob Butler, while Mike Bevan is just two points away from claiming the pre-1963 solo title on his Norton Dominator. A pair of Seeley G50s will be fighting over 500cc solo honours, and several sidecar classes are due to go right down to the wire. The BSA Bantam championship races have been closely fought between several people all named Mike – full results and details of the final round are available at

The first Historic Bike Summer Camp in North Yorkshire was a resounding success, with 50 riders bringing a varied selection of pre-1974 motorcycles, representing 13 different bike clubs. Entrants travelled from all over the country, and seven riders were in close contention for the Long Distance Award by clocking up between 269 and 287 miles apiece. The organisers plan to repeat the success next year, at a different location, where all pre-1975 bikes will be welcomed. Check the for details when they’re announced.

A new discount plan for classic bike insurance has been launched as part of the National Motorcycle Museum’s ‘Friends’ scheme.

Backed by well-established insurance specialist Footman James, the scheme provides low premiums for Friends of the NMM plus specialist cover by tailored to classic machines a classic motorcycle ‘young enthusiasts’ scheme for 18 year olds interested in pursuing the hobby; hassle-free agreed value without additional paperwork or photos (value limits apply), and a dedicated phoneline for NMM Friends on 0800 298 6643.

The insurance scheme is one of a wide range of benefits of NMM Friends membership which costs £29.95 from

A new public consultation on driver licensing fees includes a proposal to reduce driving licence fees by 32% for digital transactions and 15% for paper applications. As part of the proposals, drivers who apply online for their first driving licence would see the fee drop from £50 to £34. Drivers who renew their licence after 10 years would see the fee drop from £20 to £14. DVLA is currently reviewing all the fees they charge to motorists and this consultation is the first step in this ongoing review. You can see the new proposals and contribute to the process at

The consultation closes on 25th August 2014; allowing for the parliamentary process the new fees are planned to come into force by 31st October 2014.

If you’d like to read more from your favourite RealClassic writers then you’re in luck: several of the regular contributors to the magazine have new publications available right now. The ever-entertaining Odgie tells his own life-story in Crazy Odge: Confessions of an Esoteric Engineer ().

Colin Sparrow, Greeves marque expert shares his extensive understanding of the bikes and their history in ‘Greeves: the complete story’ by Crowood Press, which includes plenty of expert advice about owning and running a Greeves as your classic today (

Finally, RC editor Frank Westworth unleashes a new fictional creation into the crime-thriller milieu in the shape of anti-hero JJ Stoner who makes his bow in First Contract, on Kindle (

). You won’t find too many old bikes in that last one, although a Harley-Davidson does make a guest appearance!