Good news for owners of BSA unit singles or Velos fitted with Miller electrics; plus details of where you can see Foggy and Jamie on stage in May, and a chance to see classic Japanese motorcycles on track at Donington…

We got 2014 off to a jolly start with a competition for RealClassic magazine subscribers – obviously the prize of a brand-new crash helmet was too tempting because we were fair deluged by entries! If you didn’t hear from us then (stating-the-obvious-alert) you weren’t one of the lucky winners, but just to make things totally clear we’ll congratulate Richard Hardman, Mike Slater and Rob Hunter. Who did win. Lucky them!

There are more giveaways and competitions which RC subscribers are welcome to enter, over at You will need to know your subscriberID (which we think is probably on the label of your magazine. Maybe). You probably deserve a prize just for surviving the registration process…

Giving It Gas at the NMM

Superbike legends Carl Fogarty and James Whitman are set to make a pit stop in Solihull on the latest lap of their UK chat show tour. Foggy and Whit have been revving up audiences for the last four years with their popular stage show ‘Givin It Gas’. They’ll be bringing the two-hour show, which features on-stage chats and questions from the audience, to the National Motorcycle Museum on the evening of Tuesday 13th May 2014. The tickets, which cost £20, include entry to the Museum collection itself. See

The world superbike audience at Donington circuit will be astonished to see a pack of Japanese classics on track during the lunchbreak on May 24th and 25th. The VJMC will be displaying a range of older Oriental icons in the exhibition centre over that weekend, and 20 of those big beasts will take part in the midday parades. Let’s hope none of them ooze any 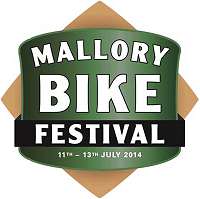 lube in the corners…

We’re still awaiting details of what exactly will be happening at the inaugural Mallory Bike Festival on July 11th to 13th 2014, and hopefully you’ll be able to enter (and indeed, find out exactly what you would be entering into) any day soon. Soonish. In the meanwhile, here’s a nice new logo.

For many BSA owners, Rupert Ratio’s comprehensive and accessible Unit Singles manual is their best friends in the shed. However, the first volume only covered the motor. The second volume is being published this spring and completes in the set by covering absolutely everything else. It applies to all the unit-construction singles; C15, B40, B25, B44, B50 and the Triumph TR25W and costs £22.95. Published by Panther and available to pre-order from


BSAs (singles and twins) on Now…

The Carole Nash Great Scottish Bike Show is expanding and making a move to the Royal Highland Centre near Edinburgh over the weekend of 9th and 10th August 2014. Visitors can expect to see both classic and modern motorcycles from clubs and private entries, manufacturers, trade stands, autojumbles and star guests. There’s also space for live-action stunt shows and added attractions. Advance tickets which cost just £6 are available from

After being unavailable for many moons, the armature suitable for Miller dynamos on Velocette and Vincent bikes are now back in stock at electrical specialist Paul Goff. The new armatures are top quality kit, made in England, and they cost £129 plus delivery. Both long and short field coils are also available at £42.95, all from / 01494 868218.