When we observed in RealClassic magazine that two similar classic bikes were using their tyres very differently, and wondered what it could mean, RC readers provided all kinds of answers…

My Norton Commander needs a new rear tyre, which comes as a surprise. It’s many years since I wore a tyre out in about four months. It’s not even as though that particular Norton has been the mainstay Norton, either; my other regular ride still has a decent amount of groove in its Avons. Both Nortons are basically the same; the eccentric rotaries which I enjoy so much. But they have one considerable difference; one has a full fairing and hard luggage, while the other doesn’t. Their mileages this year have been similar, but the tyre wear is considerably dissimilar. Is it the weight of all that plastic? I did wonder about this, but was unconvinced. Extra weight puts more load on the rear tyre when accelerating at the same rate, and more load on the front when doing the deceleration thing, but I wouldn’t have thought it was enough to matter.

I have developed a new theory. When riding the unfaired bike I tend to avoid big fast roads like dull carriageways and monotonous motorways. The lighter machine is much more fun on the twisty stuff, where the heavy tourer reduces journey times by cruising at quasi-legal speeds on dull roads. If the theory is correct, then the wear pattern on the balding rear tyre should leave it with plenty of tread on the edges and a lack of groove in the middle. And yes; it is exactly like that. The edges of both tyres, which have ridden similar mileages, are almost identically treaded, while the centre grooves of the heavy bike are almost gone. QED?

There is another thing. When riding the faired bike on those long dull roads I find myself arriving earlier than I’d anticipated; I do in fact ride it about 10mph faster on average and cruise along with the rest of the outer lane traffic. Not so on the unfaired machine, where the battering does get tiring. I read somewhere once that wear rates rise exponentially as a function of speed. Is this true? Both front tyres are identically worn. How can that be?

Meanwhile, the tyres on Rowena’s MT350 have plenty of tread left but – judging from the skid mark on the drive – little in the way of grip. They are far from worn out. So should they be replaced?

You are correct in assuming that tyres do have a shelf life and have a host of markings and information on the sidewall. These indicate information for load and speed ratings, tyre size and aspect ratio, rim size, etc. The part that refers to the date of manufacture, and hence its age, is the group of numbers that follow the DOT information on the tyre. The DOT refers to information initiated by the Department of Transport in North America and will consist of a collection of letters which are codes for the factory, size, brand, construction and pattern. The last four digits, often in a lozenge shaped space, indicate the week and year of manufacture.

This is very useful when making a decision as to whether to change a tyre or not especially if it has lots of tread left. Personally it would make me clench if I had to chuck away a tyre with plenty of tread but if the rubber is no longer able to grip the road then the date markings allow informed decisions to be made. If the bike is used for shows only then old tyres would be OK I guess but if you intend riding it you must decide for yourself. 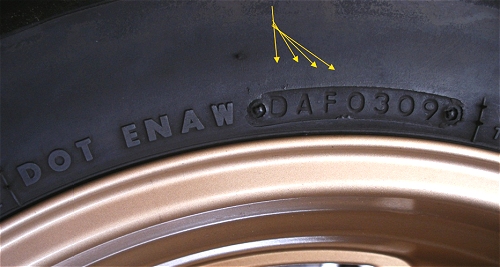 In this picture you can see that the numbers 0309 appear at the end of the DOT information. This tells us that the tyre was manufactured in week 3 of 2009. (Note: prior to year 2000 the year was denoted by one figure only, this being a number 1. A triangle after the number 1 denotes the decade 1990 to 1999). The date of manufacture coding is an obligatory requirement within Europe.

Check your tyres and see what they tell you. You may find a DOT brand on the tyre without the last digits so check the other side of the tyre, the DOT info less the date is often branded on both sides, and you should find the full information. This information also applies to cars, trucks and buses so it is very useful to know especially if you buy part worn tyres for your car. I am sure there is a shelf life for tyres and a point after which they should not be fitted, I think its five years but don’t quote me. Ultra violet light gets to the rubber and makes them less able to work as designed. 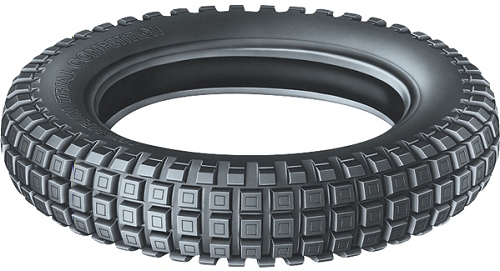 The Intricacies of Aging

You are right of course, there is an age limit. When I rode my oif T120R over from France (where I bought it) to Southampton, I came home via Vintage Tyre Services to get new tyres on. The old ones looked perfect but were new in about 1975.

I was alerted to the case of an MGB owner who bought some new old stock tyres from an autojumble. At moderate speed on the motorway one let go, the car rolled and he was killed, the passenger survived but with injuries. The police report at the inquest stated that the tyres were in excess of 20 years old. Another statement from the tyre manufacturers put the safe service life of a tyre at six years. Regular bike and car users will have worn their tyres down to the canvas by then but as the classic owner rarely gets that much use then the tyres never wear out. I’ve seen some awful examples, but what really saddens me is that owners are prepared not only to risk themselves but other road users too. This applies as much to the £100k E-type as it does to the £100 rattler. But do you know where the most neglect is? Trailers!

Most tyre retailers will only keep a tyre in their racks for a maximum of five years and some for only three years. After that they are removed and shredded along with the other used tyre casings. You are correct about the weather having an effect on the tyre. In the summer they become softer, in the winter hard and begin to wear quicker. Most people think a tyre looks OK most of the time, but if it’s aged then it is not.

I am impressed that Frank gets enough riding in one year to wear out a tyre even if he only rode one bike: Good on you! My two cents on the wear issues:

I was informed some years ago by my local tyre supply company that the shelf life of a modern tyre is approximately five years. That’s shelf life as in actually sitting on a shelf and not a sell-by date! Perhaps if the supplier’s shelf was in a very dark cellar it might increase the life of the said product a tad?

Wife Sue really could do with a new rear tyre on her Speed Twin which should be a 350×17. There is now not a tyre made of that size that is of good quality and suitable for all year round riding. Some time back I found the correct size rear tyre for her bike in a Kings Universal so sent for it by mail order, fingers crossed. I also ordered a Dunlop K70 350×19 for my Velocette at the same time. The supplier had wrapped the two tyres securely together and sent them to me. When they arrived it was clear by the indentation marks on them that they had been subjected to the weight of a heavy box on top of them in transit. What is frightening was that when unwrapping them, permanent damage was obvious. The Kings Universal remained completely distorted and looked like a triangular profile in four places! The Dunlop K70, however, regained its profile perfectly. I have a lifetime of experience in the motor trade but have never seen permanent distortion on a new tyre like this before.

So all those British Enfield singles and twins of the late 50s and early 60s as well as 5TA Triumphs that originally fitted 350×17 rear tyres are disadvantaged. You have a choice now of a good quality tyre of 325x17size, or fit a cheapie hard type that is only fit for dry weather riding. The 325×17 was originally specified for a lightweight Tiger Cub no less!

A friend of mine has changed his 5TA rims to 18-inch ones exactly because of this availability problem. There is a clearance problem though with that deeply valanced front mudguard. Any readers know of a source of quality 350×17 tyres? I would love to know!

Just like the rest of us, tyres deteriorate with age. Surprisingly quickly in fact – say five or six years depending on the compound, local climate and your tolerance for lack of grip.

Helpfully, amid all the other stampings and engravings on the sidewall, the date of manufacture is there for the eagle-eyed to discover. For instance, the obscure ‘DOT XXXXXX2703’ stamping means the tyre was manufactured in the 27th week of 2003). The date code was different pre-1999 but nobody would be riding on tyres that old… would they?

Tyres cannot be sold once they are a certain age, between two and three, and should be scrapped irrespective of use after six years, according to the DOT. I believe this as the secondhand wheels and tyres from a Mini I put on the trailer I pull behind the car managed about 15 yards before the sidewall split on one as I loaded the trailer. Plenty of tread but as flexible as a lump of plastic.

To help owners of classic bikes find the correct tyre for their machine, Vintage Tyres have produced a wall chart which covers popular sizes from popular marques. The poster also contains useful info on fitting and more details about tyre safety. It’s available free while stocks last: call 01590 612261 or email sales@vintagetyres.com to request a poster (say you saw the info on RealClassic.co.uk, please!) 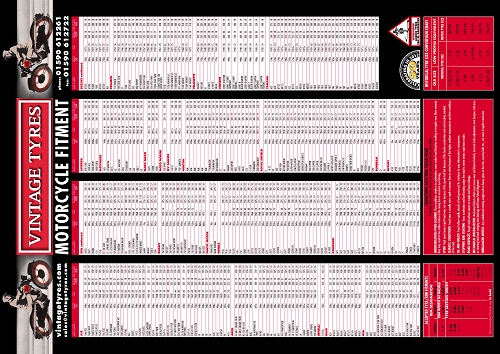