The merry month of May brings all sorts for classic bike enthusiasts: Phil Read MBE signing his autobiography; a two-stroke retro sidecar outfit; the toughest riding jeans in the universe; uprated electrics for Britbikes, and how to get on track at the Mallory Bike Bonanza…

If you desire three wheels on your wagon and are seeking traditional style, then F2 Motorcycles have just the job: their new Jawa Retro Sidecar Combination. This uses the current Jawa 350 Retro two-stroke motorcycle matched with a purpose-designed all-steel sidecar. The sidecar is mounted high and with very little axle lead, a set-up much loved back in the golden days of the sidecar. Back then bikes were relatively slow, so lightweight, low speed steering was more important than high speed straight line stability. Modern sidecars tend to be mounted lower and much further forward, but F2 wanted to recreate the feel as well as the look of yesteryear’s outfits.

The complete outfit costs £6195 OTR and ready to ride. See

Draggin Jeans has become the world’s first manufacturer of motorcycle jeans to be officially licensed to use DuPont„¢ Kevlar® aramid fibres. Originally developed in 1965, Kevlar® aramid fibre is lightweight and extraordinarily strong, with five times the strength of steel on an equal-weight basis.

Each pair of Draggin Jeans features a protective lining, knitted using a combination of DuPont Kevlar® and Dyneema® (the World’s Strongest Fibre„¢) and secured with heavy duty triple stitching in key impact areas, to help keep the wearer protected during a slide or fall. Soft, breathable, flexible and non-allergenic, the lining in Draggin Jeans offers superior protection to basic woven or knitted Kevlar® alternatives, surviving EU abrasion testing in key contact areas for 4.4 seconds. This is more than twice the duration of most other denim biker jeans with ‘protective’ aramid linings.

As part of the official partnership, Draggin will continue to work directly with DuPont„¢ to help develop the most effective ways to use aramid fibre in motorcycle jeans – the only manufacturer to do this.

Grant Mackintosh, founder of Draggin and a regular rider himself, says: ‘This is a big deal for Draggin, motorcyclists and the wider motorcycling community. We are concerned with the safety of motorcyclists and that is why we are proud to become an official licensee of DuPont„¢ Kevlar® fibre for our motorcycle jeans. For me this license is an important part of Draggin’s technical development, so I am excited about the steps forward we will make with the relationship with DuPont.’ See

Electrical specialist Paul Goff has new stock of a three-phase alternator stators, ideal for producing more power at low revs than the single phase versions. The three-phase items are available in 125W and 175W versions; both are interchangeable with the original Lucas single or three phase stators and compatible with the original Lucas rotors. These were fitted to the last 750 Bonnies but can be fitted to any bike post-1959 using the 74MM rotor 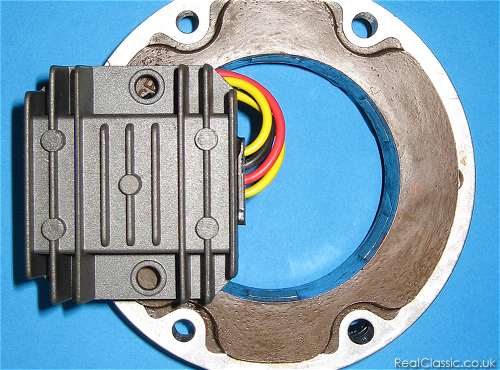 Both stators are £94.95 and supplied with the A Reg Three regulator/rectifier £134.90 plus delivery, all from 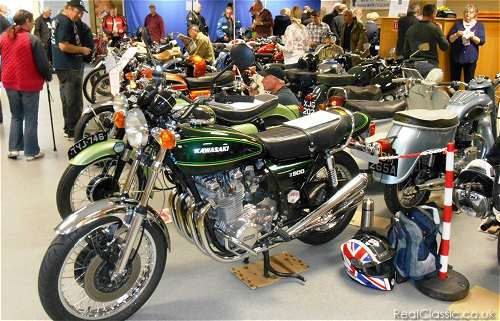 All Go at the Ashford Show

The Ashford Classic Motorcycle Show at Easter was another bumper event, with a full house of stalls in the autojumble and an extensive array of concours competitors putting on a great display of classic bikes. Phil Read MBE was kept busy all day signing copies of his new autobiography, ‘Rebel Read: The Prince of Speed’. The next Elk Promotions event is the Romney Marsh Bikejumble on Sunday 25th May 2014. See

The Mallory Bike Bonanza on July 11th to 13th 2014 promises something for everyone with static displays of the various owners clubs through to on-track action with parades for all types of machines, among them a MV Agusta being ridden by the legendary Giacomo Agostini. The Italian, winner of 15 world titles, makes a nostalgic return to the Leicestershire circuit where he was thwarted in his efforts to take the Race of the Year trophy for a third time by local hero John Cooper in 1971: an event which is still fondly remembered by the enthusiasts. Cooper will be re-united with Agostini on track in the special parades scheduled over the weekend.

Spectators will also be treated to the sight of Trevor Nation and Michael Dunlop aboard the Rotary Nortons, while James Westmoreland and three times British Superbike Champion Ryuichi Kiyonari ride Grand Prix bikes; Westmoreland will put a Ducati MotoGP machine through its paces while Kiyonari will be aboard a former Kenny Roberts 500GP Yamaha.

Members of the public will also take to the track able to enjoy lapping the circuit on Saturday, along with parades for all types of racing machines on Sunday. Around all of that will be a major autojumble, opening on Friday – ever popular for those seeking the elusive spares for their bike rebuilds – and owners’ club displays each giving the opportunity to chat and discover more about the club and the bikes.

Sporting action will centre on a classic trial while for those who want entertainment of a less taxing nature there will be chat-shows and live music on Friday and Saturday. Entries for track sessions cost £50 for the first one and then £30 for additional sessions. Spectator admission costs £10 on the Friday; £18 on Saturday and £22 on Sunday with weekend passes and camping available. See for entry forms and general info.