This month’s round-up of what’s occurring in the world of classic motorcycling – a Gold Wing selling for a song; SuperBikes on show, and how a Tiger Cub can see off a Speed Twin…

The bidding on old Brits was fairly ferocious at the Bonhams Banbury Run auction in June. Many desirable machines sold for far more than their original estimates… although when the estimate for a 1928 AJS 350 is only £1000, you can expect it to attract a fair bit of interest! That particular machine eventually went to a new home for £10,580. A selection of English trials bikes all fetched steady money; a 1961 Francis-Barnett 85 went for £1840, a trials Cub collected £2760 and the ex-Brian Povey James Commando, complete with plenty of history, sold at £3220.

The highest bid of the day was made on a 1907 NSU 460cc machine recently released from the Dover Transport Museum which went for £13,800. A handsome Ariel Square 4G came in a close second, at £13,225. But here at RC, our heads spun on their sockets somewhat when we saw that a 1978 Z1000A1, with 22,000 miles on its clock, sold for £1267. Next up came the bargain of the day, should you be seeking an original Wing to ride or restore. A 1979 Gold Wing showing 44,500 miles, and with an MoT into 2014, sold for just £287. No, we haven’t put the decimal point in the wrong place. This rather suggests that it might pay to stalk the lower end of auction lists for big old Jap brutes – especially when the sales are targeted at a specific audience like the vintage and veteran British motorcycle mob… 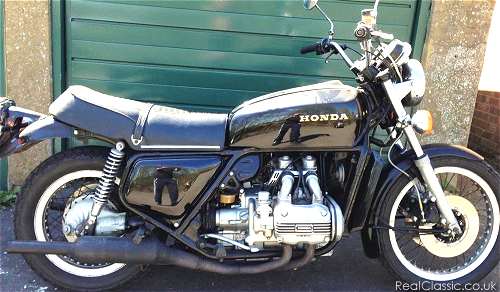 The next Bonhams motorcycle sale is at Beaulieu in September:

If you’d like to enter your classic bike into the South of England Superbike Show then hit the link below pronto, because entries close on 14th July 2013. Exhibitors benefit from FREE admission to the event plus a chance to win a nifty award – and the SuperBike Show caters for later classics from all around the world. If you have a particularly unusual, exotic or interesting motorcycle, then it doesn’t have to be ‘old’ in order to be admired at this event…

Early entries to the Show include an unrestored and totally original 1978 Kawasaki Z1R; a rare Aprilia Starck 6.5 Moto (which the owner charmingly admits is something of a Marmite machine); an extremely low mileage 1988 Suzuki GSX-R1100H, which has been stored for 18 years; a 1982 Yamaha RD350LC, recently restored by Stan Stephens, and a very original and low miles 1971 Yamaha 650cc XS1B. 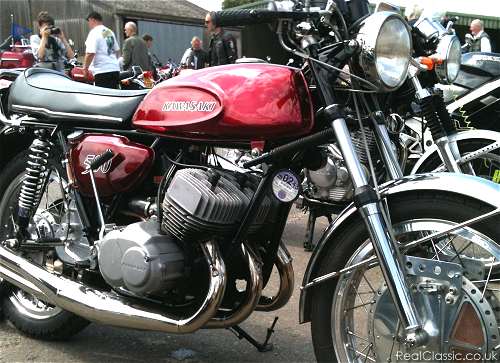 The SuperBike Show opens at 10am at the South of England Showground near Gatwick on Sunday 28th July 2013. The Show includes trade stands, bikejumble and a restoration section in addition to the private entries and club displays. Panther Publishing will be launching their latest book at the Show, ‘SuperBikes and the 70s’, which features photos from last year’s SuperBike Show. More books will be on offer from Graffito Books, who are promoting their fantastic new book of outside bike art, as well as motorcycle adventure author Gordon May.

Among the trade stands who have already confirmed are BHP Performance, who specialise in the manufacture of parts for Yamaha RD, H2C and Hinckley Triumph. They have entered their eye-catching Bonneville T100 CafÃ© Racer in the Show, with the custom parts, available to buy from them in the Robins Hall. You’ll also find plenty of tasty food on sale, free parking, and a helmet park run by the Royal British Legion. 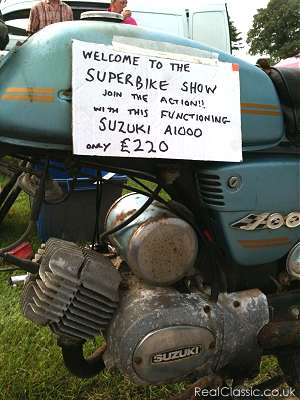 Best of all, RealClassic magazine subscribers can claim £1 off the standard admission price of £6 (please show your RC Club card when you pay). To enter your classic into the Show or get further details, see

Classic component specialist Wemoto and Motografix have teamed up to create a unique design of tankpad to celebrate the Isle of Man TT and Classic TT festival. Not entirely suitable for your 1949 Model 18, or even your 1969 Rocket 3, but just the job for that modern sports-tourer which cost more than most classics and deserves not to end up with a scuffed petrol tank. 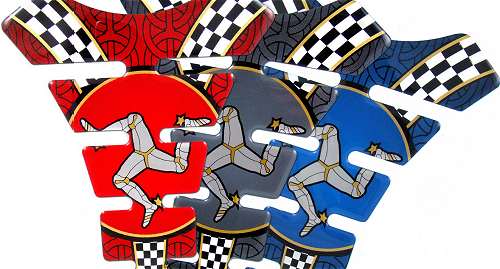 Motografix tank pads have been exceedingly popular, say Wemoto, due to the excellent quality compared to other aftermarket protectors. The sharp designs and bright, vivid colours are UV safe and don’t fade in sunlight and the protective 3D gel coating means that a Motografix tank pad will outlast cheaper pads on the market. Like all Motografix tank pads, the new Isle of Man design comes with a lifetime warranty. Motografix tank pads are made in the UK and many of the 500 designs are stocked at Wemoto ready for quick dispatch and delivery. The new designs are available in red, blue or black and retail at £19.99 from sales@wemoto.com or 01273 597072.

How accurately can you judge what speed you’re riding at? If you are one of those people who knows exactly what 55mph feels like, and can ride consistently at a specific speed, then you might just be a winner at the Thunderfest time trial which takes place on 15th September 2013 at Darley Moor in the Peak District.

‘The great joy of Thunderfest is that people who don’t normally win things get to stand on the top step of the podium’ says organiser Frank Melling, ‘because success is determined on how close you can ride to your target time. I set the fastest time of the day last year – and finished 11th!’ 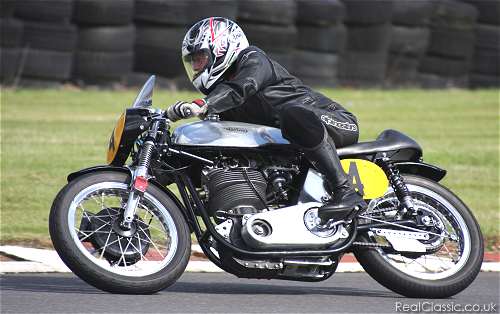 Thunderfest takes place alongside a general race day at Darley Moor but has its own classic paddock and scrutineer. Competitors in the classic time trial must enter machines made before 1978, and chose their target speed of between 50mph and 75mph. The winner will be the person who manages an average speed nearest to their declared target. Says Mr Melling; ‘Thunderfest winners are so skilful that they can achieve times within one hundredth of one mile an hour over 20 minutes of close-fought competition.’

Road bikes as well as race machines are welcome to take part – this is one competition where a Tiger Cub can see off a Speed Twin!

If you don’t fancy competing in the Thunderfest itself but would like to ride your old bike along to the event, then all classics are also invited to join the static display in the paddock next to the Thunderfest entrants, with souvenirs for display participants. Entrants to the classic bike display will get one vehicle admission pass and two free tickets. Contact 01928 740498 or info@thundersprint.com