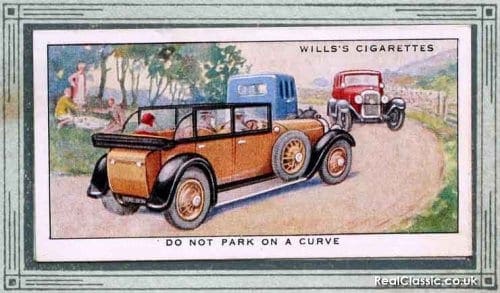 Many years ago, when almost everybody smoked, cigarette manufacturers would try to encourage brand loyalty by enclosing one or two picture cards in the packs. These came in sets of fifty so you had to smoke a lot of fags to get a set, and swapping duplicates was almost a national pastime.

1933 was a very bad year for road accidents in Britain. Questions were asked in the House. Something had to be done. The Government responded with several initiatives; they published the first Highway Code, which removed some of the guesswork; they introduced driving tests, and they created pedestrian crossings. Shortly after this Wills’s Cigarettes came out with a set of cigarette cards entitled ‘Safety First’. It is probable that more people studied the cigarette cards than bought a Highway Code.

Some time ago, I came across a complete set of ‘Safety First’ at an autojumble, and as the seller only wanted three quid for them, I snapped them up. The good news is they are now worth a lot more than I paid for them! At least a tenner. Sadly they are not in an original album, so I have no clue who the artist was; maybe the people who drew the cards were never acknowledged. I think they’re miniature works of art, even if you can see all the dots when you try to enlarge them.

Surprisingly, in the whole set of fifty, only four of the cards feature motorbikes. This is odd as a much higher percentage of road users were motorcycle mounted than today. And several of the cards are aimed at children; you can just imagine the concerned parent: ‘Ere you are, kids, ‘ave a look at this, save yer life it will, coff, coff, coff…’

And trams, there are lots of trams. But back to motorcycling. 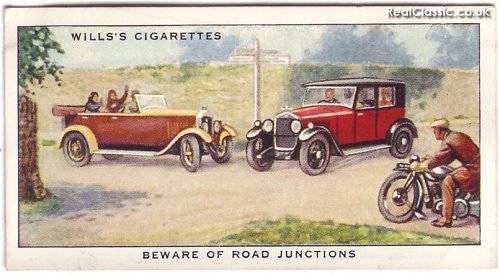 The first card in the series to show a motorbike is No.4: ‘Beware of road junctions’. It shows a motorcyclist at a crossroads, watching two cars about to collide. There are no road markings, which must have been fun, and one of the cars is clearly on the wrong side of the road. From the picture, it is difficult to see if the rider has actually come to a halt, or is trying to stop by using the traditional braking system of scraping a boot along the ground. You’ve never done that on an old motorbike? OK. 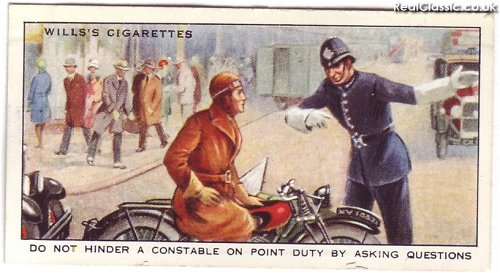 Card No.16: ‘Do not hinder a constable on point duty by asking questions’ is a real period piece. In this one the motorcyclist has stopped in the middle of a junction to chat to the policeman who is supposed to be directing the traffic. When did you last see a copper directing traffic, apart from around an accident? Not recently, I’d wager, and nor have I, except for one regular occasion. Every year the Surrey Constabulary send along a couple of officers to control the traffic at the start of the Pioneer Run, and they haven’t a clue. One year there were several near misses at the bottom of Tattenham Crescent and one year soon there will be a fatal accident. I went for a walk around the paddock as I couldn’t bear to watch. Policemen on point duty have been replaced by traffic lights, box junctions and mini-roundabouts, and none of these will answer questions. Especially mini-roundabouts; noted for their reticence, they are.

Incidentally, the rider depicted on this card is the only one who appears to be wearing a crash helmet. Either that or a very funny hat.

The 22nd card in the series is directed specifically at filterers. It is somewhat grandly entitled: ‘MOTOR CYCLISTS: Do Not Squeeze Through Traffic, particularly on the Near Side’. Quite right too, I say. The picture shows a couple of bikes, er, squeezing through traffic in a highly dangerous manner.

One of them is trying to get past a charabanc. Now there’s a vehicle you don’t see nowadays. They were a lot more fun than a bendy bus, even if the passengers did get wet in the rain and fall out occasionally. Of course, until recently, you could still fall out of a Routemaster, but almost all of them have gone now. 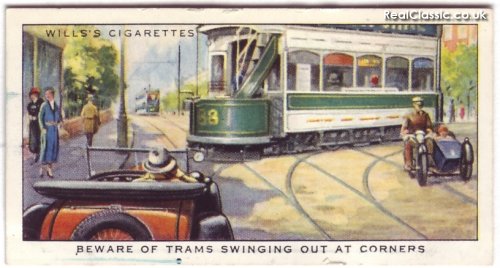 The last card to feature a motorcycle, No.28, is actually about trams. ‘Beware of trams swinging out at corners’, it says, and judging by the illustration this was sensible advice. Trams, the card warns us, have a lot of overhang, front and rear, and this can swing out and bop you one if you are not careful. The vehicle in question is making a right turn round the back of a motorcycle combination coming in the opposite direction. The outfit has nothing to do with the tram swinging out, in fact it doesn’t need to be there at all; the artist just needed to fill up a bit of space. And you can just make out that the lady in the sidecar is wearing a red hat, not unlike that worn by Ms H in an RC photo shoot. Wow!

Much of the advice given by the cards is still relevant today, even the bit about keeping out of tramlines, especially if you live in Croydon or Sheffield to name two cities which have re-introduced these vehicles. These boroughs are now high on my ‘Places to avoid’ list. Several of the drivers and policemen featured on the cards appear to have phantom arms, or are suffering from pins and needles. This is caused by demonstrating arm signals, rapidly becoming a lost art, except, of course, among the riders and drivers of vintage vehicles. And even they tend to fit winkers for safety reasons. Sensible, of course, but I think there might be a market for ‘QD’ or ‘Clip On’ indicators.

One might easily assume that card No.1 would give the basic advice ‘Keep to the left’, but this is actually No.3. In fact No.1 gives all the advice you really need to drive or ride safely. The caption is: ‘Drive as you would wish others to drive’.

Not such a bad idea, even today. 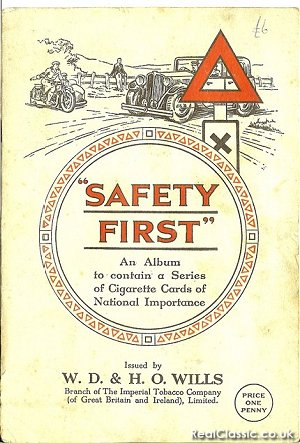