We all know one when we see one. They stand out. They gleam in an unnatural manner. Their paint is a yard deep, their chrome is more mirror-perfect than any mirror. The invisible insides of their engines are shinier that the outside of any engine we have ever owned ourselves. They are chequebook restorations; bikes built by skilled folk who are not the owner. Bikes where the only ownership skill involved has involved nothing more taxing than writing a cheque or making a bank transfer or two. Of course we sneer at these travesties; anyone with an ounce of sense and a ha’penn’orth of skill would do it themselves, would they not?

As you know, I try always and very hard to avoid causing offence. This means that I sneer behind folks’ backs rather than to their faces. Less noble maybe, certainly less potentially damaging. Who needs confrontation at our age? Quite so. Chequebook restoration? Pah.

The year of 2011 was interesting in many ways. I performed two complete motorcycle rebuilds, but I carried out only one of those myself. The other … this is coming-clean time … was a chequebook restoration. My first. And it was brilliant. Really. It was. It took almost no time at all, cost far less than I had anticipated and the motorcycle is better in every way than I could have hoped. On the other side of things, the bike I have completely restored myself is … well … it’s nearly finished. It may always be nearly finished. It took four or five times longer than I’d expected, cost three or four times more than I had planned, and although the result is a bike I could now actually ride I am almost scared to do so, such is my faith in my own spannerwork.

Both bikes were wrecks. I tackled the AJS wreck because it had sat in The Shed for about six years and I fancied the challenge. I approached my more technically skilled friends to see whether they could and would help with the bits I can’t do myself, and like friends everywhere they claimed delight with the idea. 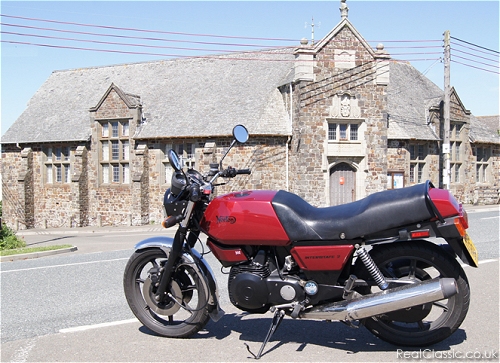 The Norton wreck had lain in a garden shed for maybe fifteen years and is of the rotary persuasion, so I felt entirely unconvinced that I could perform the technical tricks necessary to rebuild it. But… I acquired it because I had A Plan. The Plan involved taking a completely expired ex-police machine, as most of the air-cooled rotaries are, and constructing an un-faired civilian machine to exactly my own specification, including all of the modern enhanced mechanical and electrical systems which are now available for these most glorious machines.

The AJS Plan involved rebuilding a wrecked AJS back to functional condition, as close to stock as I could manage, and retaining as many of the original parts as possible. One of these plans was successful. That would be The Norton Plan, then.

I recognised that with the AJS I could rebuild everything apart from the engine, electrical bits and wheels by myself. Oh… someone else did the painting. The Norton, on the other hand, needed a lot of welding repairs to its sheet steel frame, as well as experience of foreign forks, wheels and the like, to say nothing of an intimate knowledge of how to make the thing work. I lack all of these. I have rebuilt several AJS twins over the years and the challenge of another appealed. I have never rebuilt a rotary Norton. Hmmm.

What, I mused, would be wrong with passing the entire rotorcycle to Richard Negus, noted expert in this field, with stern instructions regarding what I expected back. The bike was to be a special, built to my own spec, with everything done to it that I wish the factory had done in the first place. I mused more, and spoke with Richard at vast electronic length. I do believe that I entirely cured his insomnia.

While I was deliberating, another friend, the incredibly famous, skilful and talented Mr Les Emery, of Norvil fame, wondered why I wouldn’t let him rebuild my Commando. I could think of no excuse. And from that point madness set in. Two Nortons were dispatched to the frozen north (anywhere north of Exeter is frozen from my perspective) and returned, rebuilt, way beyond the quality I had asked for. I wrote a couple of remarkably painless cheques. I have two beautiful Nortons, both of them built to a spec I could never ever have achieved. I could get the hang of this.

My Norton riding miles throughout 2011 were divided between the two twins, the Commando and the rotary. Many many excellent miles. Both bikes are in fact brilliant.

Meanwhile… over in The Shed, I have finally finished wrestling with the AJS. One of the lessons of that rebuild related to spares parts supply. AMC parts supply is superb … but I still needed to know which parts to order, as not all are available and not all the allegedly substitutable parts will in fact fit. And some parts are, well, unavailable. Not many, wonderfully, but a few. Like the petrol tank. A minor detail, I agree, but handy. When there was a problem sorting Norton parts, I could shrug and my professional pals would sort the problem. When told of parts which would not fit … I could shrug some more, maybe even smile a little. There is an appeal to this. I could get used to this. 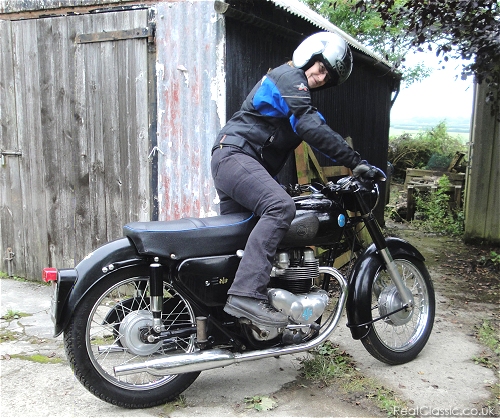 I am wondering whether, now it is legally back on the road, whether I will derive greater satisfaction from riding the AJS, being aware that it is mostly my own work? Or will I just worry, check my AA membership at every fuel stop and stick to local rides on it? Which would be a waste.

The new year will be interesting in many, many ways…