After running-in this traditional-but-modern motorcycle, Fiery Fred finds that his 750 boxer twin behaves almost exactly like a proper classic bike. The ‘Beemer with beansprouts’ has needed some fettling…

I bought the CJ new (see previous episodes) and we are now run-in (done in, in my case) and about to ring her neck, as it were.

I couldn’t stand the heel-and-toe gearchange any longer. So I took a look at the parts book and removed the side plate from the gearbox, expecting springs and whistling devices to exit in all directions — but lo and behold there were no horrible surprises here.

The only way to effectively alter the somewhat agricultural lever, which is welded to the shaft, was to cut it and shut it, remove the pedal plate and replace it with a peg. So that’s what happened, converting it into a more conventional toe operated device.

Once I’d reassembled the selector on the plate, it would not fit back on to the gearbox casing (well it wouldn’t, would it!). Judicious use of the smaller relative of Thor, King of Hammers, was brought in to play and all was well again.

Changing gear is now more of a pleasure than before but still causes some crunching noises… Could it be me? At least now you don’t have to lift your leg up under your chin to change down a cog! There has been a tendency to drop out of third gear a few times, particularly on the over-run, but reference to the owner’s manual shows that this is perfectly normal, and externally adjustable selector screws have been provided for this very eventuality. (‘If gear jump out upwards, turning stop nut in more turn with screwdriver’). If all else fails you can ask at your local takeaway for language help!

I can honestly say I have never smelled, or seen any used oil like that drained from the Chang, on changing all the lube for Castrol Classic 40W. As you all know (?); Chang Jiang translated literally means ‘Long River’ and that is where this oil probably came from — a long greasy, brown, smelly river or at least that was how it seemed! 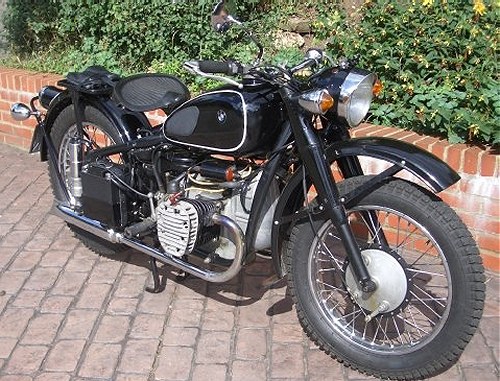 Other slight problems have arisen. One time, when on a wrinkly run around Herts, Beds and Bucks, I applied the front brake gently whilst going down a 1-in-10 hill with some very tight bends with reverse cambers on. The bike weaved horribly from side to side! At the tea / sporran stop, an investigation revealed the lower fork yoke pinch bolts were quite loose which had allowed the tubes to twist. This was swiftly remedied (and has since been thread locked).

There is no perceptible vibration (more of a surging, throbbing, undulating sort of a feeling) from the Chang. The engine has settled down to a pleasant chuffing sensation, much like a steam engine. The tickover is unbelievable; ‘gently swaying from cylinder to cylinder’ to quote Mr Toast. I have fitted the larger, finned alloy sump to the engine, which gives you another 1 ½ pints of oil, along with the higher capacity oil pump. Why? Just because I could really! They were very reasonably priced and seemed a good option to have, with earth-shattering performance such as this!

Being a BMW-styled boxer twin, the cylinders do hang out in the breeze. Even so, being a side valve, they can still get very warm on a hot day. Of course in colder weather the obvious advantage is that your feet stay very comfortable but I would not advise riding in sandals (or even trainers), and watch out for your shins when putting your feet down if you are not wearing long boots!

Whilst researching the Chang on a couple of US sites I discovered that one of the reasons for the inherent overheating of these engines is due to weak fuel mixture problems. These can be cured by ensuring that the main jets are actually the size they should be. On checking my jets I found that rather than the 1.0mm they should be they were 0.7mm and so I did duly enlarge them by judicious use of a lathe. What a transformation that has made! Better response and a smoother motor and certainly cooler running.

Another niggle that I have had is that there is no indicator warning light and I felt that an audible warning would be advantageous as I probably wouldn’t see the light anyway. On a trip to Maplins (no, not the holiday camp of Hi De Hi fame) Electronics I bought two 12-volt buzzers for around £1.99 each and installed them inside the headlamp shell in each indicator circuit. This works a treat and now I cannot forget and leave my flashers on! Well, I can but I get this strange noise buzzing in my ears… 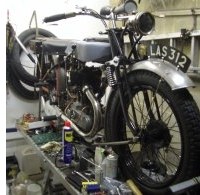 It has been said that the castings, particularly the cylinder heads, look as though they have been carved out of grey mud and this is quite true. It has also been suggested that a day’s work with a flexible shaft and some abrasive tips would produce a more pleasant effect. Personally (and this is not because I am too lazy to do the work, it’s just that there is an ancient AJS calling from the ramp), I do not feel inclined to alter the appearance. I think that it all adds to the slightly quirky charm of this ‘old machine’ (that’s my excuse anyway).

On the subject of tyres… bear in mind that these machines were originally intended for military / sidecar use and are still fitted with what can only be described as the sort of tyre that your Grandad (or me for that matter) had on his ‘sit up and beg’ Ford Popular. These tyres are 375 x 19 sort of crossply but they give the impression of being much wider and are very flat in section. If you can imagine an Avon SM then you are somewhere near the mark but these are much less flexible. They have a very acute edge which does not in any way encourage the bike being enthusiastically cranked over without resultant underpants problems.

The brakes are not that bad if you accept that, in solo form, the bike weighs around 450lbs and with me on. They’re as acceptable as the brakes on any ‘real’ mid-1930’s machine would be. Anyway, the performance (22/24hp: wow!) is in line with the stopping capability, so long as you plan well ahead.

The power, if that is what you can call it, of this 750cc machine is tremendous. It will pull a house down, or me up my very steep drive, but is such that it will top out at around 60mph and does not like high or sustained revs. It is however a very flexible engine and, once in fourth gear, will chug along merrily all day unless you have to stop or really slow down much. It is possible to change the final drive assembly, at around £180 which will increase top speed somewhat

I was dubious about the rubber seat, not being that sort of fetishist! It may well have distinct advantages in the rain and even now leaves the garage smelling like a tyre factory, but is extremely comfortable for those who are challenged in the rear end department and is no problem at all on a 100 mile-plus run. On deeply potholed roads (of which there are so few in the UK!) there is a tendency for the large spring shock absorbing thingy on the seat to bottom out (excuse the pun), but that is probably because of my bulk as I have adjusted it as far as it will go. If one rises to the occasion then there is no real problem!

It has been impossible to stop the original petrol tap leaking and another tip gleaned from the internet was to fit a Honda tap with the correct 16mm x 1.5 pitch thread which has solved that problem. It was a bargain eBay purchase for about a tenner.

The silencers have large threaded nuts compressing them on to the very small diameter pipes and, of course, these have come loose — as have the footrest mounting stud bolts and those yoke pinch bolts, fork bushes and front wheel spindle. This confirms that these CJs are really old bikes reincarnated and need regular fettling to keep them up to scratch. Personally I actually like a bit of spanner work and feel that this is all part of being one with your bike. It’s also a good excuse to spend hours in the shed next to the ‘sporran’ repository. Only for medicinal purposes of course!

Sending pictures in to RealClassic? Make sure that they are *at least* 500 pixels wide, and ideally much bigger; 1280*960 would be nice. If in doubt, ask. Although villains on films can zoom in on the lapel stitching of James Bond’s suit when photographing him from a satellite, in the real world we can’t make small digital images bigger without also making them look rubbish. RM.