Richard Jones goes browsing through the classic bikes on offer at Pembrokeshire Classics in south Wales. He encounters a couple of Villiers two-strokes, an Ariel Arrow, a really rare Laverda Jarama and even a Beezer bobber…

Mrs Jones and I decided that a short holiday was in order and decided to go to the land of the gods. Rather than choosing the north end of the principality, we opted for the far south west and Pembrokeshire. Although it doesn’t have the mountains, south-west Wales does have a fabulous coastline (and there will be some photos of this on if you’re interested).

Pembrokeshire is also – unsurprisingly – the home of Pembrokeshire Classics which is owned and run by father-and-son team, Anthony and Alistair Devall. In case you think I deceived Mrs Jones in any way that this was the true reason for the trip then shame upon you – she was well aware and consented to me disappearing in return for several hours of spa treatment and afternoon tea at one of Saundersfoot’s hotels. What a star she is.

As you will see Pembrokeshire Classics, which is situated in fantastic rural surroundings just outside the village of Narberth, is an Aladdin’s cave of classic machinery, automobilia, model aeroplanes and also surfboards which are, along with bikes, Alistair’s passion. The hospitality, help and patience I received from him and Anthony was second to none – they even brought in coffee and a proper mug for me when they knew I was coming, and it doesn’t get better than that. 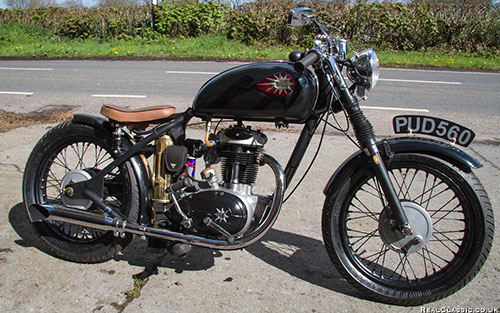 This BSA C15 based bobber had been sold and was waiting to be picked up when I visited. It’s that time of year when classic motorcyclists’ thoughts turn to a new machine and stock is moving fast. The machine had been bought as a straightforward C15 from Anthony by a gentlemen who restored Minis, but was recovering from an illness and wanted something to do to keep his hand in. This was his first bike project and sometime later he returned it in its present customised form. He should give up the Minis and focus on bikes, as this little wonder looked like a whole lot of fun.

By contrast this 1963 Francis-Barnett Cruiser 89 was still available at the time of my visit. The marque introduced the Cruiser model in the first week of 1933, and its two-stroke 248cc engine came with a full enclosure and a different form of frame – a forging, channel sections, flitch plates tubes and stays together with an undershield for bracing. Large valanced mudguards and legshields were provided to keep the rider clean and tidy. By the time this example was built the legshields had gone, the enclosures all but gone but the big mudguards still remained. The 248cc engine was also retained and is the Villiers 2T unit driving through a four-speed gearbox. The machine was intended for touring duties and is certainly eye-catching with its yellow paintwork. Sadly F-B disappeared three years after it was manufactured, which is somewhat sad given the firm’s reputation for building reliable utility motorcycles. 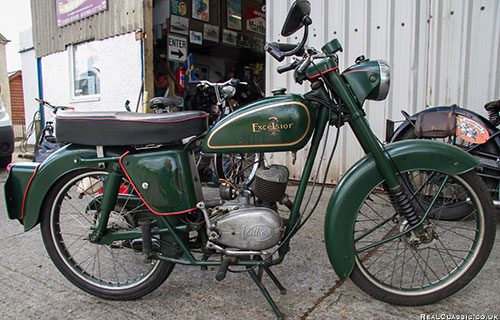 Anthony and Alistair acquired another two-stroke Villiers engined machine, an Excelsior Consort CA8 with a 98cc power plant, at this April’s Stafford Show. This model appeared in 1958 when it replaced the previous F-series and it came with a more up to date design featuring a telescopic front fork and swinging arm frame. Alistair, who is something of a fettling supremo, felt that this example may need some work on the gearbox but that it was – overall – a good addition to the stocklist. 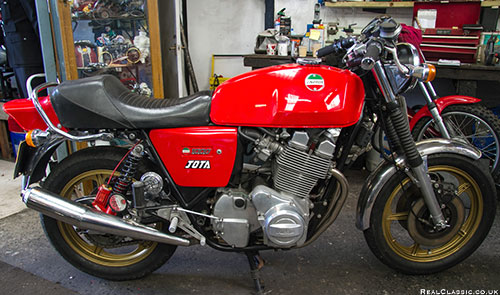 Now for something bigger, red and Italian. Although it says Jota on the sidepanel, this is a replica of the Slater Bros icon and is, in fact, a 1981 Laverda 3CL Jarama, a model introduced with some lack of success in the USA although a number did come to the UK. Here there seems to have been a tendency to turn them into Jotas but let’s be honest – these seem to have become almost synonymous with Laverda while Jarama, the name of a Spanish circuit near Madrid, is not a name you often hear. If I was the new owner I would be looking for side panels with ‘Jarama’ emblazoned on them to get some exclusivity for my new machine. 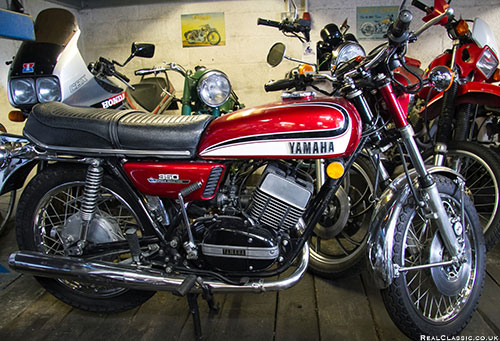 Anthony and Alistair also cater for enthusiasts of machines from the Land of the Rising Sun although they know these people want something that is very good and very original. This Yamaha RD350 350cc from 1973, the first year of this popular model’s production run, with torque injection should fit the bill nicely. It was imported from the USA last year and its condition suggests that it came from one of the warmer states where rust is not such an issue. The two-stroke, parallel twin cylinder engine comes with reed valves, a six-speed gearbox and a front disc brake; at its inception it was said to be capable of 102mph although, as it’s now a classic, a careful owner may not want to see if this was accurate… 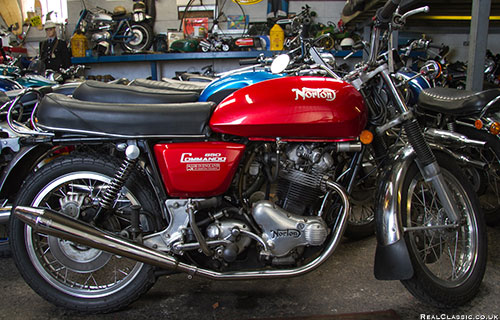 Of course there were Nortons on show and I’ve chosen this one – a Mk3 850 Commando from 1975 which, rather strangely, comes without the accustomed electric start and hence the absence of ‘Electric Start’ on the side panel. Apparently a small number of these machines had the electric boot omitted. I’m always in two minds about the Commando – I lusted after one at the age of 16 but as Bert Hopwood’s design goes back to 1947 you do wonder what you’re getting apart from the undeniable aesthetic appeal. 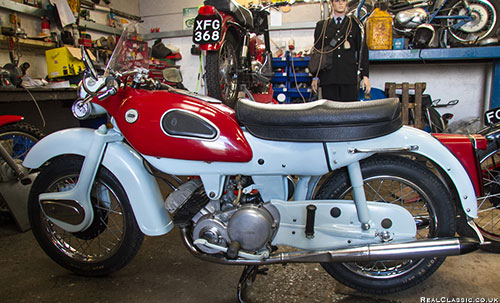 You can’t help but like Ariel Arrows, particularly when they have a paint job as colourful as this one from 1962, which is said to ride as if new. Its forerunner, the Leader, appeared in 1958 and was a Val Page design which featured a pressed steel frame with legshields, full enclosure and windscreen and which housed a 247cc twin cylinder two-stroke engine with cast iron barrels and alloy heads. The trailing link front suspension had its units and arms concealed in fork pressings and both wheels had light-alloy, full width hubs with 16-inch rims. Although innovative for its time the Leader was reasonably successful and, emboldened by this, Ariel produced the Arrow in 1960, a sports version which abandoned most of the enclosure but kept the rest of the Leader. Page did have idea for taking his concept further, including a 700cc four-stroke in-line 4 cylinder tourer a la BMW K-Series but, as we know, it all came to nought. 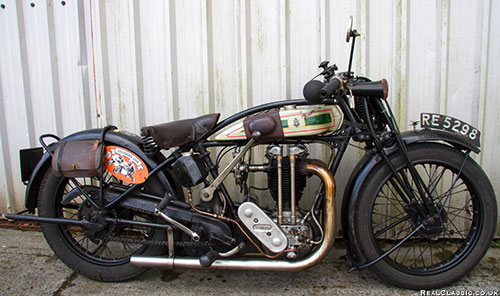 One of the advantages of owning a classic motorcycle business is that you can find and retain some splendid machines for yourself. This is Anthony’s 500cc 1927 Triumph Twin-Port TT OHV which he uses regularly and is, it has to be said, a very fine looking machine. 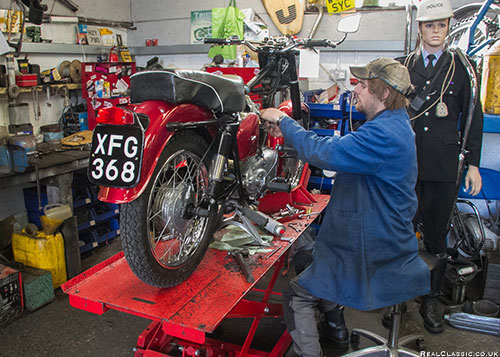 Finally a photo of something that made me realise I can never be a true classic bike owner. Anthony was adjusting the valve openings on one of the two Royal Enfield Crusader sports in stock under the watchful gaze of a very quiet policemen. Although he patiently explained what he was doing and how he was doing it I have to admit I failed to grasp the principle. Now I am a couple of hundred miles away I can admit that I was seriously interested in the other Crusader but I’m afraid I would never be able to do it justice. Apart from filling the petrol tank and changing the oil I would be quite unable to do much else – sigh!

I’d strongly recommend a visit to see Anthony and Alistair. I’m sure you will be welcomed even if you don’t intend to buy, although I’d challenge you to walk away from all that machinery without being seriously tempted. If you’re concerned about getting your newly acquired machine from Pembrokeshire to home then never fear. Anthony uses a courier firm called 2wheeltrans for all his deliveries, a decision based on a consistent, good value quality service. Tracey and Chris have a small fleet of Mercedes vans with full width ramps and only carry a maximum of four bikes at a time; their drivers also all have full motorcycle licenses so that they know how much your new P&J means to you and treat it accordingly.

If you need an excuse to visit the area then local VMCC are running the 60th Saundersfoot Run over the 19th and 20th of September () and hopefully I will see you there.