BikerBabe has spent quite a while getting her Bultaco trailbike fettled and ready for some winter mud-plugging. So, naturally, it refused to play fair at the first sight of snow…

I guess it’s that time of year again. Time for BB to get the Bulto out, make some muddy tracks all over the place, and tell the world about it. This trip actually started last summer, when I heard suspicious noises emanating from the engine during the kicking stage of starting. The sounds in question were akin to a soft whisper, someone holding a finger to their lips, and saying ‘shhhh’ when I tried to fire it up.

Suggestions from people in the know threw up a couple of common thoughts: a leaky gasket or something to do with the exhaust. There has been a small leak around the join between exhaust pipe and engine since I got the bike, but I was sure that wasn’t the culprit. It’s a tricky operation pushing the lever down, and at the same time, reaching over and around to the front of the bike to stick a hand over what is actually quite a large gap. It also proved a fruitless one, so maybe that’s not really a gap but an optical illusion.

Doing things in order of easiness, the next option was that it might be the sealing ring on the spark plug, seeing as it had a thick layer of muck and grit under it. Carefully cleaning it all off so the bits didn’t fall into the inner sanctum, and firmly but gently tightening the plug made no difference. I couldn’t feel any air swishing out of joint between the head and cylinder but just to be certain I took a spanner to the head bolts and gave them all a wee tweak, which wasn’t as easy as it sounds due to some fool positioning one right under the exhaust pipe.

Glory be, the noise disappeared.

Now, it might sound to you inexperienced mechanics out there that this procedure only took a few hours, or a day at the most, but it did in fact take in the region of a couple of weeks. One can’t rush these things, you know.

The good news was that, while I had been noise hunting, my front wheel was being expertly rebuilt by a chap named Bob. Yet again, it seems like such an easy task to buy some spokes and let him do the business, but the saga of those spokes is a tale fit for a long, long evening.

The first lot I ordered didn’t arrive at all, so I phoned to check their whereabouts and it turned out some other soul of the same initials elsewhere in Scotland had received them. Set two arrived, but only in part, so another phone call and a couple of emails eventually resulted in the missing lucky 13 landing on the doormat. A work trip to Dalkeith for a few days put paid to any ideas of getting the spokes to Bob ASAP, and when he did get them he wasn’t impressed with the quality. 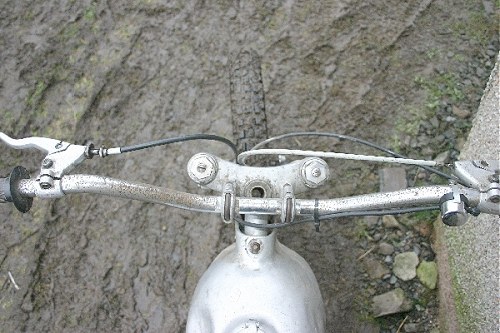 I was quite excited to have a true wheel for the first time since buying the Bulto, as I could now utilise the front mudguard without it taking chunks out of the wall of the tyre. Fitting the wheel was easy; getting the brake hooked up was not. Somehow it just didn’t seem to work, and neither did the rear one, which had been fine before all this. Knocking the bike off the stand and snapping the end of the clutch lever off was also a piece of cake. Still, a couple of minor inconveniences weren’t about to stop me trying out the new wheel.

The carb was treated to a clean out as it hadn’t been drained when the bike became wheeless, and a fresh dose of BP’s finest was mixed with some of Shell’s black gold, given a vigorous shake and most of it went in the tank. A couple of kicks later it was sounding like its good old self so, thought I, let’s go to the woods and see where those nasty men have been chopping our trees down. The Forestry Commission have recently been clear-felling the shelter belt all around us and have laid a new road to enable the hauling out of large loads of timber, but as yet, I hadn’t had time to inspect their work. 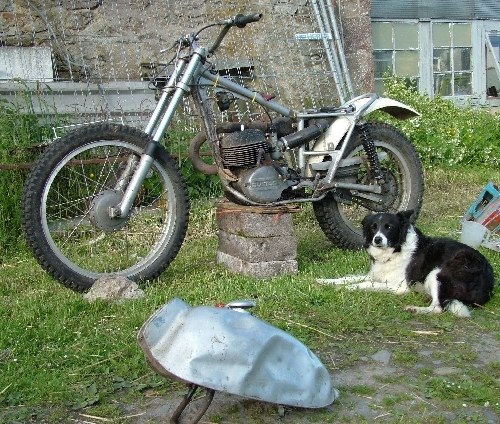 Darkness was looming, as was the next blizzard. Both hit at just about the same time as I plunged off the end of the new road into knee high mud. I guesstimated the old track would be somewhere close, and headed for it. In the gloom, I missed my turning, the only way out of the bog, and slowly ground to a halt.

Things became a little difficult from here on in, particularly because I had two choices: lift one foot from the glue, or lift the back of the bike up in an effort to swing it around. It really would have been better had I been able to do both because I couldn’t stand far enough away from the bike to give me any room to swing it to. I began to make progress however, and just about got it facing the way out, so hopped on to fire it up.

Alas, the kickstart had chosen that very moment in time to lose its grip on the shaft. Showing up at home without the bike and covered in snow and mud received a bit of laughter but not as much as I expected. We threw a rope and a few spanners in the van, and my dear old Mother came to the rescue. It was too dark to fix the kicker, and the rope too short until we struggled to wiggle the bike a bit further.

Did I mention it was up a hill and the rear wheel had locked up with ice and stones?

By some heavenly means we finally pulled the Bulto to dry land. Of course, I couldn’t ride it back so it had to be slung in the van. No easy task in the pitch dark. For the next few days my body felt like it had just hauled a tank out of a peat bog. 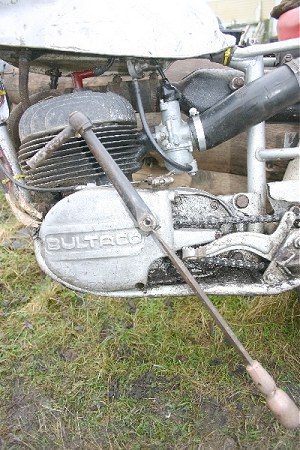 The locked rear wheel cured itself when the ice melted, but the chain looks a bit saggy, and the kickstart is, I fear, destined to become modern art. Last winter I bodged it with a strip of tin can, this year I only had mince pie tin available which despite folding until it was the required thickness, didn’t really do the job. I’m not sure if it’s a recognised technique to use my paint tin opening screwdriver to force the lever open enough to then be able to tap it off the shaft – gently of course, but it was the only method that worked. 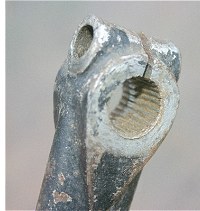 On closer inspection, the splines that link up with the ones on the shaft are practically non-existent, so I think a new one is on the cards for the princely sum of £40. The good news is the wheel held up, even if the whole front end is now a little squiffy. Apparently I need to ‘bounce it’, but that involves slackening all the bolts off and applying the front brake, before rotating the whole caboodle back to where it should be. Looks like the next lot of fettling will have to start with sorting the anchors. Mind you, if the new kick-start arrives before I get round to the brakes, I could just try it out first…