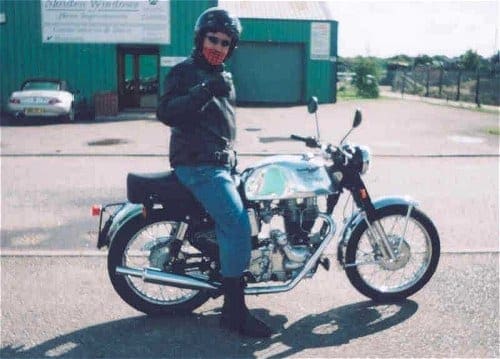 After taking a test ride on a new Bullet Andy C just had to own one. So did the reality live up to the dream?

I really wanted a 5-speed electric start Clubmans but, as I said in the previous episode, no such animal exists (at least not directly from Watsonian). I was offered such a good deal on a new 4-speed Clubmans with electric start I couldn’t refuse and just one month later I picked it up.

As I rode out of the Bike Centre after collecting the bike, and headed homeward some of my elation evaporated. The reason was that just about everything was overtaking me, even some spotty-faced oik on a bloody 125. As I quickly learned, one of the main reasons for this is that the RE speedometer reads 10mph faster than you are actually going. So whilst I thought I was religiously sticking to the running-in speeds (more of that later) I was actually doing 10mph slower!

So one of the first modifications to the bike was to fit a digital bicycle speedometer, something that a lot of Indian Bullet owners do, I am told. By the way, if you fit one of these speedos, don’t use one of the radio operated ones, use a hardwired one.

The running-in speeds quoted in the manual are well, er, bloody slow. I was recommended by the dealer to run the bike in sensibly, which means not letting the engine labour, not revving it hard, not holding high speeds for extended periods. In other words use a bit of common sense. It seems that if you stick to the very low running-in speeds recommended by the manual it can cause more harm than good.

For the first part of running-in, I varied the speed to around 45/50mph, and not letting the bike labour. After the first 300km service I took it up to 55/60mph. When I had the service done, I took the opportunity to have a one-tooth larger gearbox sprocket fitted. This has the effect of adding around 7mph to cruising and top speed. This is a mod that many owners do, and I thoroughly recommend it.

The winter months came too soon, and over winter I made a few changes to the bike — nothing that I thought would invalidate the warranty, well at least nothing that I was going to let Watsonian or the Bike Centre know about – harrumph!

These changes amounted to fitting high capacity oil pumps, 30mm MK2 Amal carbs, samrat rockers (much lighter than the standard items), and replacing much of the really naff zinc-plated spacers that Watsonian use on the Clubmans, with some home manufactured stainless steel items. I really think that Watsonian should pay a little more attention to detail and use stainless spacers and fixings, the zinc-plated ones look really cheap and nasty, but than again I guess that they are just trying to keep costs down.

Having said that, there really is no excuse for the seat fixings being way out of position. I had to re-drill the seat with the fixings in the correct position, and come up with some rather natty homemade nylon shoulder washers to disguise the fact that the holes were incorrectly drilled in the first place. Come on Watsonian — all you need to do is spot through the fixing holes from inside and in under the seat!

I also replaced many of the naff plated Indian nuts and bolts with stainless steel items, and one other thing; I also relocated the horn to just under the fuel tank, on a home fabricated stainless steel bracket. Most of the Indian nuts and washers are made from a really inferior grade of steel that has a consistency more like chewing gum. You have to accept that is part of the reason why these bikes are so cheap.

With the coming of spring, the bike was brought back out onto the road in early April. The only real problem that I had was tuning in the 30mm Amal. It took me just over a month of trying various combinations of jets, slides and needles to get it running properly (so thanks to Stuart of Stuart Motorcycles down in Somerset for your patience).

Having tuned in the Amal, I am happy to say that it gives a noticeable improvement in performance. It has improved the bike to the point where it occasionally suffers from clutch slip. The fuel economy still remains around 65 to 70mpg though. 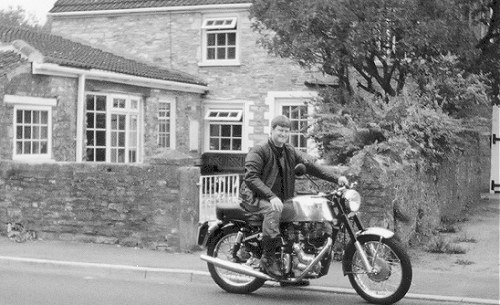 The bike has now done in excess of 4000km (2480 odd miles), and has been thoroughly reliable over that time. It has remained easy to start, although the electric start only engages about 75% of the time, and it has used hardly any oil. I believe that the problem with the leccy start can be remedied as there is a known problem with it. I could probably have had it repaired under warranty, but couldn’t be bothered.

My normal cruising speed is around 60mph with the occasional burst up to 70 for short periods. When I was tuning the carb in and doing flat-out plug chops, I was seeing a top speed around the 85 mark on the digital speedo (the standard RE speedo by then was going berserk!) but there is no way that you would want to hold it at that speed for any length of time, unless you are some kind of mechanical masochist.

After a year’s riding I have the confidence to ride the bike to its limits and I find that I really need to upgrade the brakes. I will probably fit Hitchcocks’ British linings which I have seen some good reports on. I would also like to get a little more power from the motor without having to spend a whole load of cash on it, or ruin the reliability I have come to enjoy.

The standard bottom end can cope with a slightly higher compression ratio than the standard 6.5:1 (or thereabouts), and there are many sources of performance parts out there. If you really want to you can go for the Hitchcocks’ 612cc conversion, or if you want to be really extreme the Tollgate Classics 750cc conversion. You pay yer money (a lot of it) and take your choice.

I have read reports that with the 612 conversion you have the potential for 80mph cruising, and around 115mph top end, and enough performance to surprise our plastic rocket owning friends [Hmmm… RealMart].

Personally I enjoy the mild manners that the bike has, and I don’t want to tune the bike to the point of it being harsh. I will probably just up the compression ratio a little, flow the head, and fit some wilder cams. All I want is a little more acceleration. Top end speed is not my particular quest. I also intend fitting the close ratio gear cluster, as those ratios are just a little bit to widely spaced.

The handling is nowhere near as good as my Trident, but having said that I have scraped my boots on several occasions on roundabouts without having to try that hard. The handling is probably best described as ‘firm’. I have read some good reports on the softer fork springs that Hitchcocks can supply, and may well consider fitting some in the future.

Hitchcocks are well worth another mention here as they have taken a lot of time and effort to reply to my (sometimes) very lengthy emails, and telephone conversations, and I would thoroughly recommend them to anyone who owns a Bullet.

If you buy one of these bikes, be prepared to be accosted by people from all walks of life who have either had one of them, or whose Dad owned one, or used to know someone who had one. Most of the fellow Bullet owners that I have come across are down to earth guys. The majority of them have nothing but praise for the bike, and accept their shortcomings, whilst many of them have covered huge mileages on these bikes with no problems.

Don’t believe everything that you hear on the negative side of these bikes; likewise there are also some tall stories doing the rounds. After 2400-odd trouble free miles, I am very happy with mine. If you don’t mind spending some time spannering on a bike that is not particularly quick, and is relatively inexpensive, but gives good fuel economy, and seem reliable enough, you ought to consider one.

If you want a Bullet that stands out from the crowd, pay a lot more and go for the Clubmans. If you want the Clubmans look but want to pay a lot less, buy a cheap secondhand Bullet (they do not hold their value), and fit the Clubmans kit from Hitchcocks. In retrospect I would probably have taken this option had I known about it at the time 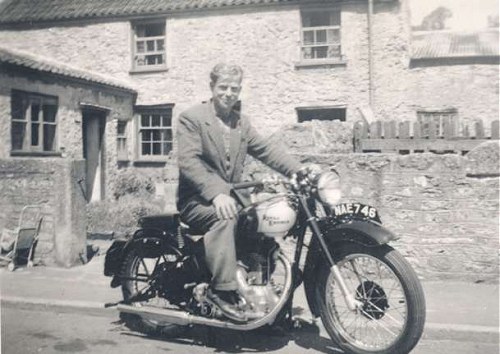 As a footnote to this story, I found out an old photo of my late Dad, taken some time around the early 50s (I think) aboard an Enfield. The photo of me further up the page was taken in the same spot this year. Look at the pictures, a lot of things have changed a bit, but compare the engines cases of the two bikes. Not a lot has changed in 50 odd years; maybe that is part of the charm of owning one of these bikes.