Andy C wanted a traditional British single, and found himself leaning towards Enfield’s Clubman GT. Or did he really want a Sixty-5?

I have reached an age where I no longer have the urge to travel at high speed all the time, and really do enjoy cruising at much more sedate speeds than I did in my youth. I still own a Triumph T160 Trident, which provides me with more than adequate performance when I feel the urge to get somewhere quickly, as well as having that beautiful triple sound that sends tingles up your spine.

Of the all the motorcycles ever made, British are still nearest my heart, and I would have loved to have bought an old British-built single, a Gold Star, and –should I ever win the lottery — a Manx. The appeal of a single should be obvious to any Brit bike fan, the sound, the laid back torquey engine, ease of maintenance, good fuel economy, the list goes on.

The only problem is that you can easily buy yourself something from an unscrupulous vendor (and there a few too many of those around) which will give you nothing but grief, and could take an age and large amounts of money to sort out.

So I ended up seriously considering the Enfield Bullet. It doesn’t have the charisma or performance of a Goldie, but it is ostensibly still a British 500 single of 50’s vintage, albeit made in India, and it comes with a year’s warranty (if you buy a new one).

The summer of 2003 saw me taking a ride on my Trident up to Watsonian Squire (the official UK RE Importers) to test ride the Clubmans, and whatever other model I could lay my hands on. It was a beautiful summer day, and after finding Watsonians (not particularly easy), I was greeted to the sight of a couple of rows of Enfields being prepared for delivery.

One thing that I immediately noticed was how the Clubmans stood out from the other Enfields, that big alloy tank glinting in the sunshine, and when it was started that beautiful unrestricted exhaust note. I climbed off the Trident (hands feeling numb after the 120 odd mile journey), and was instantly greeted by one of the Watsonian guys (sorry I didn’t get your name!).

I chatted for a while before getting my leg over (the bike!). I was told that the bike was absolutely bog standard apart from the Clubmans regalia. I cannot remember just how many miles were on the clock, but I was pleased to see the absence of any kind of oil leak.

The guy from Watsonian kicked the bike into life (first kick). It immediately settled down to a smooth steady idle. As I put my gear on, he blipped the throttle a couple of times. The exhaust note was superb, the Goldie pipe twittering… well… just like a Goldie. I was going to enjoy this. As I climbed aboard the last word of advice from the Watsonian guy was to be careful of the brakes – more of that later.

I rode off towards the main road with a huge grin on my face. The bike fitted me like a glove, it sounded good. Then came the first disappointment; I kept missing the gears. Then the second, the brakes didn’t seem to do a lot!

I was told to take as long as I liked over the road test, so I did. I covered around 30 or so miles, even stopping a few times to see how the bike started when hot, which it did, without fail. As I put on more miles I became accustomed to changing gear the Enfield way. This needs to be done slowly and positively. If you try to rush changes with the 4-speed box you WILL miss gears.

As I became more confident I started to push the bike, finding that it would reach 60mph with relative ease, and would hold 55/60 cruising. I couldn’t resist seeing what its top speed was, and managed to get around 75 out of it.

On the way back to Watsonian I encountered some people on horseback which meant that I had to slow down very quickly, not a pleasant experience. I was still going at a fair rate of knots when I overtook them – no doubt about it, the brakes were very poor.

I returned the bike to Watsonian in one piece, and retired to the cafÃ© just around the corner for some quiet moments of contemplation. If you ever visit Watsonian I recommend visiting the cafÃ© – it is just like the old transport cafÃ©s of yesteryear. Apart from the poor braking, and iffy gearchange I loved the bike, and started to think how I would raise the cash to buy one, the 5TA would have to go for a start.

When I learned that there was also an electric start option, and a 5 speed version, with a gearbox that was a vast improvement over the old 4-speed one, my mind was all but made up: I had to have one. As any of you RE aficionados out there will know, Watsonian do not do a 5-speed version of the Clubmans – shame on you, you should – but it is possible to order an electric start Clubmans. 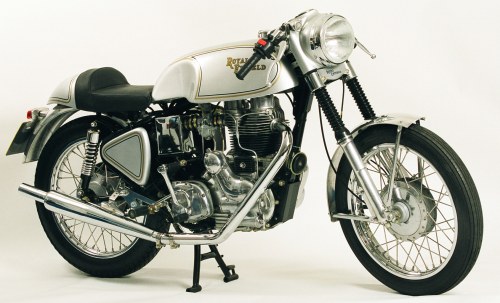 As I rode back home, I was wondering how I could go about getting a Clubmans 5-speed electric start in my grubby little hands. I rang several dealers, one of whom offered to sell me a 5-speed leccy start Clubmans, but they told me that I must not let Watsonian know about it. Why I have no idea [probably because the Sixty-5 Sport was on the way, and if we’re real lucky then RealMart will have a pic of one for us. TP][Ting! Your wish is my command, etc. RM]. But the upshot of this was that after a few weeks of hassling this dealer, he could not deliver the goods.

Enter the Bike Centre down in Dorchester. They are the nearest dealer to me, and offered me a test ride on whatever Enfield I wanted, so in late July 2003 off I went on the trusty Trident to try out a 5-speed Bullet. On arrival I was promptly escorted to a blue Bullet Sixty-5, and was invited to ride it as long as I wanted to. Off I went, and what a change from the 4-speed version. The 5-speed changes were really crisp, and I did not miss a single gearchange. The electric start was faultless.

Having five sensibly spaced gears made a huge difference to the bikes performance over the old 4-speed Albion-based box with its ratios spaced so far apart. I thoroughly enjoyed the ride around the Dorset countryside, and was sad to have to return the bike. By now my mind was made up. I wanted one and sat down with Ron, the proprietor of the Bike Centre, to get one ordered. 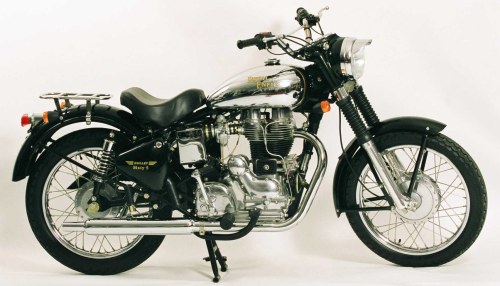