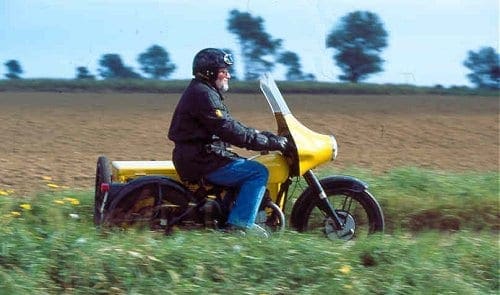 Steve Wilson rides an ex-AA patrol Beesa, and finds terror and delight — at less than 40 miles an hour!

I’d never ridden a motorbike and sidecar before. ‘There’s nothing to it,’ grinned the cartoon artist Nick Ward cheerfully – but then he would, wouldn’t he, because a) he ran BSA M21 outfits as his primary transport for many years, and b) had sold the test outfit to his neighbour Dave Watson. And as I got ready for a first go on the BSA and sidecar, Nick and Dave were exchanging looks with a gleeful edge not too far below the surface. ‘Nothing to it’, hell — I know I’m in for trouble.

To be fair to Nick Ward, when I’d talked to him earlier and aired my, ah, concerns (‘but when you go round left-handers, doesn’t the sidecar wheel lift?’ etc), he’d pointed out that with the well-tempered M21 outfits, that sort of thing wasn’t really a problem. If you wanted to be uncharitable about it, the 600cc side-valve single’s 15bhp output, when linked to over 200lbs of sidecar, just wasn’t powerful enough to get you into too much trouble.

The AA outfit in question was the earlier kind, with just a plain box sidecar, not the ‘plastic fantastic’ streamlined fibreglass type introduced from 1961-on. And this M21 bike didn’t have the later 12-volt, crankshaft-mounted alternator to supplement its 6-volt Magdyno and help with the auxiliary equipment, which by then included radios. It also didn’t fit the higher ‘Western’ handlebars with which these models were catalogued, or the metal legshields often featured. But there had been plenty of variations among the 2000-odd RSOs (Road Service Outfits) during the Fifties, and it did have the fuller front mudguard and Avon half-fairing; its 8 inch sls front brake had by then been made standard on BSA’s remaining big side-valve slogger. There were no AA logos remaining on the tank or fairing, but it was unmistakably ex-AA, which Nick could confirm. ‘WLN 344 was a genuine AA registration number. It had been in a museum, I believe down in Welshpool.’

There’s always been something inherently comical about the asymmetry of three-wheelers. Think Del Boy’s Reliant, think the Scott Sociable, hell, think Wallace and Gromit. I mean, A Bit on the Side?

But then I watched Dave pushing the M21 outfit around, which he seemed to be able to do quite easily and without fuss; soon I would find that I could do the same. And looking at the well-proportioned outfit, it didn’t seem comical, just a good example of fitness for purpose. There was a Pyrene brass fire extinguisher clipped to the flank of the sidecar, while at the rear a second Lucas 564 tail light balanced the one on the back of the bike; Nick said regulations required this. The front attachment tube connecting sidecar chassis to motorcycle was a graceful swan-neck curve. Whether you like a bike’s looks or not is a personal thing, but I’ve always found the M21 to be a shapely machine; and the half-fairing, tied in by its yellow paint job, suited it. 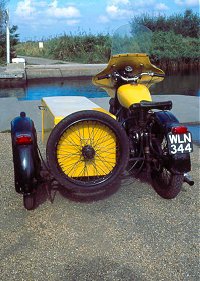 If there was an element of quaintness, possibly it lay in the large diameter, spindly wheel on the sidecar, a 19 x 2.25 inch job, so not interchangeable with the motorcycle’s 19 x 3.25 front and 19 x 3.50 rear covers. This spindliness was most apparent on the spare sidecar wheel bolted to the back of the sidecar box. Presumably the AA Patrols didn’t want to be seen mending their own punctures, and jacking up the fully laden box would have been a real job… But all in all, I found this outfit a joy to contemplate.

It sounded good, too, as I rode along on another bike behind Dave Watson down the quiet Norfolk lanes. But I was glad that those lanes were largely un-trafficked, because it soon dawned on me that these things were seriously slow. The AA men had been limited to 30mph, and we often dropped below that, rarely exceeding 40. Still, no lifting of the sidecar wheel took place.

Then we parked up on the deserted straight road and it was my turn. I eased myself onto the sprung saddle, and everything seemed to fit nicely. The fairing’s screen appeared to be quite close to my head, and the left portion down by the handlebar seemed to give little clearance to my gloved hand – but I would soon forget all about that!

I own a solo BSA M21, so the bike itself was familiar, though with a couple of twists. The ignition advance/retard lever for the magneto, an important part of the big single starting drill, in this case was a spring-loaded device mounted down under the saddle, which made it a lot less easy to use than the conventional long lever on the handlebar; Nick believed that this set-up was not standard. 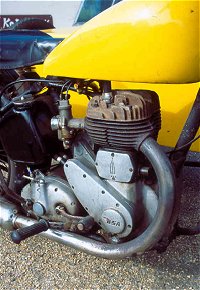 This engine proved an easy starter, and once fired up, the motor also kept going with a wonderful steadiness, no matter what Nervous-Nellihood it was subjected to. So – no more putting it off — here we go. Boot the gear lever up into first, let out the clutch, and…

And why had I let them park it on that patch of shingle?! It was like trying to drive off a pebbly beach. The rear wheel dug in and spun, the sidecar wheel tried to overtake the bike, and for the first time but far from the last, the Norfolk air turned blue as I panicked. There was a deep gouge in the shingle by the time we’d spat a lethal shower of stones backwards and lurched onto the tarmac.

Where things were no better! Sidecar outfits wobble! In desperation, before leaving home for this foolishness, I had consulted my 40 year old copy of ‘Teach Yourself Motor Cycling’, a little blue and yellow book which had served me well while I was learning to ride. On the subject of sidecars, author Dudley Noble (for it was he) observed briskly ‘When first driving a sidecar machine a rider naturally tries to balance himself… as with his solo machine. The result is that the machine promptly runs into the ditch…’ Thanks, Dudley. ‘It is only,’ Dudders continued, ‘when the rider appreciates that he has got to ‘drive’ in similar fashion to driving a car, that he will steer a straight course.’ As a pal had put it, you had to treat the handlebars as a steering wheel.

All right, all right, but meanwhile … the sensation of lacking control was genuinely terrifying! Either I or the infernal machine, when braking or changing down, pulled hard to the right, ie. straight out into where the oncoming traffic would have been, if it hadn’t been for that blessedly empty Norfolk road. Expletives Deleted! A lot of them! Then coming to a halt to re-group, I kept putting my feet down — completely unnecessarily, obviously, this was one bike that was not going to topple over — but down went the feet anyway, before the bike had come to a halt, thus risking getting an ankle trapped and torn in the tubework – but habit was too strong, you just couldn’t not. More expletives!

Underway again, the sidecar wheel was lifting, not on left-handers, but just bouncing up on the inevitable bumps and irregularities of a country road. This was, ah, unnerving, and the bouncing of the springy saddle, counterpointing the minimal movement from the bike’s plunger rear suspension units, added to the overall sensations of wibbly-wobbliness. Though it has to be said that, once accustomed, this set-up did provide a surprisingly comfortable ride. I motored down the road towards a couple of cottages on a gentle right/left downhill bend, all tensed up, which only added to my woes. But there were no real problems – remembering some more advice from Dudley N, I accelerated up to the right-hander then slowed around it, and tried to motor round the left bend. The wheel stayed on the deck. At 30! Hey, this was … OK. So far…

Gently downhill for half a mile, and then there was a T-junction with a busier road. Gingerly, slowly, and with my feet staying firmly up on the rests, I turned the outfit round through 180 degrees and set off uphill again. Hey, that was definitely fun – how often do you get to turn a bike on full lock with your feet up? I negotiated the bends and throttled on a bit down the straight – I was realising that things were better at ‘speed’ than when attempting a slow cruise, or slowing down. In fact I was feeling confident enough to try giving a twisted version of the AA man’s salute as I approached the others and began to pull to a halt, changing down… AAARGH! BIG Expletive! As the braking and gearchanging again sent us half way across the road, from which the chaps prudently leapt for safety. When I did stop it was a couple of hundred yards further on…

But I did another circuit, and another, cautiously growing in confidence. This time down at the T-junction, doing my feet-up turn with real enjoyment, an old boy in a modern Tonka Toy 4WD lowered his window to stare, and then said ‘Keep ‘er going!’ encouragingly, though when I blurted out that it was my first time on a combination, he accelerated rapidly away. 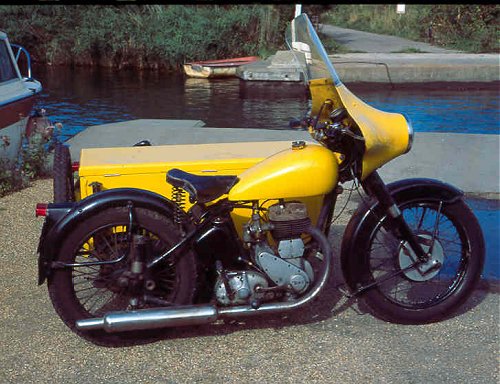 The final reckoning on the Sidecar Experience? Terrifying, but do-able. I’d need a lot more practice before I felt OK in traffic, because stopping was the most hair-raising thing. A sidecar wheel brake, as found on, say, Panther’s proprietary chairs, might be a distinct advantage here.

But I did come to appreciate the pleasingly unified BSA outfit, its unstoppable chugging poke; the details like the period triangular-shaped handlebar grips which made life a lot easier when you had to remove one hand from the bars; and particularly the motor’s sidecar gearing, which meant the power was always there where you needed it – very welcome, and spot on for the work. There was nothing to do about the lack of speed – I did see 40, but 30 for the first time on the M21 outfit was more exciting than 80 on a modern solo!

‘Now you’ve done everything, Steve,’ said Nick Ward, as he took over for the ride back to Dave’s. ‘I’ve flown in an open cockpit biplane, but I preferred the sidecar outfit.’ Then he showed me why. Rounding a sharp left hand bend beside a tall church tower, he deliberately lifted the sidecar’s wheel high off the road for long moments, before dropping it back to earth.

**There’s more about Steve Wilson’s AA outfit antics in the March edition of Classic Car Mart magazine. If you can’t find Classic Car Mart in UK newsagents then call 0121 233 8712 for a copy.