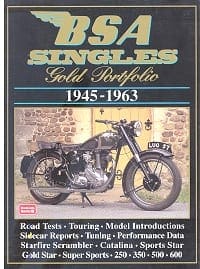 Do you know the difference between a B31, a B32 and a B33? With the aid of this book, you could become a BSA boffin…

The cover blurb suggests that this book concen-trates on the top-notch Beezer singles, the high performance Gold Stars and Catalina special editions, but in fact much of it is given over to period roadtests of the humble workaday bikes which the majority of people would have owned and ridden in the 1950s and early 60s. And indeed, these are the most common old BSAs available today.

This compilation of old road tests, maintenance guides, service notes and tuning tips covers the heavyweight pre-unit OHV singles (B31, B33, M33); the lightweight singles (C10, C11, C15), the last of the sidevalve sidecar tugs (M21); plus B40, SS80 and a few variations on the Gold Star theme. Of the 59 features, about half a dozen centre on
Gold Stars: there are many more articles about bread-
and-butter bikes like the B31 and B33.

The articles are all reprints, mainly from the magazines of the 1950s and 60s. Only half a dozen articles are taken from later, ‘classic era’ magazines and so look at the bikes with any historical perspective — the majority of the information comes from The Motor Cycle and Motor Cycling, so was relevant half a century ago. This is a double-edged sword: it is fascinating to read how well the bikes performed when new but those magazine articles were seldom critical. Plus it doesn’t give you much help if you want to run one of these bikes today, nor is there any kind of editorial over-view to summarise which model might best suit you now, or to point out any known flaws or problems which have arisen over the decades.

So while these articles are charming to read and packed full of information about the bike’s original specification and how it was received at the time, they tend to provide a limited picture of what it might be like to own one today. The performance data is fascinating however, and some of the exploded engine diagrams are priceless — just bear in mind that all the illustrations date from the mono era, when life happened in black and white.

The three-part ‘mini manuals’ for the B31 and B33 are really handy: these originally appeared in the 1980s and contain detailed practical info about these bikes’ development and regular servicing: how to remove and strip the engine, top end overhaul, clutch and gearbox, carb and ignition, frame and cycles plus full specs on B and M series bikes and useful wiring diagram and large-scale technical illustrations.

You do need to be a little careful when searching for info from the book’s contents page – it contains quite a few typos, swapping ‘B’s for ‘M’s, and getting OHC and OHV confused. Obviously not important to the typist, but fairly crucial to the owner or enthusiast!

Overall, this is a useful addition to an enthusiast’s library, but read it alongside a modern publication too if you’re looking for helpful info to inform a buying decision, or to help with running / riding one of these bikes today. There’s a second volume which covers the later generation of BSA singles, too.

It’s an A4 softback with 172 pages and over 300 illustrations and is also available from
Amazon.co.uk