One front drum brake not good enough for you? DBD Brian grafted two BSA 8” front drums together to improve the braking on his Gold Star. Here’s how he did it…

This is a conversion I carried out on my Goldie about ten years ago. As you can see, it’s two Goldie eight inch brakes grafted together. I just thought I’d like something different and maybe it would be an improvement. Plus, I’d get the bonus of upsetting the rivet counters. I didn’t take any photographs at the time, so I have tried to keep the description as condensed as possible.

The left hand bearing/spoke flanges were pressed out of the drums and a slide-fit trial sleeve was made to hold the drums in position to obtain some measurements. At this point I discovered that the spokes would not clear the opposite flange when being inserted with the drums together. 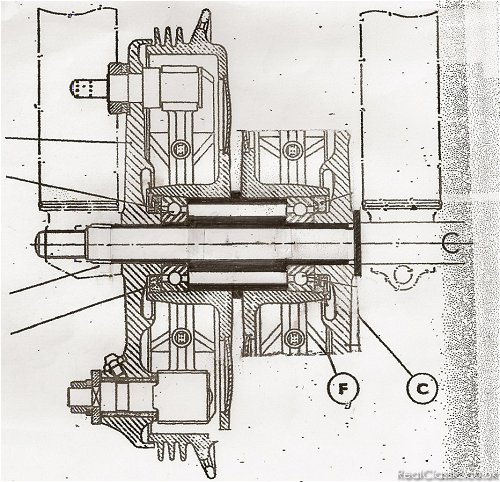 Assembly drawing of double-sided drum, made with the help of a photo-copier.

A new press fit central sleeve was made, the drums were painted and then pressed together on the sleeve with the new stainless spokes in situ, and then aligned in the correct position with the opposite drum. This was a tad awkward with 40 spokes flapping about, (I had to enlist swmbo’s help, mind your fingers love). The rim was then fitted; I used a Dunlop WM2 as there were still a few about at the time, but it did require some attention.

Then an inner central bearing spacer, which is now the full width and also carries the left hand plate, was made, along with a new spindle with a retaining washer for the left hand plate. The bearings and spacer were assembled in the hub, and the rim trued on the centre line of the drums. A friend then took a light skim out of the drums because my lathe won’t accommodate a wheel.

The plate was then machined, new bearing drain and grease nipple holes drilled, the spindle stub reduced and the bore taken out to the bearing inner diameter to fit the sleeve. The weld was radiused on the torque stud boss, and the threads taped.

New operating levers were made in stainless steel and all the old components were re-plated. The brake plates were assembled and the shoes with new bonded-on oversize linings were machined to suit the drums. A new bar end lever with double cable anchor, a compensator assembly and the cables were then made. 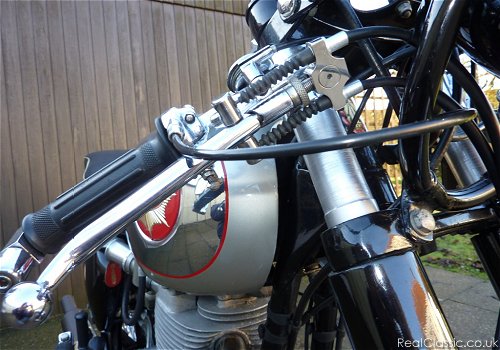 I also made new slightly modified anchor straps, a sturdier centre mudguard stay (out of hydraulic tube) as the original ones have a habit of fracturing, and securing bolts with extended heads, to make life easier as both anchor straps now have to be removed to get the wheel out.

I tried to make the whole thing look as if it had been made by BSA, but was it worth the trouble? Yes. It works very well, much better than a standard 190mm unit but not twice as good as one 8″ brake, as each drum only receives 50% of the operating force.

As for the rivet counters, if I tell them it’s BSA they aren’t always over keen to contradict me, but in reality it’s not to far from the truth, as most of it is.

I hope you’ve found this interesting.