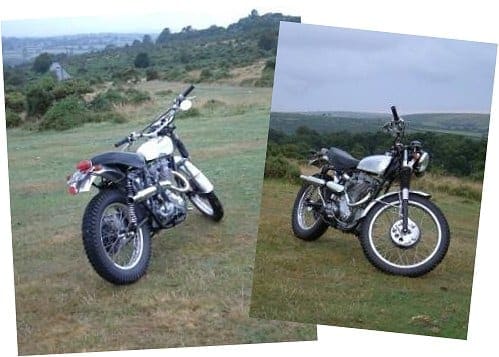 After months of work, Philip Rashleigh’s scrambler-special is coming home and it just needs an MoT and registration to hit the road…

Quite a few people have contacted Roy, who’s been building the engine for me, since they’ve read these articles [Potential advertisers please note! RM] and they want him to build a bike similar to mine. I don’t know how to feel about this, I am in one way happy that people like the bike enough to want to emulate her, but sad in another way. She is my bike, built to my ideas. I know that the parts that make up the bike are off-the-shelf BSA or copies of BSA items, so it’s not that hard to do what I have done, but I would still hate to see ‘clones’ of the bike. Although perhaps my bike is itself a clone of something I have seen! Who am I to judge? I know there are many works bikes and other scrambles Goldies which may have influenced the build of mine…

It was the moment of truth.

Could I start her?

I have to admit it took me four attempts, due to over-retarding the mag, but I got her started and took her around the block to see what she was made of. I got her into third and had about 40mph on the speedometer to show for my efforts. I was struck by the response to the throttle, the noise, how easy the gear change was and the amount of engine braking on tap. I never used the front brake at all as the bike stopped 5 metres before the junction on the engine braking alone.

Next came the MoT so I checked the bike for things it might fail on. I moved a cable and oiled the twistgrip but everything seemed fine. Meanwhile a friend popped over to view the bike — he has heard so much about it and wanted to see if all the fuss I’d been making was worth it. This chap owns a hardtail chopper with a 1000cc iron head Sportster motor fitted, and these motors are not known to be the easiest engines to start. He’d heard stories about how hard Goldies are to get going.

He was shocked that I was wearing deck shoes. He won’t go near his kicker without stout footwear with thick soles and lacing well above the ankle. I wheeled the bike out of her home, turned the fuel on, primed the carb, brought the engine to compression, pulled in the decompressor and eased her over, retarded the ignition and then, bringing the kicker to the highest point, I put in a lethargic kick…

She fired, then stopped. I reset the mag and brought her up to compression, eased her over a second time and then kicked. We had life! I let her run and then fully advanced the mag, the exhaust note changed and she responded very quickly to a few twists of the throttle. After a few minutes I killed the motor and my friend was a little upset! The bike seemed so easy to start.

He then had a good look over it, picking bits out that had been made for it, the front brake and a few other little bits and bobs. He was quite taken by the bike; he liked the narrow alloy tank, although the bars seemed very wide to him, but in general he was happy with how she felt. 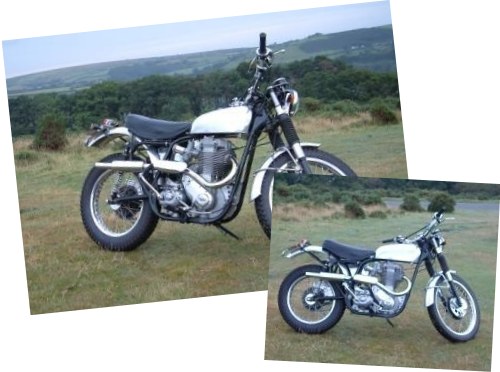 Onto the MoT, always a nail-biting time, which involved a little trip in a van. We arrived in plenty of time to get the bike unloaded; the tester entered her details into his computer and then wandered outside to view the bike. He was in raptures over the bike and wanted to know about every little detail. He isn’t a Britbike kinda guy but does like the older bikes. He was amused by the separate engine and gearbox (it’s pre-unit) and spent a few moments asking about how it all worked.

The tester wanted me to start the bike up as he admitted he didn’t have a clue how to do it. I was under pressure to get this right, so the ritual was performed and it was starting to become familiar…


Random B31 stuff on eBay.co.uk

We unloaded the bike again, stuck the plate on, bought a gallon of Premium fuel and, although it was now 7pm, I couldn’t wait any more. On with the riding kit, out to the garage and — now the moment of truth — would I like it?

I wheeled the bike into the back lane, got her started (first kick) and donned the lid and gloves. We were off, up into second, then third, stop at a junction, note that the TLS front brake is very good and off again. We covered six miles and I was very happy with what I had done. The next evening was more of the same with a stop at Captain Jaspers for a coffee and a pose around the Barbican and Plymouth Hoe; this was interrupted by rain but it didn’t matter.

The next evening was for polishing. I find this a good way to keep a close eye on the bike and make sure nothing is lose, cracked or about to jump ship. Then I ran the spanners over every nut bolt and screw I could find. I found the deliberate mistake: the hardest to reach head through bolt was a little loose and I needed to take the exhaust off to nip it up! I know this was Roy testing me to make sure I was looking after the bike…

Then few days later I did a full oil change of the motor, gearbox and forks, and took it for a quick spin to make sure everything was OK.

Next up, I wanted some feedback from another RC regular. And NVNL volunteered to give the scrambler a spin…