He’s nearly ready to put his bitsa Beeza back together again, but Phillip Rashleigh’s project bike has turned out to be just a little bit different to his original intentions. Gold Star scrambler, anyone?…

As a restoration proceeds, plans often change. I had planned to use the original B31 crank, however I was offered a DBD crank with the mains and big end replaced a few 1000 miles ago by a chap upgrading to a steel item.

Why road-riding Goldie owners do this is, to be honest, a little beyond me. It’s not like they are thrashing the things to an inch of their lives and need the security a steel crank will give them! But who am I to argue? The DBD crank was at a price that I couldn’t refuse — it would have cost me just as much to get mine built up with big end and mains. The thing is, the cases require a little ‘modification’ to fit the DBD crank and although I am capable of doing the work, I do not have the facilities.

Thus a quick call to Roy and the cases, crank, timing idler gear and oil pump were sent on a little holiday to Bedfordshire.

With some disgrace and a touch of a red face I have to admit I also asked Roy to build the bottom end for me. It makes sense as all the components are with him, and he can take a look at shimming the crank and setting the oil pump up (something I was dreading as the drive can shear if you get it wrong). Oh, and he has an engine cleaner and bead blaster to make it nice and newish looking!

To the barrel… well, I have been around the block with this time a few times now. I do own a ZB34 barrel, but it has to be said it is in a very poor state. Thus with a DBD bottom end and the shorter conrod (same stroke length) it comes with, Roy and I had a little chat, hatched a plan and we hope to be confusing the tyre-kickers for a few years. Keeping the DBD crank and rod set up also allows me to convert the engine to DBD spec at a later date should the parts fall my way. 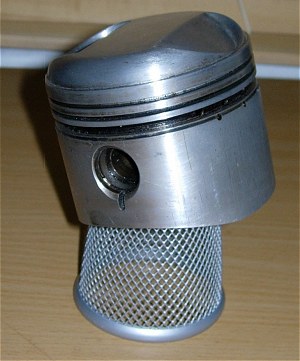 Random B31 stuff on eBay.co.uk

For the cylinder head, the gods of eBay looked down on me and smiled. A genuine DBD34GS Catalina head was up for auction but no one bought it — too close to Christmas. The high(ish) price put people off and no one bid. A quick email to the vendor and a deal was struck, so six days later I had the head (which is now sat on my desk). It is in very good condition, and has been used for dirt riding as there’s mud burned onto it.

Now back to the original conundrum, and the barrel. As I’ve gone the DBD34 route I now need a big fin barrel. These are not cheap either new or used, however Phil Pearson has had a batch made and one has my name on it (or rather Roy’s). Shoot off and email to Roy and remind him to dig out a low compression piston from under his bench, for both ease of starting and sensible off road use: who needs 10:1 or more when you are on a green lane? 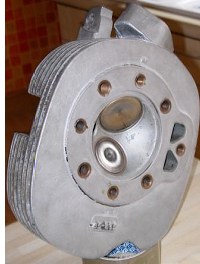 The rocker box was the next problem. These are cast-in on the B Series and ZB Gold Star heads, but from the late ZB / BB engines they were a separate item. Once again Phil Pearson is having a batch made. I am not going for the eccentric rocker spindles as this is a rather expensive way to go, so I am going to stick with the B Series method of rocker adjustment.

So there was nothing more to do than the actual build, and to fit a magneto and dynamo. Simple really, call Sean Hawker, have a good chat and ship off the various bits I have kicking about. Once these are built and tested they’ll go to Roy for the
build.

Any Beeza owner will know how bad a six-spring clutch is. I mean, they were that desperate at BSA they bought Triumph just to get the four-spring clutch! So I have a choice, buy all new items for a six-spring clutch and fit it, or buy all the components for a four-spring clutch and fit it, or buy a belt drive system. After pricing up all three options I will be going for a Newby belt drive. It is marginally more expensive than the six or four spring chain-driven items, however as there will be no oil in chaincase it can’t leak! This wins every time for me.

Spartan are making a few brackets for me at the moment and modifying the engine plates to make them a little lighter. As Sean Hawker pointed out during one of our telephone chats, no matter what you do to a B Series bike the frame is always made from very heavy walled tube, thus the bike will always be very heavy. However if I can make an effort to keep the weight down then it all has to help, doesn’t it? 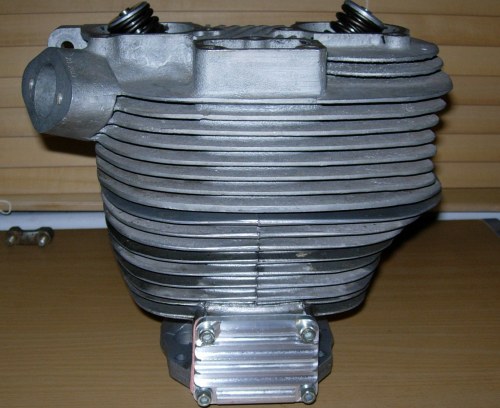 This installment shows a great deal of change in my thinking (go back to the first installment to see what the original idea was!). There’s also been a great emptying of my bank account. I know I would always want to go DBD at some point, but not knowing that the funds would ever be there I took the plunge whilst I could.

I have a cunning plan for the exhaust. I was always going to go high level and have a high level pipe here, but seeing Scrambler Goldies with a low pipe has changed my mind and so now I am going low level. The pipe will be made open and then a ‘Glass Pack’ baffle kit for a Harley Chopper will be used to keep the noise down a little — but not too much

Next time, engine together, and bike running? We’ll see…