Phillip Rashleigh’s off-road project bike suddenly needs suspension. Forks, shocks, tyres, swinging arm – oh, and something to stop the plot might be an idea, too…

With the project starting to com together, I sent off gearbox for inspection and, as suspected and expected, the bearings and bushes were all well shot. However everything else was OK, which was a bit of good news and something to keep the spirits up. So the box was rebuilt using new bearings, bushes and stainless fasteners.

Back at the sharp end, and the forks. These required new stanchions, seals, seal holders, bushes and a damper kit from Roy which I really like as the large top nuts are alloy and the damper rods screw into these (so you can’t see that it has any fitted).

The lowers were cleaned up and painted and then the whole lot was re-assembled on the breakfast bar in the kitchen one Sunday morning while the wife snoozed away upstairs. I decided at this stage to put rubber gaiters on the forks as didn’t like the look of the long steel shrouds that were fitted to production machines, and most of the pictures of the works bikes I had showed gaiters being used.

Clamping the rubber gaiters to the new stainless steel seal holders was easy, however there was nowhere to clamp the top end to. A quick phone call to Roy solved the problem — he sent down a used set of plunger top shrouds and I used a large cone drill to enlarge the hole. A quick paint up later and the forks were ready. 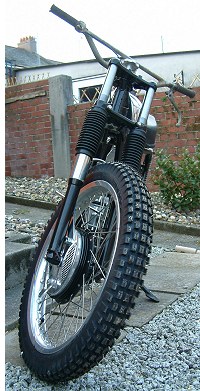 Yokes. Well, what can I say? I discovered that early C-series yokes had been fitted which didn’t line up with the lock stops and after a little searching I found a pair of B-series ones. I cleaned these up, gave them a little fettling and painting, and then a taper head bearing conversion was fitted (I want to update the bike a little) and the yokes were fixed to the frame.

I was getting excited at this point — on with the forks and the front wheel, which now wasn’t centred in the forks. Scratched head, looked at the old stanchions which were straight then looked at the old bushes, which were well worn. All I could think was that the forks were sloppy on the bushes and this had given a false reading when I measured the offset. I got the wheel centred again, and endured the withering looks from the builder.

Then I fitted the new alloy engine plates and Antipodean-made sump guard and side stand. Now I could take a step back and look at the bike which was really taking shape. I could have fitted the fuel and oil tanks, seat and rear guard at this point but I didn’t want these to get damaged.

About this time I bought a pair of tyres. This may sound like a simple statement but it took a lot of research to find what I wanted. Now I could have bought any old knobbly tyre but I do have some half-assed plan to use the bike for a little green-laning, so I spoke to a lot of people and it seems that the Pirelli T43 is the tyre of choice for this type of work. It also looks right.

After a quick call for help on the RC Message Board I decided to fit the tyres myself and, heeding NVNL’s words to do it carefully, I only managed to pinch one tube and very lightly scuff the rim when the tyre lever slipped off the plastic rim guard…

Onto the swinging arm. The original was cut off the bike as the metalastic bearings and shaft had seized solid and we couldn’t get it to move. The replacement part was blasted and required a few lugs to be welded onto it.

As for the bushes, well a cunning plan was hatched. I use Roy Shearwood a lot, he has a huge amount of experience with B-Series BSAs and has made and used a bushes from a N*rt*n (I need to wash my mouth out now). So the swinging arm has been narrowed, new bushes and spacers made up, and grease nipples fitted to the arm. 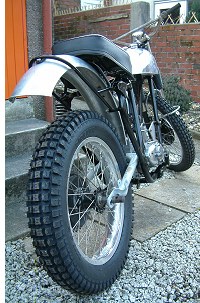 I expected a real struggle getting this to fit. I know I measured the space where the arm went, and I know Roy is good at his job, but (amazingly) this went in like it was made with the bike there as a pattern, not 400 miles away. This is good as I know I will never be at the mercy of the dreaded metalastic bushes again.

Rear shocks have been ordered from NJB and are 14-inch in length. I wanted Falcon Shocks but can’t at this stage justify the cost.

With the 21-inch front wheel, the bike will sit fairly level if not a bit high. I have short Cornish (31-inch inside) legs and I am on tip toes when sat on the bike, which should be interesting when I finally get the engine built and get the chance to kick her over.

Onto the brakes. I was going to stick with the half-width 8-inch item I have up front and the modified A65 stopper out back — but fate came my way. I was about to clean up and re-install the back plates when Roy (again) had a batch of Taylor Dow copy 2LS front brake plates complete with shoes and all the operating parts on sale. I thought long and hard about this.

Do I need what was the top BSA front cafÃ© racer brake (after the 2LS conversion 190mm) on the front of what will be a green lane machine?

To be honest? Yes. I had a go on an older bike with SLS set up on the front in modern traffic and I do want to be able to stop, and live to tell the tale! How the 2LS item will stand up to a bit of off-road abuse… only time will tell.

So the next push will be with the oily parts. Oh joy… 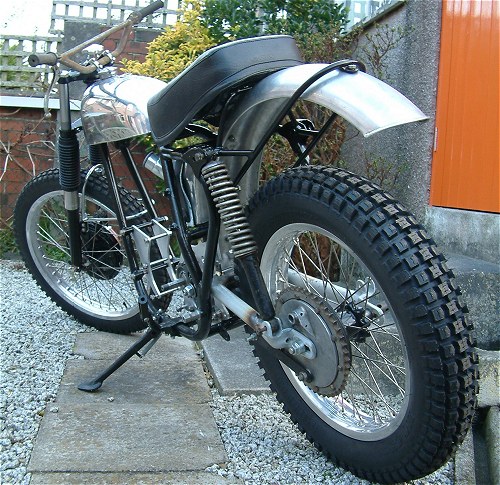