What was that about ‘once bitten’? it didn’t apply to Phillip Rashleigh. After a bad Britbike experience in the 1980s he’s come back for a re-match…

I guess I had better start at the beginning and then move onto where I have got to, and then head to where I am going to finish. Like all good stories this has a start, a finish and an end.

A bit about me; I have had a bit of experience with classic bikes. I tried and failed to rebuild a Triumph T100 / Speed Twin when I was much younger, back in 1986 (ish). I came away from that experience with hatred and distrust of Triumph part suppliers and the classic bike industry as a whole.

Times change; you get older and you get wiser and you know what to ask and the like. After several years (15!) messing about with Minis and Land Rovers, it was time for another classic bike. But what? God only knows, the traders still want stupid money for scrap and anything needing a rebuild is astronomical.

So should I go the Jap route and pick up an emerging classic from my youth? I have always loved RD350LCs and YPVSs (Young Persons Vile Screamer). I came very close to buying one of Japan’s finest teenage hooligan bikes, but five years of hinting and pestering paid off at the last moment…

A very good friend of mine was going through a life crisis and had decided to offload his two retirement projects; a B33, all together and original with a few ‘period’ items but not run for 25 or so years, and 1956 B31 donor bike / almost basketcase.

I went for the donor bike — it was cheaper!

What I got for my money was a frame (slightly hacked about), engine, gearbox, back wheel, forks, oil and fuel tank (not bad I hear you think). Oh and the whole lot had been turned into a scrambles bike sometime in the Sixties, just to add some interest.

So now I was at a crossroads. Should I spend time, effort and good money on rebuilding it back to factory fresh — or should I carry on with the scrambles theme? The scrambles theme won the day but… what does a BSA pre-unit single scrambler look like?

I thought; ‘I need books’, so I bought every book I could find on BSA pre-unit singles, and I was surprised to find BSA had actually campaigned these beasts. Foolhardy, brave strong men these 1950s / 60s blokes! 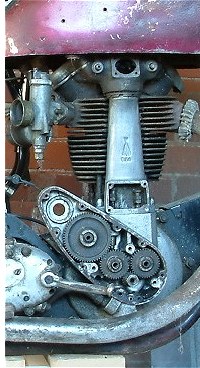 So I knew what I wanted it to look like. How to I get there?

It seems straightforward: start collecting parts and then build the bike up rough. Parts for BSA ‘works’ bikes — ever tried buying them? Don’t; it will never happen.

So I switched to Plan B. What did BSA produce on their production line that was similar to a works scrambles bike?

Not a great deal for this country as everyone is / was obsessed by road-racing or so it seems. Let’s look at the good old US of A and other ex-colonies of the British Empire.

Now it got interesting and I found that the 1956 BSA Gold Star Trials with BB engine was close, and the 1957 BSA B34 Clipper was almost what I wanted my B31 to resemble. OK… but then I found out that the Clipper is in itself a rare bike. Bother!

Much trawling through internet message boards followed, trying to get info and leads to possible parts. I found a chap in the USA who has had a chap in Oz make some Clipper parts for him; interesting.

A few emails around the globe and I was writing to Mr Lee Slocombe, an ex-pat who now resides in Oz, and is a top bloke. Yes he does some Clipper parts and a whole host of other BSA Goldie parts for both the road-going and off-road bikes, made to original factory dimensions and specifications.

So what did I need? Well, the special forward frame-mounted footrests (these bring a new dimension to the term ‘heavy metal’), rear mudguard (fender) brace, 21-inch front mudguard (fender) supports for starters… Not a problem, Lee says, I’ll send you some pictures to see if you like the look of them, if so I’ll get it all in the post. Splendid.

What else? I had found (by accident through Google) Roy Shearwood of RS Motorcycles (which I am told was Tudor Motorcycles). Roy is a great chap and will happily talk though stuff and pass on his knowledge, as well as selling new and used components.

Then there’s Draganfly who are a major force in BSA bits and very helpful — just make sure you have the part numbers. I also looked at eBay and found one or two bits of interest. So that’s the parts supply sorted. What next?

Surrey Cycles would provide the alloy fuel tank and chain guard, and CWC have supplied the alloy rims, all nice people. I have also bought parts from James Holland in Bristol as he uses BSA-based frames for his scrambles bikes. Some of the parts that he manufactures for these can be used where I am having trouble getting originals, such as the fabricated brake pedal and sexy alloy rear brake arm. I am also contemplating getting a swing arm needle bearing conversion from him. Armours in Bournemouth can supply the high level exhaust and alloy guards I would like and, finally, George Prew still makes the single well, three-quarter length saddles.

So that’s the shopping list done. But there were still some items which I needed to find. And one of them was very important! 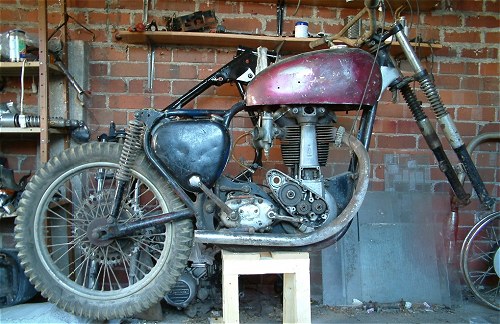