In the first episode, Stephen Dunne left the UK on his D14/4 to tackle a three-month tour of Europe. In Yugoslavia, the Bantam turns out to be good for business…

Back in England I had been corresponding with well-known Italian BSA man, Giorgio Lanza of Genoa. He invited me to stay with him on my way past and I was happy to oblige. Giorgio came and found me whilst I waited in Central Genoa and I then took my life in my hands, weaving through the traffic while trying to keep up with him on my overloaded Bantam. Oh yes; he was riding a Fastback Commando. His garage was an Aladdin’s cave of bikes with about 30 British bikes, ranging from exotica like an Egli Vincent which he raced to a 441 Victor which he used for competition off-road. Amazing bloke. Oh and his wife didn’t like bikes either. Surprise surprise.

Two weeks were then spent living it up in a splendid house, letting my raw rear recover from the miles to date. All too soon I was back on the bike and heading south with a view to crossing the Adriatic with a plan to ride north through what was then Yugoslavia. A ferry was taken from Brindisi to Dubrovnic. It was a long voyage with few funds to entertain myself. Dubrovnic was a fabulous place in the height of the holiday season. To my horror I discovered that I could not get any cash at the bank and, whilst contemplating my options in a bar as one does, I was offered a job working in the same bar because the Bantam had attracted quite a lot of interest and custom while I’d been there.

So for two weeks the steed was chained up outside the bar, whilst I pulled beer inside. Business was very good especially with the Brits, and the owner was very keen that I should stay, offering me all kinds of unprintable bonuses (my wife might read this!) if I stayed for the months of July and August. Having generated enough cash to see me right for a few weeks I departed Dubrovnic. I headed north up the stunning Adriatic coast at a leisurely pace, and eventually returned to Northern Italy via what is now Slovenia.

I had wanted to visit a friend in Milan and after staying with him for a couple of days I set off to conquer the Alps. Unfortunately I omitted to load my leggings and gauntlets when leaving Milan, which was to prove a bad move. I looked at a sign telling me the St Gothard tunnel was very long and decided that I didn’t like the sound of that and so I struck out towards the alpine pass instead.

Now Bantams aren’t very powerful, but I did get up the 20-odd hair-pin bends on the cobbled road to the top of the pass, although I am glad I was going up and not coming down, given the non-existent brakes sported by Bantams. The roads on the Swiss side were spectacular. Fortunately a Bantam isn’t very quick and so I had plenty of time to take in the breath-taking scenery. 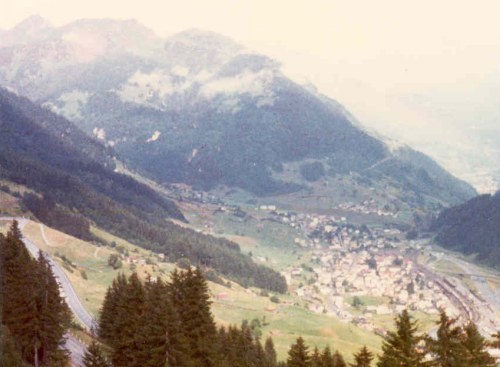 As I started to descend it started to rain and I got drenched, wearing only a Belstaff and a pair of jeans. I have never seen such torrential rain. I passed a small Jap bike waiting at a junction who then followed me. We could barely see where we were going, and for the first time ever my brakes become so wet they almost stopped working. I was heading for Bern and it was still about 100km away and it was about 7pm. My new companion pulled alongside me at a junction. I motioned to him that a bar across the junction looked very appealing. He answered (in perfect English of course) that he lived 2km away and that I should follow him. I didn’t need to be asked twice.

We arrived at his house to be greeted by his bemused parents, who promptly ushered me in, dripping everywhere, whilst my new friend’s Dad put my bike away. I was fed, showered and watered and treated like a long lost friend. Their hospitality and kindness is something that I have never forgotten and is always something that I try (and probably fail) to live up to. 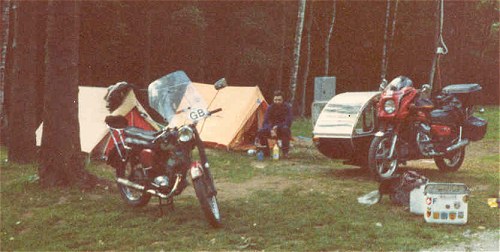 Leaving Switzerland I meandered up the Rhine, stayed with the German BSA club for a weekend of beer, on through Luxembourg to Belgium. In Belgium I was accosted by some Dutch riders whilst looking at a map deciding where to head and was promptly invited back to the chalet they were holidaying. They were keen that I stayed as I made up the numbers as they were sharing the chalet with three girls. This proved a satisfactory arrangement and so I explored the Ardennes for a few days with a bunch of drunken Dutch folk. Seemed rude not to, eh!

And so on to Holland. I rode round Holland and stayed with my new friends in Amsterdam on the way through and then finally I arrived at the BSAOC International Rally on the Dutch coast. In some ways this was an anticlimax as I suppose I had expected a fanfare welcome. Everyone else had experienced their own adventures on the long (?) journey to Holland, and so as much as I was bursting to recount the many adventures en route, nobody was that interested.

For something to do, a few of my pals and I thought we would de-coke the bike. This was the first time I had attacked it with spanners apart from the puncture. Before the de-coke we did a max speed test. I slip-streamed a pal on his A50 with left hand on the fork leg and right holding the throttle wide, with a third pal clocking the speed behind. He measured 72mph. So we set about the engine (we were bored you understand) and cleaned and polished bits with great enthusiasm. Net result was that it then achieved 62mph. Ah. Good example of ‘leave well alone’. 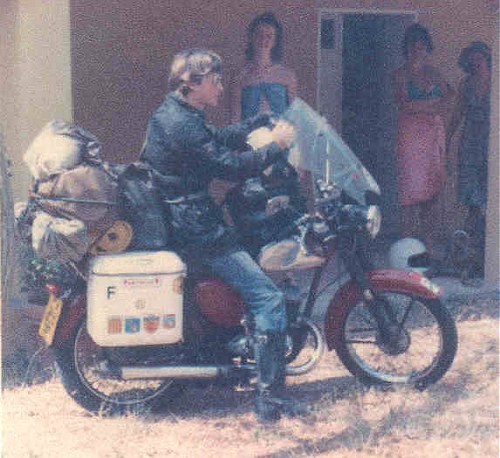 We made it back to England in one piece. The Bantam’s wheel bearings, fork bushes, swinging arm bushes and tyres were all shot. The gearbox then started playing up and when another friend decided to sell his B175 for £100 I bought it as it would be cheaper than repairing mine. I had been away for three and half months. The bike had covered 8500 miles on the epic trip and, although it was thoroughly worn out when eventually repatriated, it didn’t break down at all. It currently languishes in the back of my shed, waiting for me to find the time to resurrect it. One day.

The trip was the best three months of my life without qualification. Amusing things happened to me on virtually a daily basis. My adventure proves that anything and everything is possible if you want to do something enough. A Bantam is a far from ideal bike, but I trust it much further than most of the bigger grown up 4-stroke Brits that I have now.

Can I go again, please?