20 years ago, Stephen Dunne threw caution to the wind and set off around mainland Europe on an 8500 mile journey which would turn out to be the best time of his life…

Whilst consuming beer at a very excellent weekend in Belgium, the discussion moved on to a chap who had ridden over from the UK on a D14/4 Bantam. Certain parties were very impressed with this feat. Impressed, that was, until one of my party asked how far I went when I took my Bantam to Europe. The others looked surprised and amazed when I replied that I had done about 8500 miles. I was then made to promise to commit the event to paper.

Picture the scene. It is spring 1982. We have just endured a really bad winter, three weeks of snow in London where I lived at the time. As a fresh faced 21 year old, I had come to the conclusion that I would only progress in the stuffy firm where I worked if someone died and just could not see myself working there till I drew a pension. I had spent several months in France a few years before and longed to return. My fate was sealed when my photographer father said he needed an assistant for three weeks work in France in May. I volunteered without a thought.

My transport? Well I had used my trusty bike to commute reliably through the London traffic all year and take in a few camping weekends with the BSAOC and so I saw no reason why it would not take me to France and beyond. You have to understand, dear reader, that in embarking on this adventure I did not know any better. I say this in anticipation of a lifted eyebrow when you learn that the steed concerned was a 1969 B175 Bantam. (Well I think it is actually part D14/4 and part B175, but the engine was B175 and it had the decent forks).

A weekend of planning went into this project and I even took a spare rear tyre as the one fitted was getting a bit low. Enough tools and spares were packed into a huge tank bag. Camping gear was stowed in the Craven panniers that had already been fitted, and a clock was taped to the screen so that I would not miss the ferry.

And off I went.

I allowed three days to get to Provence where the job with my dad was going to be based, and the target for the first day was Paris. All went well until I hit the outskirts of Paris in early evening. I was hoping to get to Versailles to stay with a family I knew, but I could only find signs to a place called ‘Peripherique’.

Knowing that Versailles was on the Seine and to the West of Paris I headed into central Paris hoping to find a sign to Versailles. Of course I now know that the ‘Peripherique’ is the ring road, but if no one tells you these things then, well, it is not obvious — is it? I did get there eventually at about 11pm. Very tired! 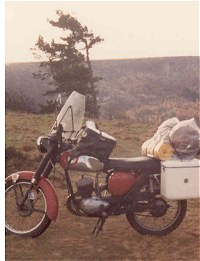 Next morning I set off early to head south. I reckoned on doing 300 or so miles that day. I got as far as Beaujolais country when I had a puncture. I changed the tyre and then had to wait for the garage where I had stopped to inflate the thing as my pump had packed up. A Harley rode past and waved.

An hour later it rode back and, seeing me still sat on the side of the road, they stopped. A big hairy bloke got off the back whilst the rider revealed herself as a very attractive young lady (steady chaps). They fetched a pump and I got going again. As time was getting on I was invited to stay with them, which was very entertaining (it was Saturday night).

The next morning I had to get going early as I had to get to Provence. So slightly hung over I opted for the Autoroute as I had so way to go and it was raining. Some of you will have played with 2-strokes and will know that if you can keep ’em cool then they can go a lot better. A very wet motorway and a steep downhill run can have an interesting effect on a little air-cooled 2-stroke. Suffice to say that I found myself going quicker and quicker and then hit a powerband (a relative term you understand). The speedo was against the stop but everything was vibe free and completely smooth, a sensation not normally associated with a Bantam or any other BSA for that matter (cue complaints from R3 owners).

The rain kept falling and the Bantam was flying. The motorway was full of coaches heading for Spain and the World Cup and they were only doing 70 and so I found myself whizzing past these coaches in the middle lane. Uncommon Bantam territory and as many of the coaches were English I attracted many waves and much amusement. Later on at a service station one of the coaches was arriving as I was setting off and several footy fans came over to look at the bike as they had not believed what they had seen. 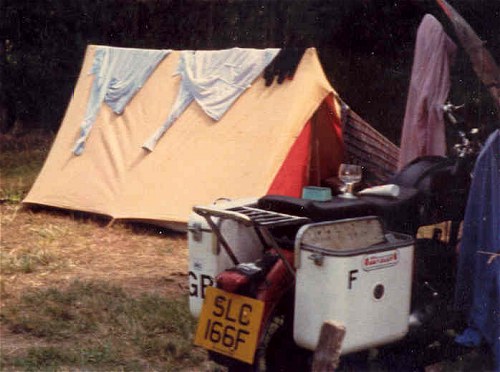 Spending three weeks in a nice hotel in Provence is very bad for a camper as returning to my tent was quite a shock to the system. I now had four weeks to kill before needing to arrive in Italy where my folks had rented a friend’s house for a two week holiday. These four weeks saw me visiting various friends in France, popping over the Spanish border, visiting Andorra and then heading to Italy via Monaco.

In The Next Episode: