We’ve heard Shaun’s story about his Beesa’s rebuild, but now Mike The (Geordie) Mechanic tells the tale of the engine’s internals……

I thought I’d fill in some of the gaps in Shaun’s A10 engine rebuild story… of course, this is only my side of the story and so all of the events are true and the names have not been changed to protect the guilty!

It started some time ago after meeting up with Shaun. I knew he’d done a good mileage on his A10 and that he’s been using (as he puts it) cheap supermarket 20/50 oil and had been running it without a filter. Well, as an engineer, I was intrigued to see how the engine was doing. There has been a lot of debate in various forums (should that be fora?) [Probably. Might be fori, even. But have you heard how everyone refers to ‘referendums’ these days? Shocking. TP] about oil and whether or not to use a filter, so the opportunity to see first hand was, to me, a very worthwhile experience.

Needless to say, Shaun had no idea of the bike’s previous history – when it had been rebuilt, what mileage it had done and what oil it had been running on so, in real terms, it was a totally unknown quantity. Then after riding up to the BSAOC North East Branch Camp – the best I’ve been to by far – the opportunity presented itself. As Shaun has said in his article, his bike didn’t make it home!

I won’t go into the detail of stripping the engine – we all know how to take them apart – but I was amazed at the amount of wear and damaged this engine had sustained, particularly running on a multigrade oil which, even if ‘cheap supermarket oil’ should give far better protection than the ancient oils produced in the 1950s! In spite of all this, the engine would have got him home had the tufnol teeth on the auto advance unit not decided to leave home…

An exhaust pushrod was broken – and I didn’t find the missing bit; the camshaft looked like it was made from a very soft cheese; the cam followers were identified only because of where they were found and the pistons and bores were so heavily worn that I could have dropped the barrels back on without compressing the rings! 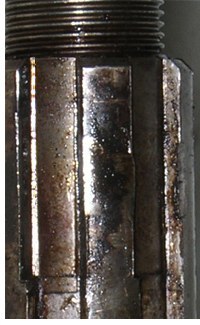 Now, Shaun is a good lad and he is very well intentioned but he’ll tell you himself, he’s not really into engineering. Having said that, he took on board very quickly the seriousness of the state of his engine. So, having rebuilt it a some cost to the lad, we now both know the condition it was in when finally put together.

At this point I should say – yes, I made a mistake – I asked the engineering company to make a new bush to suit a nominal regrind just to clean up (why go to a specified undersize regrind and waste material if you don’t need to?) and I relied on their tolerance for the bearing. I did point out to Shaun that I thought it was too fine a fit given the material but he was in too much of a hurry to take it back to them to have it taken out a thou more. Well, we tried running it on 10/40 oil but no, my suspicion was right, it needed more clearance! 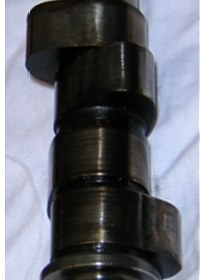 I’ve learned my lesson there – go with my engineering knowledge and don’t hand back an engine until it’s done to my satisfaction. Anyway, it’s now all back together and I look forward to opening it up again after another 40k miles to see how it has performed.

Shaun is under strict instructions to run on a proprietary brand oil – with a full additive pack – and he is running it with a filter which is most important because the additives keep the wear particles and combustion debris in suspension and they need to be filtered out. I won’t go into the merits of filter types as this has been done to death and anyway, it’s a matter of personal choice!

So with this in mind, and with Shaun’s infamous high mileage runs, I soon hope to be able to say with knowledge and experience just how well and

how far these old engines can go with a bit of careful preparation. 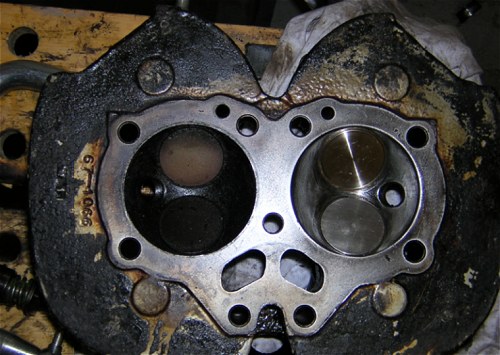 A10 heads are solid and dependable. The working surfaces of this one have cleaned up nicely. No sign of valve seat recession on 40k miles of modern paint stripper fuels!