Not all restorations are accomplished in one fell swoop. Dean Southall’s Beezer has been steadily reconditioned over the years – until it got to be so good that it won its class at the 2003 Stinkwheel Show…

When I bought the 650 for £1500 it had been restored about 10 years previously, used a little and then left in a shed to go rusty. I serviced and polished it and after getting an MoT I started using it. It is my main bike so I have gradually improved it while keeping it on the road as much as possible.

Early on however it had to come off the road so I could strip the engine down and check it thoroughly. While it was apart I decided to spend over £500 to have the big end oil feed conversion by SRM. Now I don’t have to worry that wear in the timing side bush will result in restricted oil flow to the big ends.

I also found there was a small crack developing around one of the bosses through which a cylinder head bolt passes so I tracked down a brand new alloy head at British Only in the USA. I also had the barrels re-bored and fitted new pistons, valve guides, valves and springs.

‘At the conclusion of our test, the Super Rocket was delivered back to the dealer with real regret. It had shown itself to be a thoroughly attractive and powerful mount. It should appeal strongly to any type of rider – either beginner or seasoned. It possesses excellent manoeuvrability and speed coupled with a reasonable gas mileage and second-to-none comfort for long distance rides.’

Changing gear down from third to second gear was pretty clunky so over time I replaced just about every component in the clutch and rebuilt the gearbox. The change from third to second is still not that smooth — but I guess that is just how they are! During the clutch rebuild I fitted a special alloy pressure plate with roller bearings developed by SRM. I now have a beautifully light clutch and no clutch slip.

‘In 1958 the sports 650 became the 43bhp Super Rocket. Its compression ratio was raised to 8.5:1 and there was a cylinder head redesign… and the Amal TT carburettor was replaced by a large bore Monobloc. In many ways the Super Rocket resembled the iron-engined A10. For me, the A7/A10 parallel twins are the definitive British motorcycles of this period, and possibly of all time. ‘

The wheels and tyres were generally OK, or so I thought until a rear wheel blow out at 60mph (downhill with my wife on the back). Corrosion inside the rim had perished the inner tube. I made the long-term investment and paid the extra for stainless steel rim and spokes (I intend to keep this bike until it appears in my will). Rims and spokes were supplied by Central Wheels of Coleshill (I’ve always had helpful service from them) and the wheels now look A1 (and will go on doing so).

The silencers were getting a bit grotty and one looked particularly bad after falling off (at 55mph) and colliding with the door of a brand new car which was coming the other way. However the chrome on the silencers was already going as the battery was regularly cooking and spilling acid onto them!

New silencers and an electronic voltage regulator have sorted those problems. I obtained these and most of my bits for this and my other bikes from Gaggs in Nottingham. Gaggs have been on business now for 101 years (yes, one hundred and one!) and what Alan and Arthur don’t know about classic bike parts probably isn’t worth knowing.

The bike was off the road for most of 2003 to get the tank and mudguards refurbished. They were original and in good condition but the paint and chrome were getting so bad that the steel underneath was at risk (I could try to avoid riding when there is salt on the roads but my bikes are for riding!).

The tank was re-chromed by Derby Plating. I had a lot of work done by them over the years and it is absolutely first class. It is expensive but you get what you pay for. And I suppose I should know as I worked as a chrome plater after finishing school.

The paintwork was done by Ian at Precision Paintwork and really sets the bike off well.

‘In 1958 Motorcycle News tested a Super Rocket which returned 52mpg over some 3000 miles. It was constantly cruised at between 70 and 90mph and would accelerate smoothly from as low as 40mph in top gear. The front brake was first class but the rear spongy, thought to be due to cable control. Handling and comfort for both rider and passenger were praised, but the exhausts were deemed rather noisy at high speed.’

I use Avon Speedmaster tyre on the front at Dunlop TT100s on the rear. The bike has done about 7000 miles on the rear tyre and I guess will do about another 2000 before it needs replacing.

One aspect that has been disappointing has been the reliability of the magneto following rebuilds. I’ve had it done twice and each time its lasted about two years. I would consider fitting an Alton alternator in place of the dynamo and then going over to coil ignition. In fact I’m going to try this on my current A10 project. However I have just had the magneto rebuilt by somebody who comes on a recommendation so I am more hopeful of prolonged sparks.

Another area that limits the BSA is the front brake. It can really shift and I have no trouble in modern traffic on the M1 until they all put their anchors on!

However, even with those problems, if this particular bike vanished overnight I’d replace it with exactly the same machine!

‘By 1959, BSA’s A10 was fully developed. It had good brakes, a willing engine and great looks. The A10 was to prove a hard act to follow’ 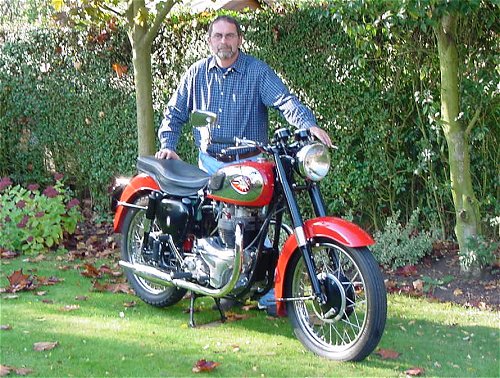