An Edwardian motor bicycle with ‘modern’ features, one that doesn’t frighten the horses? The ideal, well-sorted winter classic bike? Must be Steve Wilson’s old BSA M21. He’s saying goodbye, so it could be your M21 if you felt so inclined…

Bit sad to be penning this, really, as it’s a farewell, as well as an advert, for my old BSA M21.

Four bikes is just one too many at this stage in our household. So an eight year, 10,000 mile partnership with the big BSA single is going to have to come to an end. But we’ve had some times.

Purchased from Andy Tiernan, the 1955 600 side-valve was then given a thorough going-over by Sean Hawker in Bristol, who currently runs CMES, the classic electrical specialists. Sean had then recently returned from a trip half way round the world (Southern Russia, China, India, Australia etc) – by M21, of course.

Cycle parts were overhauled, with new steering head and wheel bearings fitted, among much else; electrics were renewed and converted to 12-volt (the M21’s lights are the best of all my Brits); and later the magneto was rewound. After a couple of years the engine was stripped, the big end renewed with genuine Hoffman rollers and the main’s ball races replaced; new rings were fitted, along with high tensile cylinder head bolts, plus nickle-chrome valve seats to allow the safe use of unleaded (though this may have been overkill, in view of the side-valve’s documented ability to run on a paraffin mix!) The old Monobloc carb was replaced by a new Concentric five years ago.

Thus fettled, Sean and I took a 1500 mile run to the Shetland Islands for the bi-annual motor show up there (there’s one this year – it’s a great gig and the details are in the Events listing). You’ll find an account of that trip in my book ‘Down The Road’ (published by Haynes and available via the books section) – provenance or what? – and I’ll be giving away a signed copy of the book to whoever buys the bike. 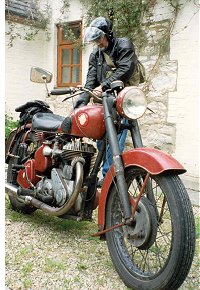 Another epic run was to the John Bull rally in Belgium, and then up to Amsterdam for R&R afterwards; that was also written up in Real CBG. The silencer fell off on the way home, but otherwise, then and nearly always, the BSA’s reliability, including dependable starting, was a strong part of its appeal. And it has been a good daily driver – keep the spring-boxes well-greased (and never mind the passenger’s ankles), and the customarily reviled plunger system works remarkably well. Being a 600, it will cruise at 55 all day, and handle motorways at a steady 60. Max speed is just over 70.

The front end is off an A10 twin, bringing the benefit of a good single-sided 8-inch front brake, as found on the AA’s M21 outfits. And if it matters, after replacing the toolbox and rear light fitting, as well as sourcing a lifting handle, all the tinware is

The brush-painted maroon finish (‘painted with a tar-brush?’ queried one wag) including the black wheel rims, means you don’t have to worry about taking it out in any weather (its soft power pulses have proved remarkably useable in a few inches of snow…).

If I had to sum up the M21’s appeal, I’d say it was the Edwardian, heavy-flywheel, low-set sprung saddle motorcycle experience, but with ‘modern’ benefits; decent lights, tyres (it had new Avons fitted last year), and brakes. It’s been a joy in the lanes round our way, and regularly gets a wave from local stable-yard lads, as passing nervy and expensive horses, you can retard the ignition and back off the throttle to drop the engine note down to one muted thud every telegraph pole.

I shall miss it. 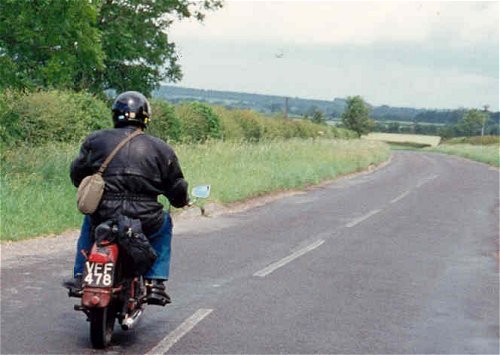 Check out the RealClassic Classified Adverts for the M21’s asking price and contact details.