Sidecars are a natural attachment to traditional classic bikes. But riding them does require a little skill. Paul Friday tells a victim’s tale from his first (last) sidecar encounter…

I have a memory of drawing my perfect space rocket, from when I was at school. It had everything: living pod, missiles, radar dish and an engine to make the stars look dim. I knew there was no air up there, so I had arranged all my components in a line like birds on a wire, with the engine out at the far right hand end. The teacher tried to tell me that this would make it go round in circles and never get anywhere, but what did teachers know?

My girlfriend’s big brother had a motorbike and sidecar. He had lots of motorbikes, but this one had a third wheel. It was a BSA M21 with a double-adult sidecar. He was selling it. The only problem, and the second most important thing in my life, was that I had no money. So my mate Dave bought it. Now Dave was a hardened motorcyclist from the biker mold. He had started on a 75cc scooter and graduated to large lumps of filthy metal. He was becoming one himself. He had the beginnings of a fly-strainer beard and although his clothes were not yet fully waterproof, they did stick to whatever they touched.

So Dave bought the chair.

The elder brother went through the starting drill, with me lurking excitedly and trying to look cool. The trick seemed to be to use the choke with skill. This comprised an old tennis ball, that was stuffed into the open mouth of the carb. The knack seemed to be to avoid blocking it completely, which required a fine juggling act and some degree of spinal flexibility to manage the kickstarter and the other controls at the same time. The mighty single wheezed into life and throbbed like an asthmatic old dog. The handlebars trembled, the tyres shook, the chain flapped. How thrilling this was compared to my boring and quiet Jawa. 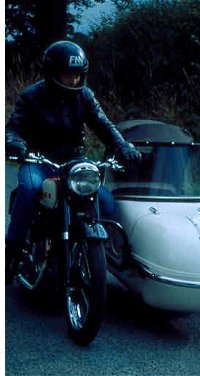 So Dave had a go at starting it. There was a strange flat blatting noise, a scream, and Dave was hobbling around the bike and swearing. Elder brother found this very amusing, for some reason. I was too cool to laugh, and I was still hoping to blag a ride.

With all the controls reset, Dave had another go and the beast backfired. Flames licked around his leg and groin. Elder brother had to be helped up, and many minutes passed until he had regained control of his face. Dave was nearly out by then, and just smouldering gently.

On the third go it caught and settled down to a flatulent beat. Dave was shown the use of all the levers and twiddly bits, and professed himself ready. The outfit was pointing out towards the open road, and I could see the gleam in his eye. I strolled across, with the cool knob turned up to eleven.

The gleaming eye took on a harder look of resolve – Nick was someone he could show the bike off to.

‘I’ll get my kit then. You’ll be needing some ballast.’

I did the nonchalant sprint and managed to be back before the next engine beat, while maintaining that vital air of indifference. But – the dilemma! Sidecars were for girls, but everyone knew that they turned over unless you carried a bag of cement or a lardy chum. I weighed less than Dave, even clean. A flash of brilliance struck me – sidecar racers leaned out on corners. All I had to do was to lean one way or the other to compensate. I clambered over the scaffolding joining bike to chair and took my commanding position on the pillion seat. There was a footrest on the right, and a selection of tubes on the left. I had no intention of clinging to Dave’s jacket in case I caught something, so I placed my left arm on the roof of the sidecar (very cool), and waved Dave forward. 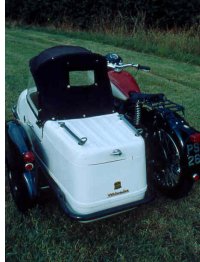 The bike had been parked against the right kerb, facing into the traffic. Dave let out the clutch with a big handful of throttle and we lurched violently across the road. The sidecar body swayed and hit the end of the handlebars. This turned us to point directly at the left kerb. Dave opened the throttle some more and hauled the bars round. We hit the kerb with the front wheel hopping sideways.

So he had another go. We missed the parked cars and made it to the end of the road. I turned to wave, but elder brother had vanished back indoors with Dave’s money. Perhaps he just couldn’t bear to see his bike go. We proceeded at a gentle pace along the road, which suited me just fine. Each gearchange brought a violent lurch as the sidecar body hit the end of the bars, and I could feel everything flexing under me. It was mostly the bike,

The end of the road was a T-junction, which meant a stop and a left turn. Dave had gone very quiet at the front, but we did finally stop right on the line. The traffic was light, and the bike chuffed nicely round the chair as we pulled out. The next challenge was a roundabout.

Going in was easy, but Dave gave it some beans on the exit. The sidecar rose smartly off the ground. I could see the eyes of an approaching car driver, and they looked very wide and very close. We were on the centre line by this point, and heading right at him. Dave was leaning left as hard as he could, with his head pressed against the sidecar window. I did the decent thing, and lay across the roof. The chair dropped with a huge thump, leaving my legs waving over the roof of the car as we passed it. Dave gave it more beans. I climbed back onto the pillion and we howled with laughter, as we snaked up the bypass.

Nick’s house had a long gravel drive that swept on past the house, and a nice gravel turning circle in front of the door. We lurched through the open gate and scrabbled round in a tight right-hander, spraying gravel over the grass his dad made him cut. The outfit slewed to a stop facing out and up the long drive. Nicely done, that Dave.

Leaving the engine ticking over (although I can’t imagine why he didn’t want to go through the starting drill again), we leapt off and fell on the doorbell, laughing like crazed fools. Dave shouted and I peered through the windows. Nick was out. We looked at each other and for some reason both turned to look at the bike. It had gone. Dave spotted it first through the trees along the drive, chuffing sedately along. At the end of the drive was a large private school. We ran.

Dave got to it first and leapt into the seat, grabbing at the brake. The bike stalled. It had been in first the whole time and not neutral, and had made gentle unassisted progress along the ruts in the drive while we banged on the doors. The engine started first kick, but the chain had fallen off when it stalled. Luckily Dave had most of his tools in his pockets, and didn’t mind getting dirty. He finally crawled out from under the sidecar frame, wiped his hands on his jumper and restarted the lump. I spent most of the trip home lying on the sidecar roof.

And you know what? I’ve never been in or on another sidecar outfit. 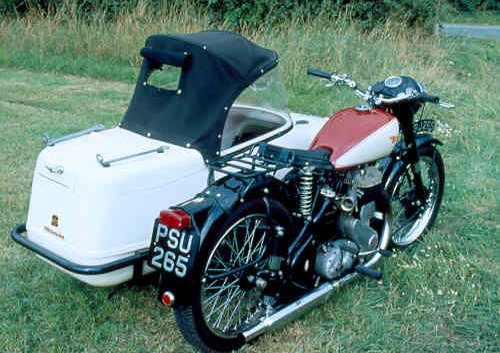