The bikes which were once viewed as king of the heap can all too often be disappointingly tame when revisited. But, says Frank Westworth, BSA’s 1960s flying machine still turns the heads and does the business…

It was, without a doubt, a friend’s BSA Spitfire which made the running in the grammar school grand prix. The same grand prix deafened pensioners and outraged the neighbours when I was a callow youth in Taunton in the late Sixties. Two lads in my crowd boasted Bonnevilles, and one buddy with affluent folks had a new Norton Atlas, but that Beezer was the one to beat.

It was also very fragile, and m’chum had mucho grief keeping the thing running. If he could start it, of course, because although those throaty Amal GP carbs delivered fuel-gulping performance when the throttle wire was at full stretch, no one could accuse them of being conducive to easy kicking.

The Bonnies? Nowhere to be seen; the Spitfire’s combination of hefty grunt and tight cornering left the Triumph pilots wallowing in its wake. And wallow they did, as is often forgotten in these days of careful classic riding. Me? Oh I was nowhere in the hunt. My ancient AJS Model 18 was in an altogether different league (something to do with canine defence, perhaps), and I contended myself with boasting that the best looking girl in the county rode my pillion. Oh yes.

The other thing which impressed me about that schooldays Spitfire was its braking. It carried a legendary front anchor, in the form of the fabled 190mm stopper from the equally fabulous Gold Star. Sadly, on my friend’s machine that brake attempted to convert the energies of forward motion not into heat in the conventional way, but into fearsome vibration. No matter what schoolboy engineering we attempted, that was one frightening stopper. But the roads were less crowded then, and teenagers are always immortal.

Spitfires were – and remain – pretty rare birds. Exactly why BSA’s nomenclature department chose to label their super-sports twin with the name from a relatively ancient fighter aircraft, when the other big twins came from the relatively recent jet age – Lightning and Thunderbolt – is a little mystery, but somehow Spitfire seemed very appropriate for the cobby red rocket. That beautiful glass tank; that neatly humped seat; those Dunlop alloy rims; and those fat bright silencers all add up

to making this the best-looking, as well as the best

-performing, of the Sixties Beezers.

If pressed, I could argue that the BSA Spitfire was the best-looking of the mid-60s sportster twins – it was certainly better on the eye than the contemporary Bonnies which were its rivals, road and track, but beauty is in the eye of the beholder, as they say.

They also say that beauty is only skin deep, and the starting miseries of my schooldays buddy left as much of an impression upon my memory as did the Beezer’s howling performance. Which is probably why I have never owned one myself. 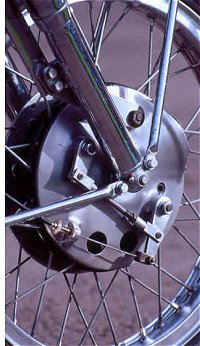 However, that burst of memory stirring over, let’s take a look at what we’ve got here. This, to be exact, is a 1966 BSA Spitfire Mk2. To be even more exact it is a nicely rebuilt BSA Spitfire, and it has been rendered rather more usable than it would have been when it was new.

Someone, sometime, somewhere reached a sensible decision and transformed this most fire-breathing of BSA’s road-burners into a more civilised machine altogether. Ditching the GP carbs in favour of a pair of Concentrics is the most obvious alteration (although BSA themselves did exactly that in later versions of the Spitfire), but the best change is to the front stopper. This previously juddery device has been neatly modified from single to twin leading-shoe operation, while retaining a decently original appearance. And I should say that I was not alone in finding the original brake to be something of a vibratory anti-climax; at least one of the American magazine testers of the time complained of the same thing. Predictably, perhaps, British roadtesters sang the

bike’s praises, mentioning only that its performance

at ‘town speeds’ was but average.

Other than that, this Spitfire appeared to be the real thing, and sat very nice and red with it. ‘Appeared to be’? Well yes; the other mechanical distinction boasted by the Spitfire over its less glamorous Lightning sibling was an elevation of the compression ratio from 9:1 to an ankle-cracking 10.5:1. In these days of low octane and no-lead fuels, I couldn’t see how those high-dome pistons would have survived what was plainly a sensible restoration. 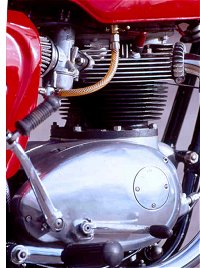 That this was indeed the case was suggested by the bike’s utter ease of starting. Never has a Spitfire growled into life as enthusiastically as this. My schoolmate would have been staggered at the engine’s readiness to run. And to run reliably and happily, too. This lack of starting histrionics was well matched to a reliable tickover and splendidly clean pulling – even at gentle revolutions. Not that determining the rate of crankshaft revolution was particularly easy, given that the big rubber-cushioned tacho shot straight up to an indicated 2000rpm and then stayed there, stubbornly, as clamour from below and an overall sense of acceleration suggested that the crank was twirling rather faster.

Certainly not me. The Spit rasped its way up to the A-road limit in either of two ways. You could chug gently along, changing up as though mounted on a Panther single, or you could screw the throttle back as hard as you might like and tap the right foot shift up a notch when the vibes became way too harsh to ignore. Either way, the tacho sat happily at 2000rpm, so there was plainly no danger of hurting the crank…

Using the revs was by far the more exciting way to get around though, and the four gears were perfectly spaced for the thrasher’s delight. First would carry the aurally insensitive to past 30mph, second would pull that same rider up to around 60mph, and third would haul up to a good 75mph before the clamour from the fifty sweating stevedores down below suggested that top was a very good idea. Strangely, top felt a lot closer to third than third was to second, but the bike didn’t want to run any harder. That was fine by me; wrecking someone else’s engine is not a good way to end the day.

The vibes were pretty severe by 70, anyway. A far, far better cruising speed was at or around the natural A-road speed of 60-65mph, and when instant acceleration was called for, a shift to third was a pretty good idea. This machine was a rasper, make no mistake. 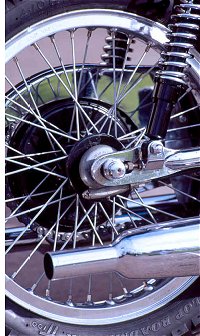 Happily for all concerned, the converted twin-leading front stopper was up to the engine’s performance, pulling the speed down with at least as much enthusiasm as the factory twin-leader which followed it in 1968. It was very good at low speed too, gripping with a predictable and constant bite which is sometimes lacking from old drum set-ups.

What was a whole lot less wonderful was the handling. Or rather, the results of exploiting the BSA duplex cradle frame’s excellent handling. I found out the hard – very nearly the hardest – way that ground clearance on the left was desperately lacking. Picture this: tester, having a good ride on a well-warmed through BSA, cracks the throttle a little more and hacks at A-road speed into a big roundabout. Over to the right, then, hard as you like, until the edge of the boot is smearing the road a touch. Then hard left for exit three…

Appalling – and deeply worrying – crash from below as centrestand digs in. Hard. Undignified and entirely unintentional racer impressions follow, with the bicycle held almost upright while the rider clambers off the inside, all in a happily successful bid to clear the corner.

This lack of ground clearance is far less of a problem when you’re aware of it, but throwing away the stand at the first opportunity would seem to be a good idea. Because this bike steers very well, and very quickly, with the 56-inch wheelbase ensuring easy line-changing, and firm suspension keeping everything well under control. Mind you, the rear shocks look a little short, too, which won’t help the clearance. 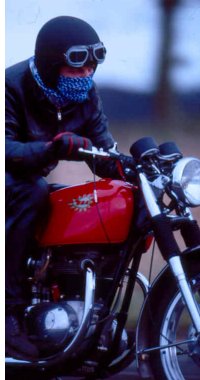 That was in fact my only serious gripe about the Spitfire. The rest of it was all unremarkable by the standards of the time, and apart from a weep of fuel from the very environmentally unfriendly tank top breather, the mechanicals retained their liquids well. Even after a pretty good thrash.

So, at the end of the day, why would today’s rider purchase a bike like this Spitfire? Would it be for the extra performance over the basic Beezer 650 unit twin? That’s pretty unlikely, so the detuning of this particular engine would be no bar to enjoyment, or to pride of ownership. It is rather more likely that you would buy this machine for its beautiful looks, for its stirring redness, and for its rarity in a perhaps surprisingly conformist classic world. The four gallon tank offers a range of around 200 miles, and the beefy pushrod twin’s character – in this state of tune at least – permits an effortless way of covering the ground enjoyably at quasi-legal speeds. But you’d have to ditch that centrestand!